In my younger and more vulnerable years, my father gave me some advice that I've been turning over in my mind ever since. He said, “Never go downtown. Never! It’s dangerous downtown. I moved this family to the suburbs to get away from downtown. I curse the fact that every goddam weekday, I have to drive downtown for work. Why in the hell would you ever need to go downtown?”

Clearly, my father was just trying to keep his family safe from imagined urban mayhem, but his philistine attitude towards population centers could only have inspired in me a stronger desire to seek out the pleasures of The City. His strenuous objections made me even more determined to go—and turned my passion for old movies into delicious forbidden fruit. I loved to go against his wishes! I loved to cross him, to venture downtown for shows, to stand over him with my hands clenched at my sides while he slept unaware, to angrily hiss, “When, old man? WHEN WILL YOU BE PROUD OF YOUR YOUNGEST SON? When will that great day arrive, old man?”

Okay, maybe not the last one, but from the time I received my driver’s license, I took many trips to the late, lamented Varsity theater in Evanston and the late, lamented Parkway theater in downtown Chicago. These were my first “calendar houses”—movie theaters that changed their bills every few days and published a newsprint schedule every few months, so that film buffs could plan ahead.

Yet those dalliances were mere puppy love. Soon I would give my heart to the one that really mattered: Chicago’s Music Box Theater. 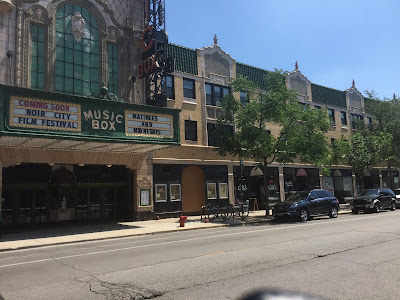 TANGENT: In fact, reading the history of the Music Box theater they have posted on the theater’s website in honor of its anniversary, I have learned about the vagaries of my aging memory. I could have sworn that I first attended the Music Box when I was in high school, but they only reopened as a reparatory theater in 1983, when I was halfway through college, so… My first, laugh-filled screening of Plan 9 From Outer Space? The Varsity! My first encounters with screwball comedies of the 1930s? The Parkway! My first screening of The Searchers? The Varsity!

Still, the fact that I remember so many of these early repertory screenings as having taken place at the Music Box illustrates the place she has come to occupy in my heart and mind.

The inside of the Music Box looks like an architect’s garage sale—there are turrets, hanging lanterns, the screen set into what looks like the façade of a Byzantine palace, the dark azure ceiling adorned with twinkling lights to simulate the night sky, a projected cloud from the balcony lazily creeping its way across the vaulted ceiling-sky. It is beautiful. It is kitsch. The space’s ornamentation—in the 1920s, movie palaces of this type were called “atmospherics”—is one of many reasons the Music Box is the best place in Chicago to see a movie. The theater also boasts the best popcorn, the best ambience, the best audiences, and the best staff. This is a proper place to dream.

At the beginning of my teaching career, I used to bolt out of school at the final bell and race downtown to the Music Box to catch the first screening at 5:00pm. That was one of my favorite things to do after school and I still remember so many of those screenings vividly. I was joined in the theater by senior citizens who no longer had day jobs and other film buffs who were skipping the rush hour headache to join in what felt like a secret conspiracy…a conspiracy of pleasure.

Following recent renovations at the Music Box, framed copies of some of those newsprint film schedules from the late 1980s now adorn the walls of the restrooms and, like the protagonist of Proust’s Remembrance of Things Past taking a bite of that famous madeleine, I find myself staring at them transfixed. They take me back to my early twenties, and I swear I can remember the exact screenings I attended just by looking at those decades-old artifacts.

Memory is a funny thing. I can’t remember what I had for dinner last night, but I can remember that 1985 screening of Rebel Without a Cause… or that screening of Duck Soup… or that screening of The Man Who Shot Liberty Valance! I can recall so clearly the first time I saw such reparatory stalwarts as The Gods Must Be Crazy, Stranger Than Paradise, The Road Warrior, El Topo, Eraserhead, King of Hearts, Two for the Road, The Harder They Come, and Night of the Living Dead, and they were all at the Music Box. I remember the sweltering summer day I arrived at that theater to see Alfred Hitchcock’s Psycho, only to be informed that the theater’s air-conditioning was on the fritz, but if I wanted to come in, admission was free. How could you pass that up? I believe it was 120 degrees inside that theater: I made it to the famous shower scene, and then I had to leave. I needed a shower myself.

I remember the Friday night that Christopher Lee, in town to head up the judges’ panel at the Chicago International Film Festival, stopped by the Music Box to introduce a screening of The Horror of Dracula. He talked of his decades-long friendship with Peter Cushing and what it was like to film those early Hammer horror hits. When the film finally started, it was a battered and bruised, worn-out 35mm print full of jump cuts and scratches—most of us there would have gladly skipped seeing that terrible print if only we could have had two more hours of Lee’s entertaining and informative discourse.

About ten years ago, the weekend matinees often had a theme—so a string of films would be shown in series, one a week. I gleefully attended all of the Thin Man films starring William Powell over the course of six Sundays, at which point the theater announced the next series, “Famous Films Noir.” Well of course I had to see those—and they were followed by three or four other series that I could not pass up. I wound up going to the Music Box every Sunday for the better part of a year and half. It became my church. There is a small apartment building on Irving Park road that I watched being built, brick by brick, Sunday by Sunday, until it was finally finished.

In the 35 years I have been regularly attending the Music Box, there have been many changes to the theater, all for the good. I have seen three different concession stands come and go: the first was a plain, glass-box affair, not nearly fancy enough for the lobby that contained it. In 1991, the John Candy comedy Only the Lonely shot a scene at the Music Box, and the film crew built the theater a new, larger concession stand expressly for the film, which the Music Box then used for years afterward; it was fancy. When the theater bought the record store next door to add a small second screening room, they reconfigured the lobby and built a new, much bigger concession stand along the opposite wall. This larger concession area proved fortuitous when the city granted the Music Box a liquor license to serve wine and beer. Hooray! More recently, the theater acquired the storefront on the other side of the theater and turned it into the Music Box lounge, a wonderful space to enjoy conversations and a fuller menu of libations. Yum! Tip: try the cocktail they have dubbed “The Pickford.” 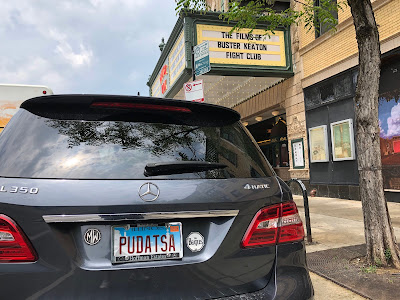 TANGENT: For the last decade or so, whenever I venture to the Music Box, I have an uncanny knack for grabbing cheap street parking, more often than not in the first space right outside the theater’s front doors. My wife has come to call this my uncanny superhero power. When it happens, I like to take a cellphone photo of my car and the theater in close proximity, and I text the picture to friends, my wife, and my son because even though he now lives 2,000 miles away from me, I can still be just as annoying as when he still lived at home. Excelsior! I got my parking spot! Excelsior!

If you love a place, it’s no hardship to imagine spending 24 hours straight inside of it. When the Music Box Theater announced the first-ever Music Box Massacre many years ago, the idea seemed irresistible to both horror fans and old theater fans: a daylong marathon of horror classics and a lobby full of vendors selling posters, action figures, soundtracks, and other ephemera. Such was my OCD at the time (There is still ONE SEAT that I think is better than any of the other 799 in the theater!) that I would get there at 7:00 or 8:00 AM, three full hours before the doors opened, because if I was going to sit in the same seat for 24 hours then by God I was going to get MY SEAT!

The marathon has since been renamed The Music Box of Horrors and will take place this year on October 19th and 20th. This year the event will feature screenings of Shinji Nishimura’s Bloody Muscle Body Builder in Hell, the 1928 The Man Who Laughs with a live organ accompaniment, Buffy the Vampire Slayer, and eight or nine more films yet to be announced. Passes are available in advance for $30. Starting this Thursday—the theater’s actual anniversary date—the Music Box has scheduled a week of special events and screenings. You can find more information about them here. 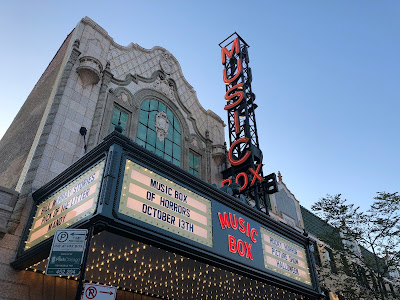 Chicagoland moviegoers are so lucky to have this theater. We are so lucky to live in a city that contains enough zealous and ambitious film fans to support it. I can’t imagine my life without the Music Box. I cannot say that about many other buildings. I studied film at the University of Illinois, and I taught Film Study for more than thirty years at that public school in Northern Minnesota… but my honorary PhD in Film came from the Music Box Theater.