Have you voted? Excellent. I did too. Fingers crossed. In case the anxiety that Election Day and its results prove too much for some of my readers, I offer an escape into the comfortable fiction of political movies from a more innocent time... where everything always turned out okay.

Because everything always turns out okay... right?

I find it oddly significant that three of my five favorite political films are comedies. I can’t quite explain why that fact is significant. Does it have something to do with “the human comedy?” That would be a cliché. Am I more comfortable with comedy in general? Am I like a ghost with an empty sleeve pointing a bony finger and laughing at everything that normal people hold dear? That last line was from Inherit the Wind, which surely would make this list if I had expanded it to ten. 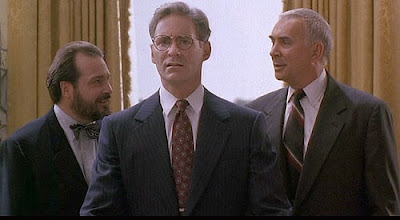 What a trenchant and sweet little pastry director Ivan Reitman and screenwriter Gary Ross managed to bake here. Dave Kovic (Kevin Kline) is a community activist who sometimes impersonates President Bill Mitchell, to whom he bears an uncanny resemblance. One night, the Secret Service asks Dave to do it for real because President Mitchell has slipped into an inconvenient coma. Dave starts impersonating the President full-time. Hilarity ensues. Dave is pointed, yet never forgets that it’s a comedy. Dave discusses important matters like an adult, yet never forgets it’s also a skewed romantic comedy. Dave features a terrific performance by Frank Langella as the villain, Senator Bob Alexander. Dave features one of my favorite scenes in any movie: Dave sits down with the Vice President (Ben Kingsley) and learns what a profoundly decent man he is. It’s like a little primer buried in the film about the prerequisites and importance of public service. Our democracy is one of the few things I find that I cannot be cynical about... and neither is this extraordinary film 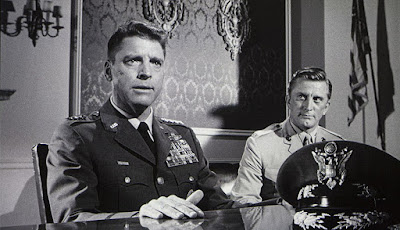 I only came to this amazing political thriller fairly recently. TCM seems to show it so much that it sometimes seems hard to avoid. John Frankenheimer directs; he also gave us the ahead-of-its-time The Manchurian Candidate just two years earlier. Sociopathic Army General James Scott (Burt Lancaster) bridles under the leadership of Commander-In-Chief President Jordan Lyman (Frederick March) and plans a coup. Colonel “Jiggs” Casey (Kirk Douglas) is close to both men and tries to prevent it. Filmed in a no-nonsense documentary style, the film is relentless in laying out just what would have to happen for the military brass to seize control of the Federal Government. This film is a little bit like Dr. Strangelove, but without any of the jokes. Lancaster’s work here rivals his other, definitive sociopath portrayal, J.J. Hunsecker in Sweet Smell of Success, which if you think about it, is also a very political film! 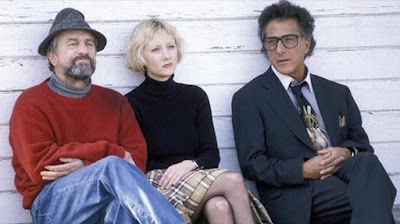 Why oh why did this terrific political satire never receive a Blu-ray release? Is there no justice? Is there no balm in Gilead? Director Barry Levinson and screenwriters Hilary Henkin and David Mamet serve up this ripped-from-the-headlines look at the machinations of a modern political campaign. The President has been accused of acting untoward with an underage girl scout, and so shady political fixer Conrad Brean (Robert De Niro) is called in to do what he does best. Enlisting the aid of Hollywood producer Stanley Motts (Dustin Hoffman, channeling the spirit of Robert Evans), Brean fabricates a war to distract the American people. One of the most cynical American films ever made, Wag the Dog features entertaining performances from an army of fun actors: Anne Heche, Woody Harrelson, Denis Leary, Willie Nelson, Andrea Martin, John Michael Higgins, David Koechner, Harland Williams, William H. Macy, and Kirsten Dunst. This film defines black comedy, especially in its take-no-prisoners ending. Hoffman got all the accolades and nominations when the film came out because he has the flashier part; watch closely though and you’ll see it’s actually De Niro who does all the heavy lifting! 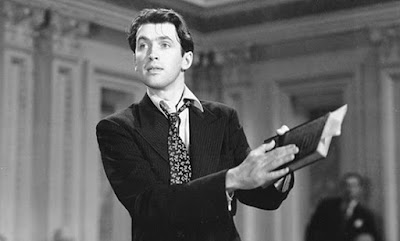 The king of all Hollywood political movies and one of Frank Capra’s best films. I can still remember reading his autobiography, The Name Above the Title, in junior high. Capra said never make your best film the same year some other guy makes Gone with the Wind. Like Dave above, Mr. Smith has a lot to say but never forgets to be entertaining. Country Bumpkin Jefferson Smith (Jimmy Stewart) is tapped by his Governor (Guy Kibbee) to fill a vacant Senate seat white the State’s political machine boss, Jim Taylor (Edward Arnold) decides who he really wants to run. Smith serves beside Senator Joseph Paine (Claude Rains), the “white knight” of the Senate, who was good friends with Jeff’s late father and harbors a dark secret. This film has it all: screwball comedy (Jeff is a fish out of water in Washington), tough-as-nails satire (The newspaper writers seem to have been created by Preston Sturges) and sweet romantic comedy (Has Jean Arthur ever been more appealing?). It still floors me that the film was rejected and criticized by the real United States Senate, which loudly argued that the events in the film COULD NEVER REALLY HAPPEN. Corruption in Washington? Be still my beating heart. Avoid the remake. 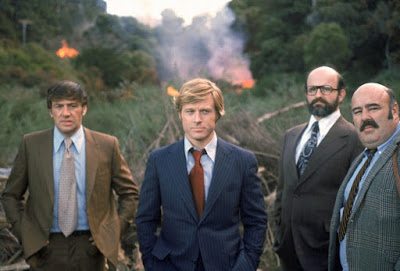 This would be the first film in what I call director Michael Ritchie’s “American Trilogy:” The Candidate, Smile, and The Bad News Bears, made one right after the other between 1972 and 1976, our Bicentennial. With subjects as diverse as political campaigns, small-town beauty pageants, and little league baseball, Ritchie tells us everything we could ever want to know about these United States. Gee, do you think it’s just a crazy coincidence that all three films revolve around competitions?

Lawyer Bill McKay (Robert Redford) is tapped by party operative Marvin Lucas (Peter Boyle) to run for the Senate. The catch? There’s no way he can win. Incumbent Crocker Jarman (Don Porter, Gidget’s Dad!) is popular, and the Democrats just want to field a candidate. McKay will spend a few weeks pressing the flesh and getting his ideas into the headlines, and then he can go back to private life. But McKay proves crazy popular, and the fact that his father John McKay (Melvyn Douglas) is a career politician with name recognition from way back doesn’t hurt. As the campaign wages, young McKay surges in the polls. It looks like he actually has a chance to win. This film seems very knowing as it takes us through the ins and outs of what seems to be a real political campaign; the film has a documentary look that makes it seem real. Apparently, some of the scenes in the film were improvised. This trenchant satire was very hard to see for far too long; it now shows up on TCM fairly regularly. The Candidate has never been released on Blu-ray disc. C’mon, Warner Archive! Get off your ass!

If the above list doesn’t provide enough grist for your political mill today, try these other, terrific political films that I have ALREADY WRITTEN ABOUT. Happy Election Day, America!

All the President’s Men

Dr. Strangelove, OR: How I Learned to Stop Worrying and Love the Bomb
Posted by Patrick Bromley at 5:00 AM

Email ThisBlogThis!Share to TwitterShare to FacebookShare to Pinterest
Labels: dave, movies is good, mr. smith goes to washington, political movies, seven days in may, the candidate, wag the dog