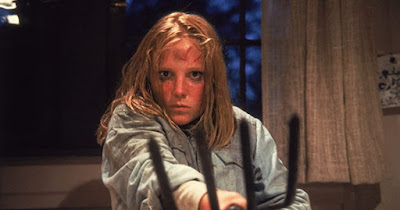 Celebrate 40 years of these horror movies with a day-and-night marathon!

1981 was an incredible year for horror movies. Slashers, monster movies, weird European shit -- '81 had it all, ushering in for me what was the Golden Age of horror movies (probably because it's what I grew up on, I'm self-aware enough to recognize). Programming a 24-hour marathon of strictly horror films from 1981 wasn't hard. What was hard was having to leave some out.

10 am - An American Werewolf in London (dir. John Landis) 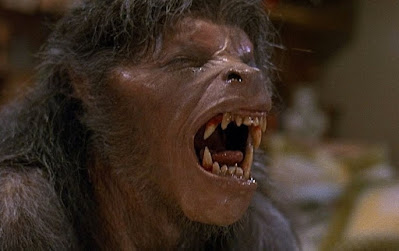 Kick things off with a classic. I normally like to start these marathons with an older title, but that's hard to do when they all come from the same year. Landis' werewolf staple -- one of the three best wolfman movies ever made -- comes imbued with the spirit of old Universal monster movies, only updated for the '80s. It's funny and it's sad and it kicks all kinds of ass and is perfect to launch an incredible 24 hours of horror movies.
11:30 am - Halloween II (dir. Rick Rosenthal) 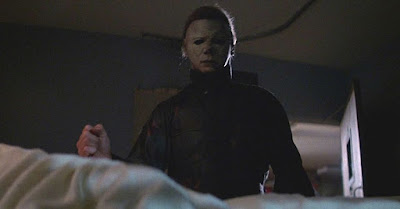 Putting this second because a) we need to acknowledge the importance of the sequel in the 1981 horror landscape and b) I just really like it, a fact I've struggled with for years (I had an on-again, off-again relationship with it for a long time). On any given day I'm more inclined to pull this one off the shelf and watch it than the original, which says nothing about the quality of the film and is just about my bad taste. Jamie Lee Curtis' sidelining and inexcusable wig are the only big strikes against Halloween II. Well, that and the introduction of the whole "brother" thing.
1 pm - Ghostkeeper (dir. James Makichuk) 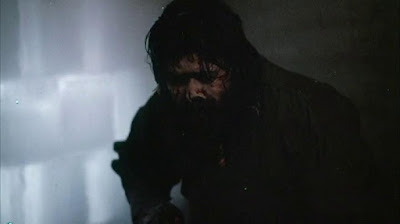 Time to slow things down. Like, waaaay down. I'm a sucker for this Canadian ghost story, not so much for what happens (which admittedly is almost nothing) but for its snowy lodge atmosphere. I want to be sure to include a few lesser-known titles in this marathon, a category into which I think Ghostkeeper pretty safely falls. Some of our audience might have the patience for this one, which is why I'm programming it early when we still have the energy for its deliberate pace.
2:30 - Dead and Buried (dir. Gary Sherman) 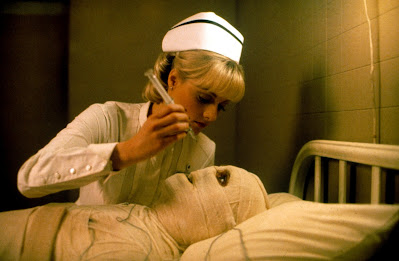 The nice thing about all of these movies being like 90 minutes or so is that you can pack so many more into the marathon, like this gem from Gary Sherman that might not have otherwise made it into the lineup. A recent airing on The Last Drive-In seems to have brought the film to a whole new audience who had never seen it before, which is great because it's really special and excellent. I don't want to spoil anything here in case you haven't seen it, but it's great seaside horror with gross effects and some major surprises.
4 pm - The Pit (dir. Lew Lehman) 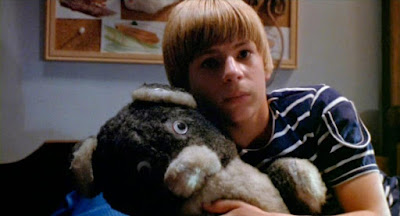 From crazy to crazier, the one-two punch of Dead & Buried and the Canadian export The Pit is a reminder that 1981 horror could be completely bonkers. The film, based on the novel Teddy, stars Sammy Snyders as a troubled young man whose only friend is a teddy bear and who finds a pit full of monsters in the forest. There's all kind of uncomfortable sexuality in the movie, which seems to have been written for an actor younger than Synders. It's fucking crazy and I love it.
5:45 pm - Friday the 13th Part 2 (dir. Steve Miner) 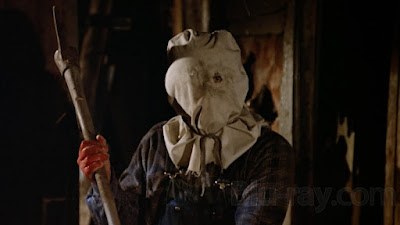 Another important sequel released in 1981. This one's different from Halloween II because unlike that movie, Friday the 13th Part 2 is actually superior to the film the precedes it. It introduces Jason Voorhees as the killer and gives us Amy Steel as one of the absolute best Final Girls to ever get in the game. It's a better movie than the original Friday in pretty much every way, because Steve Miner is a better director than Sean Cunningham and the script (by Ron Kurz) is lean and tense. Many people name this as their favorite in the series and I can't say they're wrong.
7:15 pm - The Howling (dir. Joe Dante) 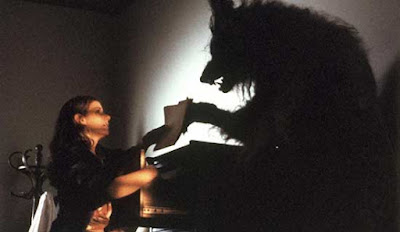 Another of the three or four best werewolf movies ever made was released the same year as American Werewolf. Joe Dante's film is less overtly comic but more playful overall, though the humor is slyer thanks to the smart screenplay by John Sayles. The effects by Rob Bottin can't compare to Rick Baker's Oscar-inventing work in AAWiL, but they're still pretty cool and were groundbreaking for a matter of months. The bipedal werewolves in this movie are some of my favorites ever committed to film. The primetime slot is usually reserved for a classic, and The Howling fits that bill.
9 pm - Night School (dir. Ken Hughes)

I didn't see Ken Hughes' giallo-influenced slasher Night School until the Warner Archive Blu-ray was released a few years ago, and I'm bummed it hasn't been part of my life for longer. Rachel Ward makes her movie debut as an exchange student at a Boston college where the co-eds are being decapitated by a mysterious killer. There's a good sense of place in the film, some good kills, and a solid giallo mystery as to the killer's identity. Lots of good stuff. 1981 was such a good year for slashers, wasn't it?
10:30 pm - The Evil Dead (dir. Sam Raimi) 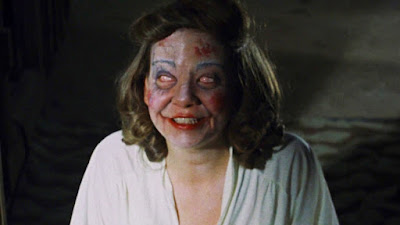 As we get into the late-night section of our marathon, it makes sense to program this indie horror masterpiece for its zany energy and can-do spirit. I love all the Evil Dead movies, but this one is my favorite if pressed.

Midnight - The Beyond (dir. Lucio Fulci) 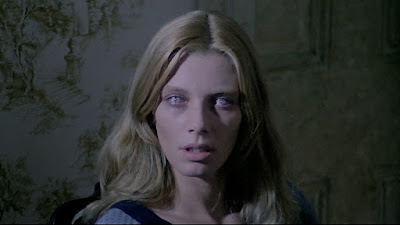 The Italian horror slot is occupied by arguably my favorite Italian horror movie of all time, released in 1981 by the great Lucio Fulci, who also had The Black Cat and, in some parts of the world, House by the Cemetery out the same year! The Beyond is a masterpiece of horror, a nightmare from which it is impossible to wake. It contains some of my favorite imagery and one of my favorite Fabio Frizzi scores. In just about any other 24-hour lineup, it would be too obvious a choice for the Italian horror slot. In this 1981 marathon, though, it would be impossible not to program it.
1:30 am - Graduation Day (dir. Herb Freed) 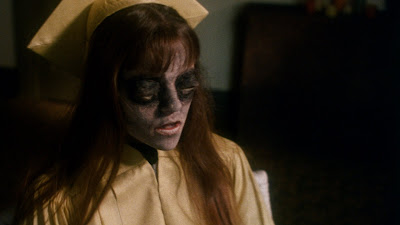 Just for fun, let's take a break from Italian horror (we'll get back to it) for this by-the-numbers slasher starring Human Cigarette Christopher George (copyright Matt Sollenberger) as a track team coach who loses his star to a freak accident and then begins losing the rest of his team to a series of grisly murders. There's almost nothing remarkable about Graduation Day, which is why I like it: the movie is a perfect example of the kinds of generic slashers that were being cranked out in the early 1980s. Overnight is the perfect time to watch it.
3:15 am - Absurd (dir. Joe D'Amato) 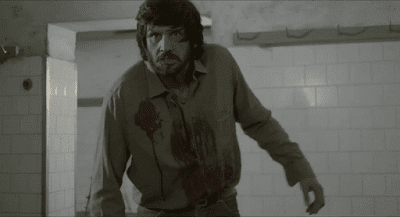 Let's get back to the Italian weirdness! Joe D'Amato's Absurd is a perfect synthesis of Italian horror and an '80s slasher, seeing as it's a blatant ripoff of Halloween with George "Big Ape" Eastman in the Michael Myers role. It's not great because I have yet to find the Joe D'Amato movie that is, but it's so perfectly in keeping with what was happening in horror in 1981 that I couldn't help but program it.
5 am - Just Before Dawn (dir. Jeff Lieberman) 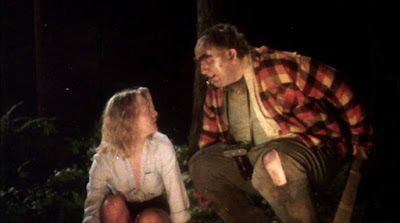 I'm completely unoriginal, so I'm programming Jeff Lieberman's brilliant slasher in the exact spot it belongs as the sun comes up. This one took me a few viewings to really appreciate, but now I count it among my favorite entries in my favorite subgenre of horror. It has a great Final Girl, some surprising twists, and beautiful scenery/great backwoods locations. How I grew up knowing nothing about this movie will forever confound me.
6:30 am - My Bloody Valentine (dir. George Michalka) 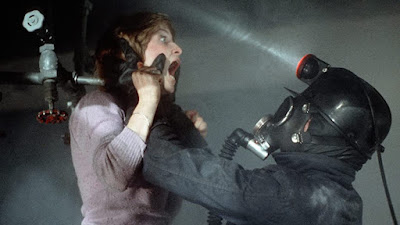 Speaking of my favorite subgenre of horror! It's amazing that the slasher was still so much in its infancy in 1981, because between Friday the 13th Part 2, Night School, Just Before Dawn, and My Bloody Valentine (plus another movie coming up soon in the marathon), it's one of the best years for the slasher ever. I once heard director George Michalka describe this as a "working class" slasher movie, and he's absolutely on to something -- it (and some brutal kills, particularly in the film's uncut form available on Scream Factory's Blu-ray) is what makes My Bloody Valentine so special. I recently moderated a panel with actor Peter Cowper, who plays the miner/Harry Warden in the movie, and he was one of the nicest people I've ever met. That alone gives me reason to revisit this classic of the genre.
8 am - The Monster Club (dir. Roy Ward Baker) 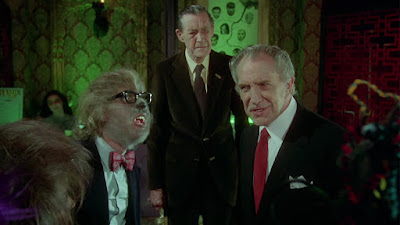 This is probably the movie on the list with which I'm least familiar, but I want to program it as an example of the wide variety of horror films available to audiences in 1981. I love the cast, obviously, and Jonathan James (my editor-in-chief at DailyDead.com) watches this movie basically every day, so I need to see what he sees in it. Seems like the right movie to watch during breakfast.
10 am - The Funhouse (dir. Tobe Hooper) 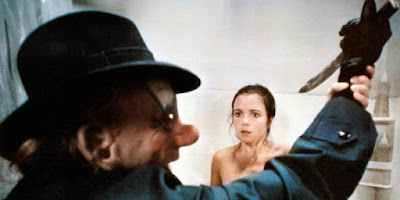 Let's close things out with my favorite slasher movie, my favorite movie from my favorite director, and my favorite horror movie of 1981. The Funhouse is a movie that only gets better with age, and I'm proud to have been a champion of a film that more and more people have discovered over the course of the last decade or so. I said this when I programmed the movie on an episode of Pure Cinema once, but I love the idea of stumbling out into the light after 24 hours in a movie theater because it perfectly mirrors the ending of The Funhouse.
Happy #ScaryMovieMonth, everyone!
Posted by Patrick Bromley at 5:00 AM

Email ThisBlogThis!Share to TwitterShare to FacebookShare to Pinterest
Labels: 1981 horror movies, 24 hours of movies, 80s horror, american werewolf in london, evil dead, just before dawn, the beyond, the funhouse, the howling