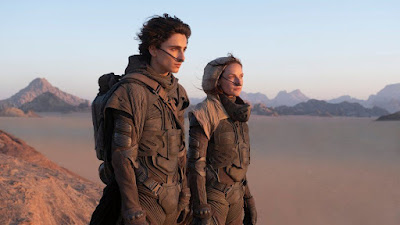 “We don’t get a lot of things to really care about.”

Regrets for missing include, but are not exclusive to, these movies below. I encourage you to check them out, as I intend to: 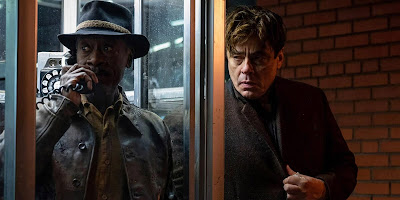 We’ve reached a point where we seem to take a director as talented as Steven Soderbergh for granted because he’s made so much content of consistent high quality, basically a movie or a TV show every single year of his illustrious career. As with most crime thrillers, the less is known the better, but the wear and tear on the faces of his slightly older cast (Don Cheadle, Brendan Fraser, Benicio del Toro, David Harbour, Amy Seimetz) work beautifully in a story about desperate people, worn out by life, making increasingly desperate moves to get away with the perfect crime.

I have some substantial pop culture anxiety about Marvel. On one hand, I’m happy that it’s elevating stories of people of color, told by those people (see: Black Panther and Shang-Chi). On the other hand, I’m suspicious about various cultures possibly being treated as checkboxes as a billion-dollar corporation barrels its way to multi-versal domination (here’s your Indian superhero, and your Muslim one, and your gay one, etc.). No Way Home doesn’t solve any of those concerns; it’s not trying to, and it doesn’t need to. How could one movie do that, anyway? I could set these concerns aside for a minute because this movie was doing the work that all the best storytelling does, which is to take us on a journey with a character that we care about. Maybe because Marvel had to split the responsibility with Sony, or because Spider-man is just the most relatable hero to so many people on so many levels, or the normal Marvel Third Act IssuesTM didn’t loom so large, but I loved how much genuine emotion and love and care was put into making this, and that’s just more of what I want from stories, even if it’s from a huge corporation. The concerns of compartmentalizing or creating intellectual capital just for future profit still remain, but this felt like there was a little responsibility to go along with all of that corporate power. 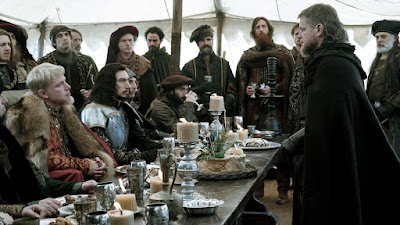 The Dad MovieTM has slowly been creeping onto my end of the year lists, and what better champion to ride under that banner than the movie that was “ruined” by millennials, according to Ridley Scott? Fortunately, my heart doesn’t need to see the box office receipts to love something, especially when there is quite so much to love. Scott, well into his 80s, is still doing what he does best, which is to pit irascible, flawed men against each other in epic and grand scale (and by epic scale, look at that table spread), with a courageous woman stuck in the middle to suffer from their inadequacy or clean up their mess (or both). Jodie Comer and Adam Driver are incredible and shade their performances in interesting ways. Ben Affleck and Matt Damon are back in a movie together! It’s not just a sword and shield adventure, and even though it doesn’t have a lot of answers, the questions it brings up stayed with me for a long time after. Young, old, dad, non-dad: there’s plenty here for everyone. 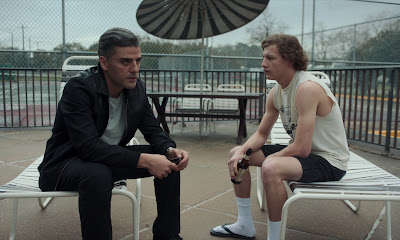 By now, Paul Schrader has his doctorate in studies of loners in need of redemption. Oscar Isaac plays a military veteran who plays blackjack and poker because he believes these small pleasures are the only things he deserves after a sketchy past that took too much away from other people. He continues to live this drab existence, moving anonymously from one casino to another, even dressed completely in monotone grey, until his past, in the form of a fellow compatriot’s son, played by Tye Sheridan, offers him a pathway out of the purgatory he’s assigned to himself. As in much of Schrader’s work, it’s not whether the redemption is actually reached, but whether one has the fortitude to take a chance at it, regardless of what the hand is. 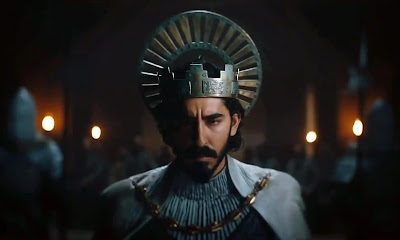 Me: Who wants to learn about Anglo Saxon stuff?

Ok, the term wyrd in Old English has to do with destiny or fate, and one of its offshoots of meaning over time develops into the modern weird, with its connotations of the strange and supernatural. This intertwining of one’s destiny with what is strange is where David Lowery’s film truly excels; one can see it in the otherworldly mood, the languid pace, and the attention to detail that takes the audience to a story is rooted in actual literary history but feels so unfamiliar and distant from our current day. And that was great, because I don’t particularly need fantasy movies to be action movies, like what the Lord of the Rings movies almost became, and what is only remembered about The Hobbit and Game of Thrones. It’s important for fantasy stories to live in that space of mystery, myth, and legend, because we forget sometimes that not everything can be explained. 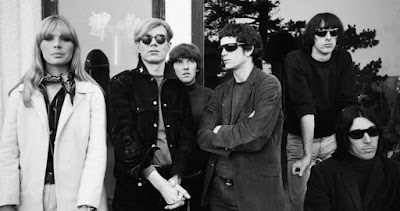 Film critic Amy Taubin, who features in the documentary, once noted that “Warhol, avant-garde film, avant-garde music; it was all about extended time,” and even though the Velvets were only around for a little bit, their influence has extended well past their own shelf life or commercial success into all kinds of modern rock music. I don’t know how well this will play with fans who are unfamiliar with the band, but Todd Haynes’s documentary about one of the seminal rock bands in American history grabs the attention with its peek into the artistic tumult of New York in the 1960s. It captures the frantic, bursting energy of all these particular creative people of the time, with a debt of gratitude in style to Andy Warhol, who backed Lou Reed, John Cale, Sterling Morrison, and Maureen Tucker as they rose to prominence, just four college kids who wanted to write songs that were literature. 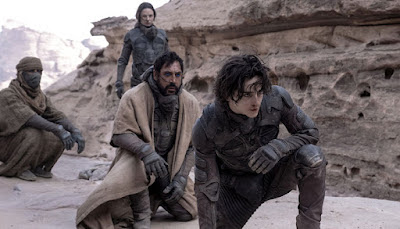 “Impossible to adapt to screen” is a well-worn cliché by now, but Frank Herbert’s novel has the track record to back it up, like David Lynch’s attempt and Alejandro Jodorowsky’s. What makes Denis Villeneuve’s version remarkable is not the normal stuff we’ve come to expect out of his movies, like a striking visual style, or impeccable casting, or an uneasy ambience. It’s that Villeneuve has a sense of the grotesque and the macabre, which we sometimes forget is necessary in science fiction. The sandworms and the thopters and the personal shields are great, but I can’t help but notice the monstrous and the bizarre here, like the Baron in a mudbath, or the Voice, or the rituals of a warrior culture. 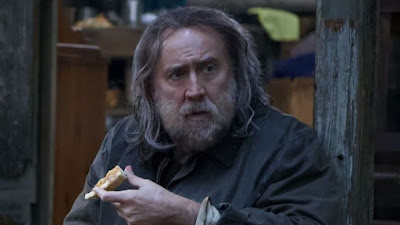 One of the best parts of movies as a hobby is when your circle brings to you something that you totally missed. The good people of FTM have been blowing the conch for this one all year, and I’m grateful to have seen this. To call Nicolas Cage’s performance as restrained would be assuming that he’s constantly looking to explode; he’s so purposefully controlled and quiet, and this leads us to the great beauty of this story. Cage with a pig out in the woods might feel like an outlandish place to start, but the movie takes us from the outlandish into the incredible real and pragmatic places that people will go to deal with great hardship. 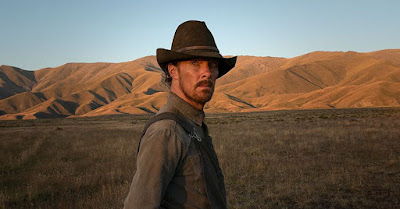 Apparently the titular dog’s power has to do with expectation and surprise. I never could have pictured Benedict Cumberbatch as a rancher, but he’s completely believable as a hard-nosed, toxic bully. So many great performances all the way around in Jane Campion’s film, including New Zealand acting as turn-of-the-century Montana. There are twists and turns, doubling and mirroring, hiding and revealing, leading to the best ending of a movie this year. The western, and its commentary on masculinity, isn’t dead; long may it reign. 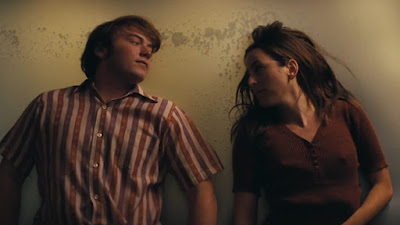 I have an iffy personal track record with Paul Thomas Anderson, one of America’s Greatest Living DirectorsTM. I always respect his movies, but I don’t love them in the way I love, say, Tarantino, or Spielberg, or Scorsese, etc. It’s the restaurant that everybody likes except you, or the teacher that everybody raves about but you find confusing. Maybe I had to resign myself to not being on the same frequency as him, and that’s all.

All of that being true, I totally fell in love with this movie. It was so great to hang out with Alana and Gary as they’re running around Southern California in the 1970s, young and curious, way too sure about some things and unsure about others. Alana Haim and Cooper Hoffman are names that I need to type here in this space because people need to know their names, and Anderson should get credit for getting these performances out of two debutantes. There’s real warmth that I never felt as much in other Anderson fare, maybe necessitated by the story’s focus on young people and their fervent but still tender convictions. It’s beautiful and bighearted and generous, and there’s room on the truck for everyone if you want to help with the waterbeds or pinball machines.
Posted by Patrick Bromley at 12:00 PM