Pre-game for F This Movie Fest with these double features from 1996!

Patrick: This probably isn’t my finest hour, but I’ve wanted to revisit James Mangold’s first movie for a number of years and this seems like a good chance to do it. I remember really liking it in theaters (I for sure saw it because Liv Tyler is in it, but bonus Evan Dando!) but I don’t think I’ve seen it since. I actually think it would pair well with Hunchback, another movie I haven’t seen since theaters in 1996.

Adam: I dig it. I’m not sure I’ve seen The Hunchback of Notre Dame the whole way through. I plan on rectifying that before F This Movie Fest, which is why I wanted your help pairing it with another ‘96 movie. Heavy is one of my unseen Mangolds, so this would be a solid double feature for me. I had to Google Evan Dando. I’m a fraud.

Adam: Jeez…there were a lot of new filmmakers bursting on the scene with romantic comedies in 1996. I’ve never seen either If Lucy Fell or Walking and Talking. Are they good? 14-year-old me thought If Lucy Fell seemed unwatchable because I was a snob. Eric Shaeffer kind of looks like Experiment 37 if Experiment 38 was Ron Eldard.

Patrick: I like Walking and Talking, because Nicole Holofcener. I don’t remember liking If Lucy Fell, because Eric Shaeffer. I do want to revisit it, though, because it was his big studio debut. His She’s the One, if you will, which also came out in ‘96. 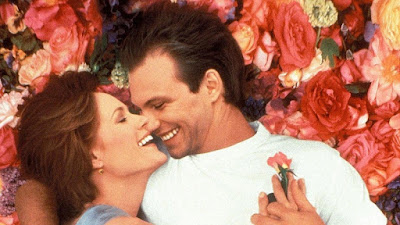 Patrick: I’ve never seen Courage Under Fire, but wanted to do this theme because I couldn’t pass up an opportunity to program your beloved Bed of Roses. I hope these two movies play together.

Adam: Courage Under Fire is good but I haven’t seen it in a few years. I remember Bronson Pinchot said Denzel Washington was a jerk when they made the movie, which is a bummer because he’s terrific in it. Anyways, it was interesting to see Meg Ryan playing against type as a soldier. Thank you for programming Bed of Roses. It plays with anything.

Adam: I sort of took the Friends cast’s film career for granted back in the day, but looking back at the list there’s a lot of movies they either starred or co-starred in that I enjoy. I thought it would be cool to showcase just the female leads for this double since She’s the One and Scream are both pretty kickass.

Patrick: Yeah, they did some interesting stuff in early days of trying to pivot to movies, maybe because they were taking supporting roles and not trying to cash in with star vehicles, as Jennifer Aniston would a year later with Picture Perfect. This would be a good double. 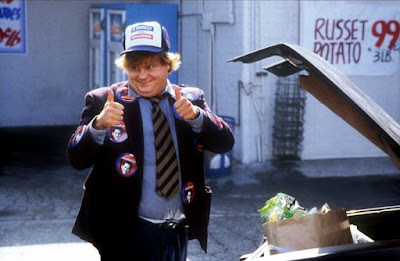 Patrick: Ok, that theme isn’t totally fair. I don’t think Bulletproof or Black Sheep is totally shitty, though I wouldn’t call either one “good” either. I could watch either one pretty much any time, so that counts for something. I can’t say the same for the trailer block, which is what really gives the theme its name.

Adam: Boy do I love shitty buddy comedies. I genuinely like Bulletproof and Black Sheep has its moments too. This is a great pairing especially because it’s pretty short! I remember making my Mom take me to see Celtic Pride in theaters and during the movie I thought “This isn’t fair to her.”

Adam: This is pretty random, but I couldn’t come up with something to pair with Dead Man right away and this theme came to mind first. I like Dead Man (from what I remember) and need to see The English Patient once and for all so there’s some appeal to this double feature even if it’s not the one I would watch first from our list.

Patrick: I like it, even if you’re going to make me watch The English Patient again. Our friendship will survive. 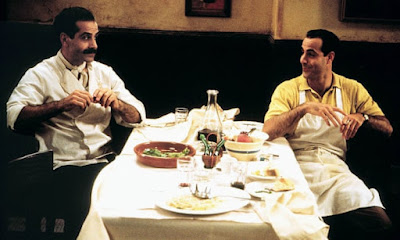 Patrick: I have no excuse. I’ve had 25 years to see these movies and I just haven’t. I went with Sling Blade as the second feature because it seems a little less heavy and dry than at least two of the movies in the trailer block, but I could be totally wrong about that.

Adam: Don’t feel bad, I’ve never seen Sling Blade either, but I think it’s supposed to be heavy??? I avoided it because he’s all “Mmmhmm taters.” Big Night is really good. I’m excited for you to see it.

Adam: I couldn’t resist the pun, which is appropriate for a double feature that includes a Tales from the Crypt movie. I like Bordello of Blood more than The Frighteners because I’m a crazy person. That movie gives me a headache even though I love the idea of it and the poster’s pretty cool. It needed Dennis Miller is what I’m trying to say.

Patrick: What a double this would be! If we do another podcast where we pick real FNDF to talk about, I might pick this one. I’m definitely Team Frighteners, but I think Bordello of Blood would play well in this setting. Plus, you get the added bonus of Frighteners originally being intended as a Tales from the Crypt movie, so the double feature has even more to connect it! 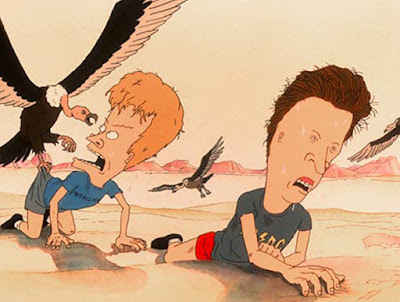 Patrick: Was 1996 the peak of turning TV shows into movies? Boy there were a lot of them that year.

Adam: This would be a great double feature to start at midnight. And yes, my goodness, that’s a lot of film adaptations of TV shows in one year. Sgt. Bilko sucks so much. I remember seeing that in theaters and being like “Poor man’s Down Periscope much?”

Adam: Randy Edelman wrote the score to Dragon: The Bruce Lee Story, which then went on to be in many trailers for years afterwards. His score for Dragonheart is incredible too and I really loved that movie (except for the part that it’s directed by Rob Cohen) when I revisited it a while back. I’ve been meaning to re-watch The Quest for about two decades. This should be a fun double feature.

Patrick: I’ve never seen The Quest! That was going to be my ‘96 Shelf Life movie with Erika until I discovered we don’t own it. I do love the Dragonheart score, though (it was the whole reason I programmed it in the first place), so pairing these two movies by composer is an inspired choice.
Posted by Patrick Bromley at 5:00 AM