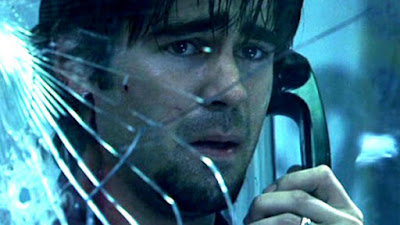 Winner for “Best Director” (Joel Schumacher) at the AARP Movies for Grownups Awards.

• Best Scene/Moment: The scene towards the end where Colin Farrell’s character confesses to his wife (played by Radha Mitchell) about what a creep and phony he is. Farrell is tremendous throughout Phone Booth (it’s a great actor’s showcase), but this moment was one that convinced me in 2003 that Colin Farrell was worth all the hype that surrounded him.

• Best Song: There aren’t many songs to choose from, so I’ll go with one that plays over the end credits - “Six Days” by DJ Shadow. This song also appeared in The Fast and the Furious: Tokyo Drift.

• Best Merch: A “Vintage 2003 Phone Booth Movie Screening Ticket” for $6.00. The ticket allowed you and a guest to a special screening of Phone Booth on the night before its wide release at the Cinemark Tinseltown in Jacksonville, Florida. This would make for a nice bookmark!

• Director Check: Phone Booth was directed by one of “my guy” directors: the late, great Joel Schumacher. Schumacher started as a production designer and screenwriter before making his feature directorial debut with 1981’s The Incredible Shrinking Woman. He worked consistently throughout the 1980s, 1990s, and 2000s directing films like St. Elmo’s Fire, The Lost Boys, Flatliners, Falling Down, 8mm, and The Phantom of the Opera (2004), where he brought his master craftsmanship and stylization. Schumacher found niches in his filmography collaborating on John Grisham adaptations such as The Client and A Time to Kill and two Batman films, the wonderful Batman Forever and overly maligned Batman & Robin. He also was partially responsible for launching the career of Colin Farrell with 2000’s underseen and terrific Tigerland and Phone Booth. Schumacher’s last film was 2011’s Trespass, which reunited him with actors Nicolas Cage and Nicole Kidman. Joel Schumacher sadly passed away in 2020. He left behind a diverse and very entertaining filmography.

• Year 2003 Movies to Trailer Before It: Daredevil, Intermission, S.W.A.T. 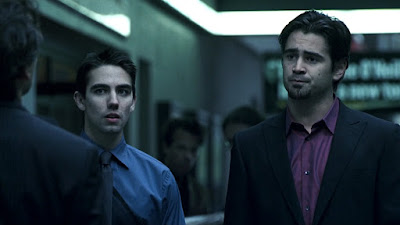 • Mall Movie? Yep, it’s an under 90-minute programmer perfect for the mall theater.

• Scene Stealer: Forest Whitaker, who can always take a stock character and make him interesting.

• I Miss: Joel Schumacher and Larry Cohen, who also passed away recently.

• I Don’t Miss: This era (era) of grimy photography and score. Phone Booth looks and sounds like a feature length version of this PSA. 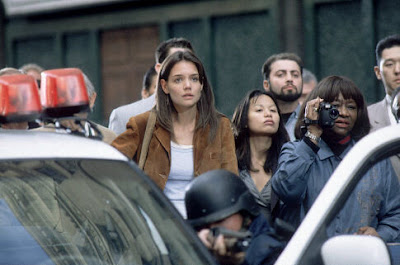 • What I Thought in 2003: I can’t remember if I saw Phone Booth for the first time in theaters or on DVD but really enjoyed it back in 2003. It’s short, tense and filled with great performances.

• What I Think in 2023: I miss movies like Phone Booth playing in theaters. First and foremost, this is one of Colin Farrell’s best performances; he’s equally skilled at playing the sleazy and sympathetic aspects of his character which goes a long way in making the audience care about him and the events that follow. Phone Booth is also one of Joel Schumacher’s best movies. It’s significantly scaled down from his usual productions but he’s terrific at moving the action forward with momentum and turning what could have felt stage bound into a thrilling cinematic experience. I also love that the movie is full of supporting turns from great actors such as Kiefer Sutherland, Katie Holmes, Radha Mitchell, Paula Jai Parker, Richard T. Jones, and Ben Foster.
Posted by Patrick Bromley at 12:00 PM