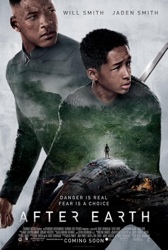 You should see After Earth and make your mind up for yourself. Don’t listen to the critics. It’s nowhere near as bad as they are saying.

After Earth is a flawed and dopey movie, but also an interesting, entertaining time-waster. I went into the movie expecting an absolute train wreck and After Earth is not that. In fact, it’s co-writer/director M. Night Shyamalan’s best movie since Signs. Good for Shyamalan -- it’s a step back to respectability. As for the Smiths, After Earth is no worse than Men in Black 3 and another step in the right direction for Jaden. 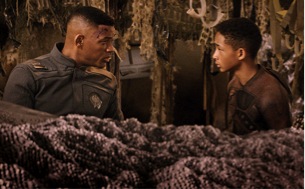 The plot: The movie is set 1,000 years after humans left Earth due to a pesky apocalypse. Mankind took up shop on Nova Prime, which is like a mixture of the landscapes you sleep through on road trips and downtown Star Wars Episode II: Attack of the Clones. Will Smith plays Cypher Raige, a legendary soldier/warrior known as a Ranger (there’s a Ranger team, you see) who’s the shit because he can “ghost,” which means that he has NO FEAR thus not releasing the scent that monsters known as Ursa use to detect humans to better kill them. Cypher’s son is Kitai (Jaden Smith), a brash young punk failing to live up to his father’s footsteps. Kitai is denied acceptance as a full-blown Ranger because, although athletic, he hasn’t mastered the whole "fear" thing yet. Father and son are not getting along (a past tragedy, you’ll see in flashbacks), so Mama Raige is all "You should take Kitai on your next mission, Cypher." Great idea, Mom! So, Kitai goes with Cypher on the mission (in tow are a bunch of other Rangers and a locked up Ursa, there for "ghost" training). Oh no, an asteroid field! The ship crash lands and Kitai and Cypher are stranded on Earth. Everyone dies except Kitai and Cypher. The Ursa is missing. Cypher is critically injured, so he tasks Kitai to go on a perilous journey through Earth to retrieve the beacon (many kilometers away in another part of the crashed ship) that can alert the help they need to bring them home. A lot of daddy issues are worked out as Cypher coaches Kitai along the way. Will Kitai master his fear? Is the Ursa still alive? Will they get back to Nova Prime?

There are essentially two performances in the movie: Jaden in the lead and Will as support. Will Smith is good here playing against type. I’ve heard that he turns down his mega-watt charm, but those people seem to be missing the point -- he’s playing a character who is kind of a dick. He doesn’t care about emotions; he’s a military task-master who is all about getting a job done. Jaden Smith gets a bad rap overall. While Will is usually trying to get audiences to always like him, that’s not Jaden Smith’s intention at all. As a performer, he’s brash just like Will, but also much angrier and emotional (but not in a fake way). I honestly think he could grow up to be an interesting actor. In After Earth, you get the brattiness and anger but also a vulnerability that makes his character sympathetic. He needs his Dad. Art imitating life? I don’t really give a shit. It works. The performance only goes a little off the rails when the script forces Kitai to show no fear and become an ultimate warrior, robbing Jaden of his most interesting trait: volatility. Plus he seems pretty athletic, like Tom Cruise in Mission: Impossible movies. 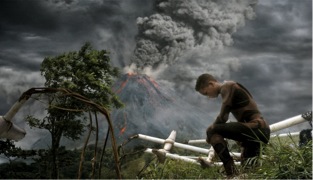 I liked that the movie isn't bombastic, especially for a summer science fiction movie. Even though it has a huge budget, After Earth feels small. It’s calm and more deliberately paced, which is a relief after Iron Man 3, The Great Gatsby, Star Trek Into Darkness, Fast & Furious 6 (although I liked the latter two). As you watch After Earth, it feels like the Diet Coke version of Jurassic Park III. The cinematography by Peter Suschitzky (A History of Violence, Eastern Promises, The Empire Strikes Back) is really vivid and gorgeous. Even if After Earth were a bad movie, I would almost recommend seeing it on a big screen just to take in the look of it. I also liked the tech of the movie. The special effects are wonky overall (all of the animals and monsters look inorganic and weightless), but the CGI used for the trackers, mapping and diagnostics were all really neat-o! Isn’t that part of the reason we like sci-fi? For the neat-o?

But the movie has a fuck-ton of problems. The storytelling is really bad. Just read the plot paragraph I wrote and try not to smirk. It’s impossible to do. It’s very stupid: the names, the random Jamaican-American accents where no one says "it’s" when you can say "it is," the leaden narration which starts the movie and immediately goes away after the first few minutes. There are also big jumps from points A to B; Jaden is supposed to be fearful but is OK jumping off cliffs like he’s Jake Sully from Avatar (the movie is very derivative, ripping from Avatar to Planet of the Apes to Cloverfield) and he basically learns how to "ghost" by taking a deep breath and closing his eyes. Also, why did the animals on Earth "evolve to kill humans" when there are no humans left on Earth? And why does Cypher leave a message for his wife telling her he (at one point) lost communication with Kitai but never says "Hey by the way, can you track this message somehow and send help?" The theme of the movie is "Danger is real. Fear is a choice." I call bullshit. And if you never feel fear, how do you feel excitement or adrenaline or bravery? Yeesh.

I still kind of like the movie. I don’t want to harp on movie critics, but they can be assholes. It’s fine if a critic legitimately doesn’t like After Earth, but it’s not so bad it deserves a 12% approval on Rotten Tomatoes (just like Hansel and Gretel: Witch Hunters is much better than the 14% it got). Critics sometimes go into hive mentality where they won’t recommend a movie that’s good at being what it’s about because he or she can’t possibly endorse a particular type of movie. This was an M. Night Shyamalan movie starring the Smiths, all of whom are ego-maniacs (as seen in many interviews). It was doomed from the outset. I am willing to give credit where it is due and I wish more critics would do the same.

After Earth is a prime example of "are you with a movie or are you not with a movie?" I recognize the movie has tons of flaws but it didn’t matter to me. I had a decent time and I’m glad I saw it. My expectations going in were very low and I got a perfectly watchable diversion. I’m going to call the movie a pleasant surprise and leave it at that.

Note: It’s kind of curious I didn’t mention the writing and directing of M. Night Shyamalan. Honestly, I almost forgot. The reason is because it’s so non-descript. Good for him. Be invisible (#ghosting) first and get your authorial voice back. It’s just competent genre direction -- no more, no less.
Posted by Patrick Bromley at 12:08 PM