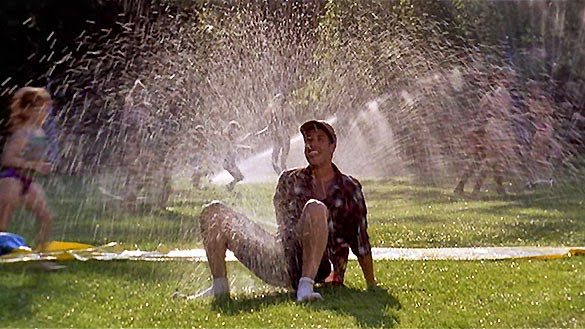 In the movies, a dumb character lights a match or blows some cigarette smoke or pulls an alarm, and EVERY fire sprinkler in the building goes off. But here's the thing: sprinklers are individually activated by temperatures in excess of 155 F; only the sprinkler closest to the fire will discharge (eww), leaving the rest of the building completely dry (note: there are a FEW instances in which a deluge system will activate every sprinkler head in an especially hazardous location, but c'mon -- those are rare). Frankly, I'm sick of this inaccurate, lazy and dangerous (yes, dangerous) screenwriting shortcut. 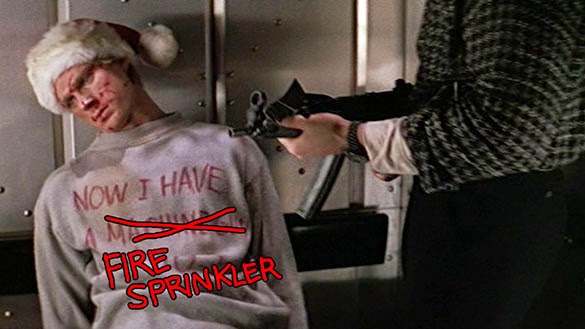 Die Hard does so many things right [everything right?], it even gets fire sprinklers right! I know what you're thinking: "But I remember something about a sprinkler and a fire alarm and explosions!" And you're not wrong ... but it's not quite what you think. John McClane (Bruce Willis), desperate to get the cops to come to Nakatomi Plaza, casually examines the tower's sprinkler system, which INSPIRES him to pull the fire alarm (but the sprinklers themselves never erupt [eww]). This realization is what prompts a response from the authorities, including Sgt. Al Powell (Reginald VelJohnson). The only reason I'm featuring Die Hard on this list (aside from the fact that it's awesome and should probably be on EVERY list) is that it's the earliest example I could find of a movie character even REFERENCING this fire safety technology (relatively novel in the '80s). And, much like Saving Private Ryan's jittery D-Day cam or Pulp Fiction's edgy pop culture dialogue, lesser films would soon be ripping off (and ruining) this idea for YEARS to come. But not you, Die Hard. We good. 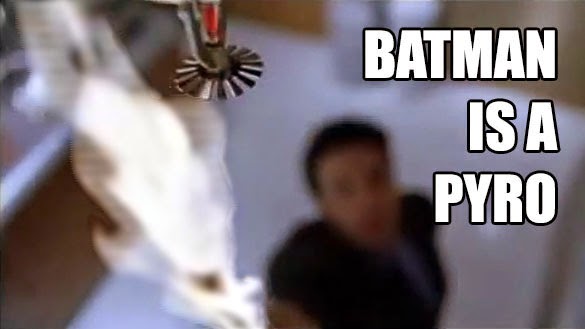 For over seven years, I worked for Underwriters Laboratories Inc. -- the world's largest third-party, independent, nonprofit, public safety testing organization -- and a big part of our business was fire sprinklers [i.e., I KNOW WHAT I'M TALKING ABOUT]. I saw Changing Lanes early in my tenure at UL, and I was aghast (AGHAST!) at this frightful film flaw. Keep in mind, this was back in my early 20s when I was an enthusiastic expert about EVERYTHING (an annoying trait, to be sure). Honestly, I don't remember much about this movie ASIDE from Ben Affleck lighting a piece of paper on fire and holding it under a supply closet sprinkler head, which [erroneously] causes every single sprinkler head to blow (eww) in the office building. But guess what? In the real world, only Affleck would get hosed. And, back in 2002, this really got under my skin.

I love this movie. I love director Brad Bird. And I love Mission: Impossible - Ghost Protocol (2011) (all roads lead back to Ghost Protes). But even I can't reconcile the lazy choice behind having all the residential sprinklers go off in the Parr household. I mean, it doesn't even advance the plot! Bob Parr/Mr. Incredible (Craig T. Nelson) receives a private note that self-destructs, which causes a small explosion, which cases smoke (but no fire), which causes every house sprinkler to burst (eww). Interestingly, when baby Jack-Jack turns into a human fireball, all the sprinklers remain sealed. Perhaps Bob deactivated them? 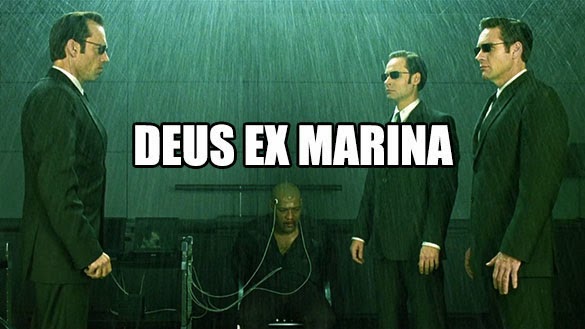 I'll cut The Matrix some slack because a.) it's a kick-ass movie, and b.) the explosion (eww) of every sprinkler in Morpheus' interrogation room creates both a funny beat (drenching the Agents seconds after Neo's firebomb destroys the building's elevator) and a stunning visual (the ensuing helicopter gunfight is remarkable to watch). So, yeah -- in this instance, it's not so much the Wachowski siblings taking shortcuts as it is a premeditated conversation about what would look cool on film.

Garbage movie (aside from what-my-memory-tells-me is an OK road trip sequence[?], but that's probably only because director Cameron Crowe really knows how to pick music). And a garbage gimmick. A prop bird is accidentally set on fire during a cover band's (Ruckus, made up of Paul Schneider and members of My Morning Jacket) rendition of Lynyrd Skynyrd's "Free Bird," triggering the entire sprinkler system to purge (eww). Chaos ensues, the band continues to jam and our two lovebirds giggle because SO RIDICULOUS, right?! Listen, the only time I want to see Kirsten Dunst soaking wet is right before Spider-Man gives her an upside-down kiss, OK? 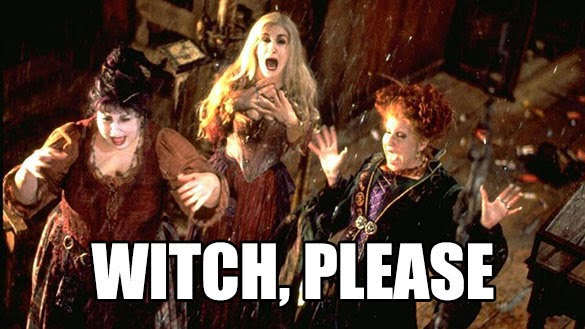 In order to stop the three witches (Bette Midler, Sarah Jessica Parker and Kathy Najimy) from sucking out young Dani's (Thora Birch) life force (it's a thing), Max (Omri Katz) tricks them into thinking he also knows magic. He pulls out a lighter (e.g., the "Burning Rain of Death"), and heats a sprinkler head until the whole room spurts (eww) with water, soaking the sisters. They run outside, duped. Just like audiences for believing this nonsense.

You guys, Martin Riggs (Mel Gibson) is crazy. And Roger Murtaugh (Danny Glover) has had enough of this shit. And every Asian (including Jet Li) is a cartoon character (racist much?). And fire sprinklers spew (eww) whenever you pull a fire alarm. So, you know, complete fiction. Except for the part about Gibson's mental health.

In order to dispatch a gaggle of demons, John Constantine (Keanu Reeves, in a rare Flick Bait twofer!), uses his Zippo to ignite a single sprinkler head, causing the rest of the giant room's sprinklers to gush (eww) forth with [get this] HOLY WATER, thus burning his enemies with God's cleansing sacramental goo, previously blessed by his assistant Chas Kramer (Shia LaBeouf). And by "blessed," I mean The Beef just drops a big ol' cross into a vat of water. You know -- the Christian way. This scene also gets a pass because the effect is kinda cool. This is not an instance of an apathetic writer looking for a way out of a scene (needing to evacuate a building for our hero, for example). Here, the fire sprinkler water is servicing the plot.

Another likeable, fun movie that uses this tired trope as an uninspired means to end a scene. Super unimaginative (I expect more from writer Tina Fey). Principal Ron Duvall (Tim Meadows, fumbling the word "immediately"), attempting to stop a huge fight, cracks open the glass enclosure to a fire alarm with the handle of a bat, which triggers the school hallway's sprinklers to secrete (eww) their contents. The water immediately stops the fracas, because all shallow girls worry about their hair. You know ... adolescent female concerns drawn from real-life scenarios. 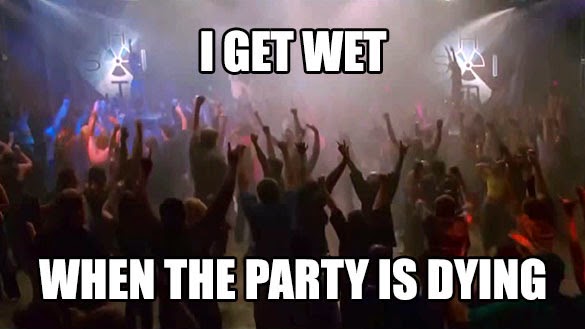 And this movie is neither likeable nor fun. During a big party scene, a dejected villain pulls a fire alarm. The whole gym (scratch that: condemned insane asylum) gets soaked when the entire sprinkler system squirts (eww), but that doesn't stop the fun! The band continues to play, Monica Moreland (Blake Lively [NOT A NAME]) continues to fall for Bartleby Gaines [NOT A NAME] (Justin Long) and one SUPER CLEVER hornball yells, "Wet T-shirt party!" Because why not? HA! Jokes on you, movie heavy Hoyt Ambrose [NOT A NAME] (Travis Van Winkle [NOT A NAME]). Your call box shenanigans can't keep a good rave down.