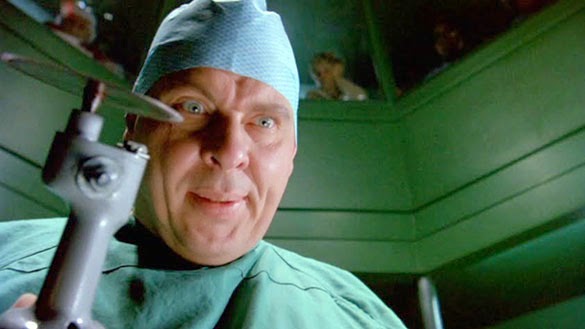 My wife is about a week away from having our second kid. And, like any true, selfish cinephile, I'm using this "sit-and-wait" opportunity to watch movies. But even I know there are some films I should avoid before she goes into labor.

Great movie. Perfect on nearly any other occasion. But if you're squeamish at the thought of an alien creature violently protruding from an otherwise perfectly healthy human being's abdomen, skip it. And if your wife looks anything like John Hurt? Well then, you probably have bigger problems than chestbursters. 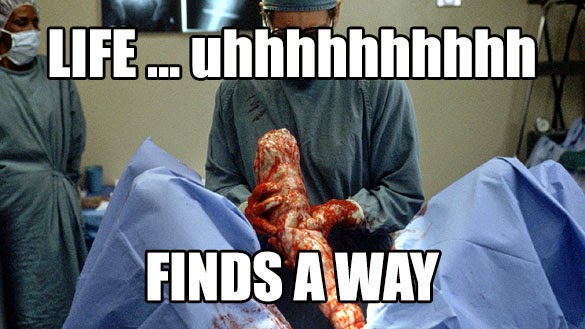 I mean, childbirth (while BEAUTIFUL and PRECIOUS and BLAH-BLAH-BLAH) is gruesome enough. No one wants to actually see the fever dream that David Cronenberg (playing the gynecologist, of all things) whips up for Veronica Quaife (Geena Davis) as she gives birth to a grotesque maggot. Thankfully, nightmares end. This visual will probably stick with new dads for years to come. 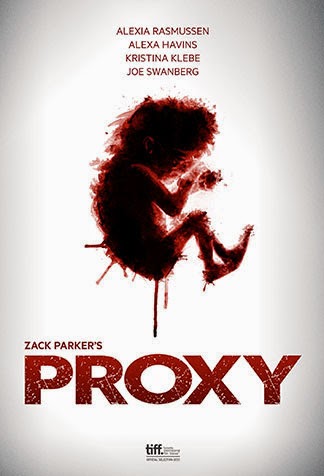 Patrick keeps recommending this movie to me (it's been available on Netflix since last summer). Then, moments later, remembering that my wife is pregnant, tells me, "Wait ... never mind." It's happened like five times now. He's also committed this ominous warning to print: "If you can make it through the first 10 minutes, you should be OK." I mean, WHAT'S UP WITH THAT? It's about childbirth, isn't it. ISN'T IT. So I still haven't seen it. Though I want to? Give me a few weeks. Although that poster ...

Rosemary's Baby is a piece of art (from a piece of shit), and a dreamy mindfuck to boot. But there really isn't a birth scene, per se. Rosemary (Mia Farrow) is drugged and tied to a bed by the Bramford Satanists. The evil Dr. Sapirstein (Ralph Bellamy) determines that she's actually in labor, after which she passes out. The birth supposedly takes place off camera, and, when Rosemary wakes up, she's initially told that everything's fine. After sleeping some more, the doctor returns and harshly informs Rosemary that the baby died shortly after childbirth due to "complications." You know, this really isn't the "scariest" scary movie. I mean, sure, in the late '60s, Satanism must've been a more serious, tangible threat. Today, that fear hovers right below getting your dick pics intercepted by the NSA. However, the thought of losing a child because of an arrogant doctor and his medical miscalculations is still HORRIFYING. 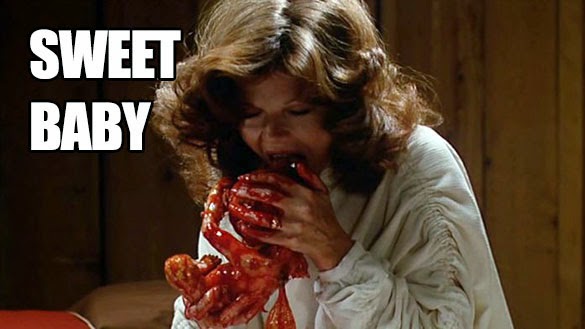 First things first -- when your baby is born, check to make sure that it has an umbilical cord/belly button. If it doesn't, it's either a.) Adam, first son of God, or b.) a member of THE BROOD, a collection of deformed, murderous dwarf children that were created in an external womb from psychoplasmic rage experiments on Nola Carveth (Samantha Eggar). It's a thing. 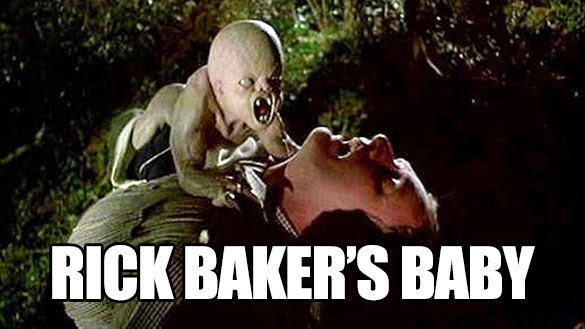 This one hits closer to home because it's about a couple's SECOND child. I'm thankful that science has come a long way in 40 years -- now we have genetic testing the explicitly rules out vicious mutant monster babies that kill when frightened. 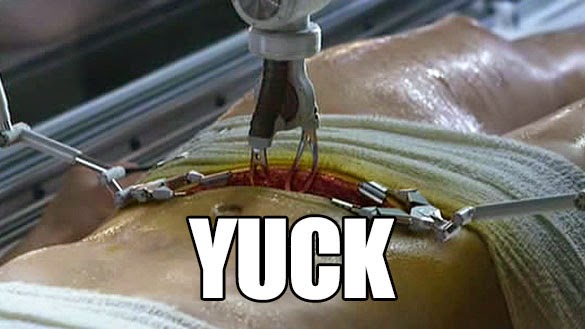 In a movie filled with bullshit, this surgery scene is one of the bullshittiest. I'm not even offended by the automated surgery capsule -- those effects are actually kind of cool. I'm more disturbed by the ability of Elizabeth Shaw (Noomi Rapace) to basically perform defensive aerobics immediately after having a basketball-sized squid removed from her sliced-open belly. If anything, though, this scene gives me faith in a speedy recovery for my wife if she happens to have a C-section. 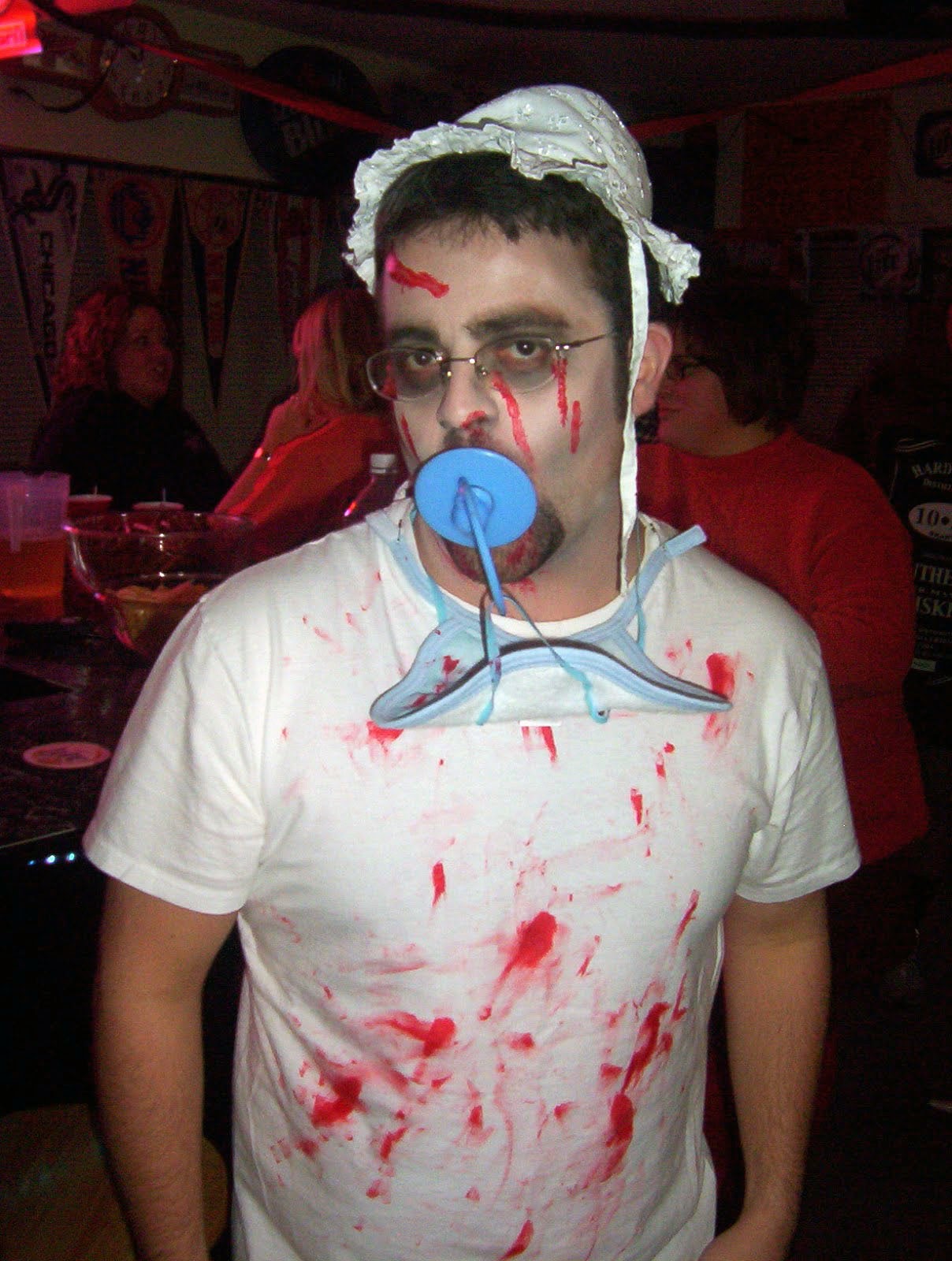 Last week, Patrick and I had an EPIC(?) disagreement(?) over which version of Dawn of the Dead we each like more. He prefers the original, while I lean toward visionary filmmaker Zack Snyder's remake. One of Patrick's bigger issues with that movie, however, is the appearance of ZOMBIE BABY. He might have a point. But I say SCREW THAT. In fact, if DotD '04 didn't have zombie baby, then we wouldn't have Mike Pomaro's best Halloween costume, like, ever (pic above). In conclusion? We're both right.

And with that I'll be taking a couple of weeks off. Wish us luck!
Posted by Patrick Bromley at 12:00 PM