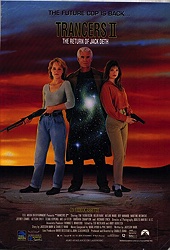 Everything is better with Megan Ward.

The original Trancers is one of the best movies in the catalogue of Charles Band's Empire Pictures, the studio he founded and ran through most of the '80s prior to his Full Moon days. It was certainly derivative of a number of other sci-fi films of the period (most notably Blade Runner), but it had its own funky kind of energy and a great noir-inspired performance from stand-up comedian Tim Thomerson, tongue firmly planted in cheek. The Richard Band score is terrific and the film is a really fun document of '80s Los Angeles, mostly thanks to Helen Hunt's punk character Leena. Trancers is, as I discovered when I saw it for the first time shortly after I began writing these "Full Moon Fever" pieces, a cool fucking movie. 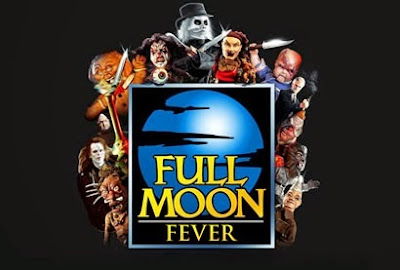 Near as I can tell, it's also the only movie made during the Empire years that was carried over into the Full Moon era (era) to be sequelized. Most of Empire's catalogue was absorbed by MGM, but Band held on to Trancers and finally got around to following it up six years after it was released. 1991's Trancers II: The Return of Jack Deth reunites all of the surviving cast of Trancers: Jack (Thomerson) is now married to Leena, both of whom have become totally domesticated. They appear to live with former ballplayer and former drunk Hap Ashby (Bif Manard), who is now a millionaire thanks to some good investments. Thinking that they have defeated the last of the Trancers, the gang is surprised to discover that Whistler's brother Dr. E.D. Wardo (Richard Lynch) has come back in time to revive the Trancer program under the guise of an environmental organization called GreenWorld, which is actually collecting homeless people and mental patients and turning them into murderous zombies. Also a surprise? Jack's wife from the future, Alice (Megan Ward), has been sent back in time too and is occupying the body of a young woman who is institutionalized. If she's going to help stop the Trancers, she's going to have to break out and reunite with Jack Deth. 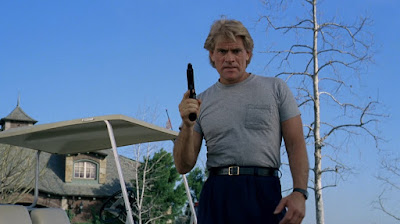 One of the problems with sequelizing a time travel story is that you no longer have the novelty of time travel on which to fall back for a dramatic arc. Once characters have learned about or experience traveling in time, it's much more difficult to find places for them to go. Some sequels offer variations on a theme (Back to the Future Part II) or introduce novelty (Terminator 2: Judgment Day) to reinvent themselves for a second go-around. Trancers II doesn't really do that. The basic plot is "there are some more Trancers." The villain isn't Whistler, but it is Whistler's brother (take that, Simon Gruber). Jack is no longer a fish out of water, having lived in present-day Los Angeles for the last six years. Leena is no longer having to be convinced that time travel is possible. The sequel is but an echo of the original, minus the things that made that movie dramatically compelling.

The only new wrinkle introduced in Trancers II is the appearance of Jack's wife Alice, but at least Charles Band was savvy enough to cast Megan Ward. Her first film role was for Full Moon -- 1990's Crash and Burn -- and she would continue to work for Band in movies like Trancers III and Arcade before going on to star in stuff like PCU and Joe's Apartment, as well as a successful run on Melrose Place. If you were the kind of boy movie geek who saw everything during the '90s, there's a good chance you had a crush on Megan Ward. She adds the spark that makes Trancers II work even when it doesn't. Helen Hunt is reduced to standing around and pouting and Thomerson's deadpan act doesn't work as well because he doesn't have the same kind of absurdity to play against. Ward, however, is adorable and actually has an arc to play, first having to convince people she's not crazy and get out of the asylum and later to learn of the fate that awaits her in the future and to let Jack Deth go. Ward is warm and likable and maybe the only person who could sell an insane line like "Jack Deth! The only man I've ever had sex with..." and make it sweet. She's the goods. 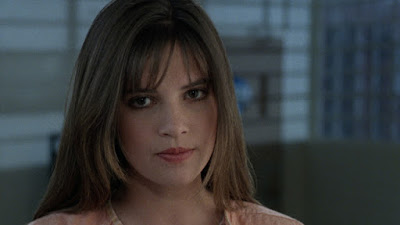 Director Charles Band makes a very unusual filmmaking choice that hobbles the entirety of Trancers II. The majority of the film (I didn't time it out, but it's got to be over 50%) is shot in singles, with one character in the frame at a time delivering dialogue directly into the camera. I don't know if this is him being inspired by the work of Jonathan Demme or what, but the effect is weird -- it cuts the characters off from one another completely and we rarely get to see them interact. Instead, it feels like they're interacting only with us, but the results don't draw us in or make us feel any more connected to them, probably because there's nothing that they say to which we can connect. Trancers II is almost entirely dependent on scenes of characters standing around and explaining things to one another. There's hardly any of the plot that's advanced through action or any kind of visual storytelling. It's all expositional dialogue.

There are scenes that could almost be screwball comedy if the editing were tighter. At the film's center is a love triangle between Jack, Alice and Leena -- he's trying to balance his present and future wife and reconcile both his present and future selves -- but the timing is all wrong for any of the rapid fire emotional shifts and exchanges in the screenplay by Jackson Barr (Subspecies, Robot Wars). Dialogue that should come at a fast and furious clip drags out with pauses and reverse shots, another victim of the clumsy style in which the film is shot. Occasionally a good line sneaks through and lands, most often a pseudo-hard-boiled exchange courtesy of Jack Deth like "Goddammit, McNulty -- the next time someone hands you and exploding ham I'm gonna pass the mustard!" Dialogue like that is a good indication that sluggish pacing and uninspired story aside, the people involved still understand the movie they're making. 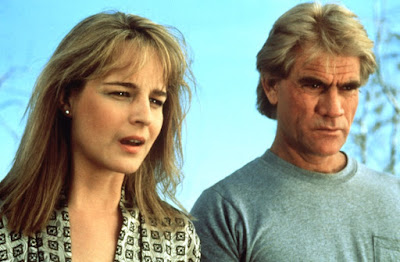 I'm a fan of the Trancers series (though I haven't yet gone beyond part 4), and I can enjoy Trancers II mostly for the stuff involving Megan Ward. Because it came in the early days of Full Moon -- the company was only two years old at this point -- Band stacks the deck and gets both Jeffery Combs and Barbara Crampton in supporting roles, though the former gets very little to do and the latter is just a cameo there to lend some name value. Trancers II is also responsible for kicking off the Full Moon shared universe, as Sonny Carl Davis makes his first appearance as Rabbit, the character he would play through all of the Evil Bong movies (which doesn't make much sense, because SPOILERS he is shot and killed during the climax of Trancers II). This sequel is mostly just a placeholder between the original movie, which I really like, and Trancers III, a sequel that goes in a totally new direction and is a ton of fun. The first and third movies are titles I could recommend to any genre fan. Trancers II is really just for series completists.


Buy Trancers II through the links below and support F This Movie!
Posted by Patrick Bromley at 12:00 PM