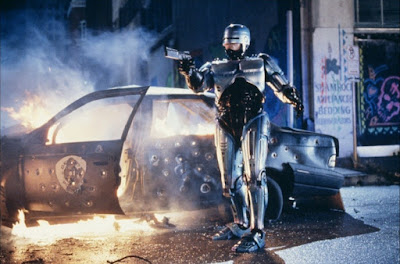 Bleep blorp. I am a robot. I am talking like a robot.

Today's 24 Hours of Movies theme suggestion comes from Mac McEntire. Thanks, Mac! If you've got an idea for a 24 Hours of Moves theme you'd like me to try this month, leave it in the comments below or email us at fthismoviepodcast[at]gmail.com. 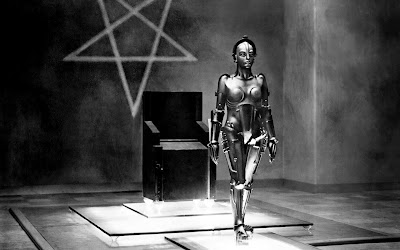 In the tradition of kicking off these themed marathons with some of the earliest examples of said theme, let us begin with one of the very first robot movies and a film still considered one of the all-time great science fiction epics. I still haven't seen the 148-minute restoration from 2010, so that's the one I'm programming here. Two and a half hours of silent German expressionism might be a tough sit at any other point in the marathon, so starting with this one makes sense. 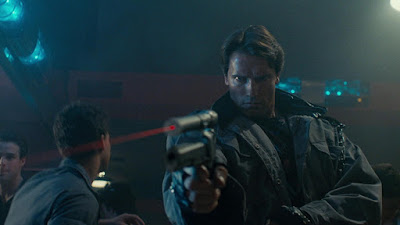 Just like when making a great mix tape, it's important to ramp things up for the second selection of a 24-hour movie marathon. The first of five increasingly lesser movies in the Terminator franchise is still my favorite James Cameron movie ("Tsap'alute!" [translated from Na'vi: "I'm sorry!"]). Part sci-fi classic, part slasher movie, all relentless action film, The Terminator is basically a perfect movie from start to finish and features one of the greatest killer robots ever to grace the screen. Like Pulp Fiction and the original Nightmare on Elm Street, this is one of those films that's so entrenched in the pop culture consciousness that I think people forget just how great it really is. 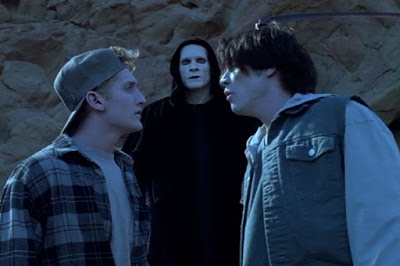 There are so few good comedy sequels. There are even fewer great ones. Bill & Ted's Bogus Journey is one of the rare movies in that latter category -- an incredibly clever and smart comedy passing itself off as something dopey. Bill (Alex Winter) and Ted (Keanu) are murdered by evil robot versions of themselves sent from the future and must escape from Hell to save their princess girlfriends and prevent a "darkest timeline" future. We watched this for F This Movie Fest 2 a few years back and it blew the doors off the place (the place = Twitter) because it's such a winning comedy bursting with funny ideas and performances. I haven't even mentioned William Sadler's amazing turn as Death! This movie is incredible. Station. 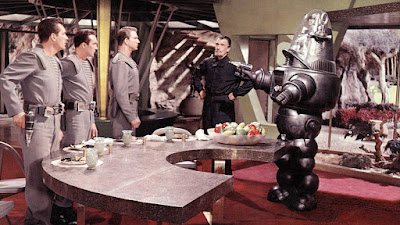 An obvious inclusion, as Forbidden Planet features one of the most famous movie robots ever in Robby, who would go on to become such a pop culture icon that he actually had a career co-starring in other projects. There's a reason this became such a genre classic: the widescreen Technicolor compositions are stunning, the production design breathtaking, the Anne Francis jaw-dropping. It's one of those movies I just want to live in.

Since most movies that feature robots tend to be science fiction, I want to try to mix it up a little bit and program at least a couple of movies that don't take place either in the future or in outer space. While still technically sci fi at the end of the day, the original Stepford Wives is much more of satirical drama/horror movie that tackles '70s gender politics head on and makes excellent use of creeping dread. Hopefully it will make for a good breather, as it's a movie made in a period in which movies were allowed to breathe. The really good news is that this has never been remade as a comedy starring Nicole Kidman and Faith Hill. 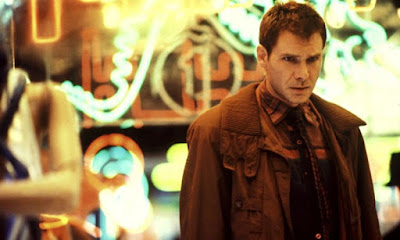 Of course the primetime slot is being given to one of the best movies ever made, in which the robots are great even though we never see them as robots -- they end up being the most human characters in the film. Most dystopian science fiction released after 1982 has just been copying Blade Runner's example, but nothing else has touched it in terms of beauty, resonance or pure technical filmmaking craftsmanship. I like the idea of building up to Blade Runner in this marathon and then not trying to live up to it afterwards, but rather watching stuff that approaches artificial intelligence in a totally different way. There's only one Blade Runner, so let's not even try to duplicate the experience. Until they make that stupid sequel, of course. 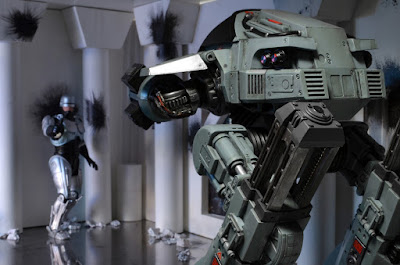 I set out to create a really varied lineup in which robots appear across all genres and all kinds of movies, but there's no point in programming fucking Heartbeeps just so I can say I watched a comedy when all I really want to do is watch RoboCop and a bunch of other really cool movies. This is a movie that feels made for me as much now as it did at 10 years old. I love the comic book futurism, the horror movie creation myth, the insane gore, the wild satire and outrageous humor. Like The Terminator, RoboCop is perfect. 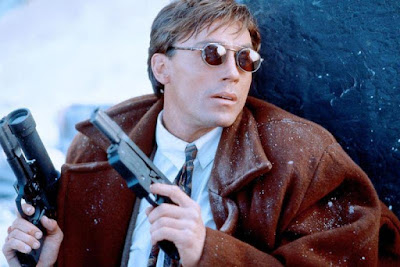 With its wild sense of humor and crazy over-the-top violence, RoboCop already makes a great segue into the overnight portion of our marathon. Nemesis just confirms it. Director Albert Pyun's first foray into cyberpunk is one of his most ambitious, most accomplished films, and while star Olivier Gruner isn't much of a leading man (he was cast against Pyun's wishes), the wildness of the film around him makes up for it. The US DVD is long out of print, but there's a box set in both Germany and the UK that includes this film on Blu-ray alongside its many sequels, none of which I have seen. I'm not saying it's my birthday month, but it is my birthday month. 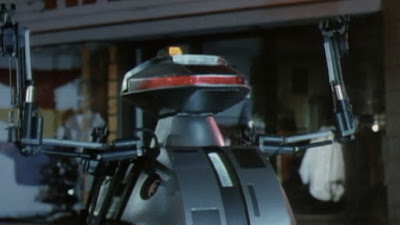 Of the 850 or so movies Jim Wynorski has directed (many made under various pseudonyms), this is one of the few I've seen that I can tolerate. In fact, tolerate is too weak a word -- I actually have a lot of fun with it. Much of that is thanks to its cast, which includes Kelli Maroney and Barbara Crampton, as well as Paul Bartel and Mary Woronov in cameos (as their Eating Raoul characters!).  It's also thanks to its goofy premise, which finds mall security robots (the movie was originally called Killbots, a much more accurate title than the slasher-sounding Chopping Mall) going berserk and trapping/killing the patrons inside. Yes, this is the perfect movie to watch at 2 a.m. It also features one of the all-time great exploding head gags. 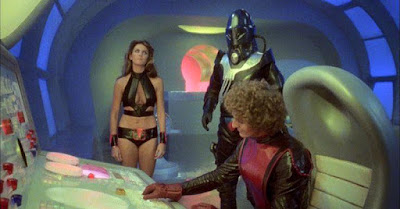 Yessss. The Italians reclaim the 2 a.m. slot with Luigi Cozzi's weird, wild Star Wars rip-off produced by Roger Corman and with a cast that includes Caroline Munroe, Marjoe Gortner, David Hasselhoff, Joe Spinell and Christopher Plummer. The effects are all hand-made and wonderful, the plot episodic and almost nonsensical. I love it a lot and would be willing to watch it even without Caroline Munroe wearing a leather bikini through the whole movie. Doesn't hurt, though. 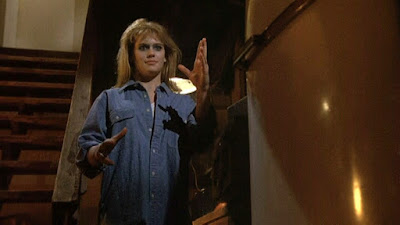 The late, great Wes Craven tried several times to recapture the combination of teenage angst and horror he perfected in A Nightmare on Elm Street but never quite succeeded (the closest he came -- and it's very close -- was with the original Scream). In this one, Matthew Laborteaux plays Paul, a geeky teenager building his own robot; when his best friend/neighbor Samantha (Kristy Swanson) meets with an accident, Paul uses his robot technology to bring her back to life. It does not go well. Test screenings and studio pressure forced Craven to insert a bunch of graphic violence (including the once scene anyone remembers from the movie), leaving this one severely compromised. It's not very good, but it's good for 4:30 a.m. 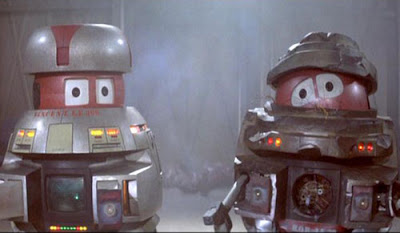 This is the only movie in the lineup I've never seen, and while it's probably not a great idea to tackle it after 20 hours and 11 other movies I do want to squeeze it in and this is the best spot available. Like Tron, this a movie that I grew up having a real awareness of (I think my brother had some of the toys?) but which I never got around to seeing. There's no real risk here, because even if I don't like it very much it's surrounded almost exclusively by 13 other movies I love. 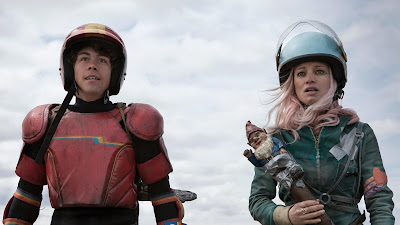 Early mornings require a pick-me-up, and nothing is guaranteed to pick me up more than last year's Turbo Kid, a movie I love dearly and about which I have already gushed endlessly on this site. It fits the theme of the marathon but not in a way that's obvious on the surface; if you haven't yet seen it (why haven't you seen it yet?) you'll understand its placement afterwards. This marathon is stacked with favorites of mine. Turbo Kid has to be included. 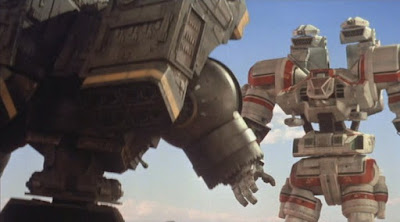 This slot was almost given over to last year's Ex Machina, a thoughtful and excellent sci-fi movie about artificial intelligence and gender politics. But that's a little heavy for the 25th hour, so instead I'm going with the very big and very silly Robot Jox, very nearly the final film distributed by Charles Band's Empire Pictures (the company put out one more movie, Spellcaster, in 1992 after Full Moon Features was already up and running). I'm still not fully on board with Gary Graham's performance as the hero Achilles, but I love the colorful Saturday afternoon matinee feel that Gordon creates and Dave Allen's stop-motion effects in the robot battles are super fun. 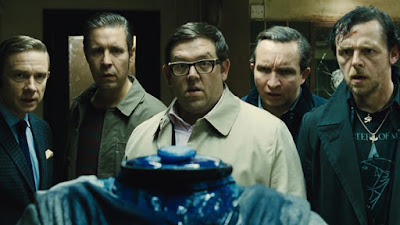 Yes, we're over 24 hours at this point, but the only way to finish our marathon is with the end of the world as seen by the great Edgar Wright. The third and final film in his Cornetto trilogy deals with robots and aliens and the apocalypse as well as with friendship and nostalgia and life not working out the way we thought it would. It's the perfect movie on which to end the marathon, seeing as it's all about looking back and examining our choices. After nearly 30 straight hours of watching movies about robots, that's exactly what we'll be doing, too.

Movies I wanted to include but couldn't: Sleeper, Westworld, Hardware, The Iron Giant, Saturn 3, Ex Machina, Aliens, Return to Oz
Posted by Patrick Bromley at 12:00 PM