24 Hours of Movies: Change of Heart 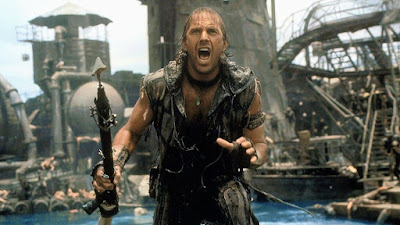 Never give up on a movie.
One of the very, very few things I like about myself is my ability to give a movie -- even one I didn't dig the first time I saw it -- more chances, knowing that while a film can never change, I can (and hopefully do). Were I only willing to watch a movie once and assume I had gotten everything I was going to get from it, or were I to write off those movies that didn't connect with me on first viewing, I would be denying myself a lot of movies I've come to love a whole lot. That's the theme of this 24-hour marathon: they're all movies that, for one reason or another, I wasn't crazy about the first time I saw them but over time or over repeat exposure grew on me in new and unexpected ways.
10 am - Mars Attacks! (1996, dir. Tim Burton) 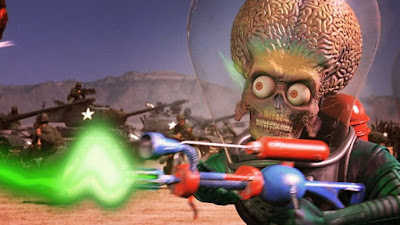 Watching this last weekend as part of F This Movie Fest is what inspired this marathon, because I remembered not loving this when it came out. I thought it was too nihilistic and mean-spirited, which it sort of is, but now I've made piece with it and enjoy the anarchy of it all. I'm programming it first because that's where we watched it in the FTMF lineup and I thought it played really well. A movie with as many gags as this one has is going to do well in a marathon.
12 pm - Waterworld (1995, dir. Kevin Reynolds) 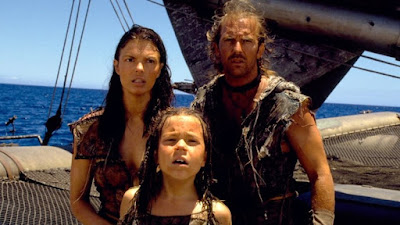 Years ago, Doug and I did a podcast on Waterworld during which I came to terms with the fact that I liked it. I had previously believed I was mixed on the movie but knew I had a compulsion to revisit it every year or so, a fact which I finally came to understand meant that I was a fan. These days there's no question that I really love Waterworld, particularly in the extended three-hour "Ulysses Cut" form, which is what I'm choosing to program here. It makes a good movie even better.
3 pm - Full Metal Jacket (1987, dir. Stanley Kubrick) 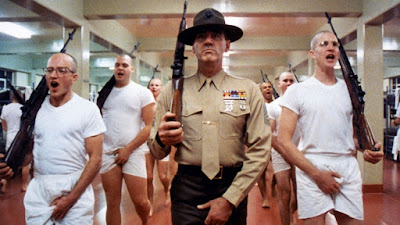 Here's a case where I didn't dislike a movie so much as I didn't get it. That's true of almost every Stanley Kubrick movie up to and including when I saw Eyes Wide Shut on opening night in 1999: I liked it, but not as much as I thought I should. I always felt like I didn't "get" Kubrick the way I was supposed it, and as a result felt stupid every time I watched one of his movies for the first time and didn't immediately fall in love with it. It would only be on repeat viewings that I could really appreciate the greatness of what Kubrick offers every time. I don't know that Full Metal Jacket is my favorite Kubrick movie, but it's the one I return to the most.
5 pm - A Nightmare on Elm Street 5: The Dream Child (1989, dir. Stephen Hopkins) 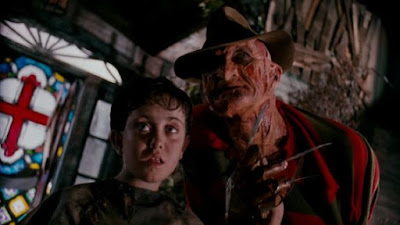 For a long time, I think I shared in the accepted wisdom that this was among the weakest of the many Elm Street sequels. It was a combination of seeing the Never Sleep Again documentary, knowing what the filmmakers were up against, and coming to love and appreciate the filmography of director Stephen Hopkins (Hopkins bump!) that I really started to appreciate the avante garde weirdness and abstract beauty of The Dream Child. It has many of the same problems as other Elm Street sequels, but I prefer to most of them now. Luckily I have a friend like Adam Riske who loves it as much (or more) as I do.
7 pm - Avatar (2009, dir. James Cameron) 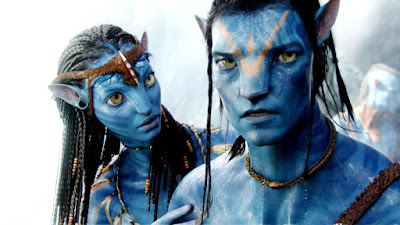 No surprises here, as this is the movie that has become synonymous with "change of heart" for me and those who know me. My love of Avatar is one of the foundations on which this site is built, as it was our first ever podcast and then become the only movie we've podcasted a second time when we celebrated our 10th anniversary in 2020. I know I'm never going to convince its detractors that it's a good movie, but I don't really care. My relationship to a given movie is all that concerns me, which is why I'm always willing to give them multiple chances. I'm happy to love this movie.
10 pm - 8mm (1999, dir. Joel Schumacher) 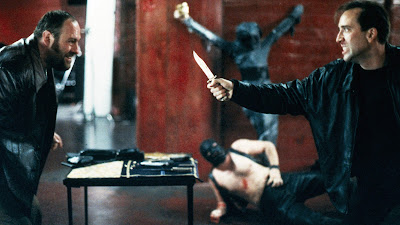 Seeing this back in 1999, I remember thinking it was like Andrew Kevin Walker fan fiction despite being written by Andrew Kevin Walker. Joel Schumacher seemed like the wrong guy to do Se7en-style bleakness and despair, playing pretend rather than knowing the world. I revisited it on the Scream Factory Blu-ray a couple years back and this time watched it as more of a noir thriller; on that level, it actually works quite well. It helps to have Nicolas Cage as my anchor, as I'll always be more accepting (forgiving, even) of anything he's in.
Midnight - Dawn of the Dead (1978, dir. George A. Romero) 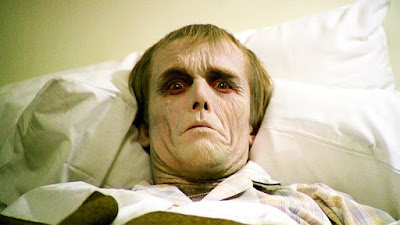 Let me explain. My first viewing of George Romero's zombie masterpiece (one of them, anyway) was a victim of both youth and inflated expectations. I was in maybe 7th grade and had read Roger Ebert's four-star review and knew I had to see the movie immediately, as most of his four-star reviews were not for horror movies. I watched it on VHS by myself one night and was way too young to appreciate anything but the gore; the clever characterization and sharp satire went over my head and I was left watching a movie in which zombies get pied if the face. Now it's one of my 10 favorite movies of all time. I know there are plenty of people who saw this one far younger and had it click for them, but what can I say? Some movies you just aren't ready for.
2:30 am - City of the Living Dead (1980, dir. Lucio Fulci) 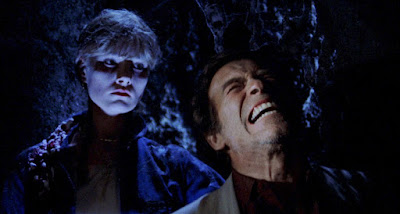 Seeing this movie in the middle of the night during a 24-hour marathon is what codified my Overnight Italian Weirdness rule. At the time, however, I wasn't into it. My relationship with Italian horror is better explored on this site than my relationship with Avatar, so anyone who has been here for a while knows full well that it started as something I couldn't get into and eventually grew into something I dearly love. Ten years ago, Fulci represented an entire subgenre that kept me at arm's length. Now he's one of my favorite filmmakers. Funny how that works.
4 am - House by the Cemetery (1981, dir. Lucio Fulci) 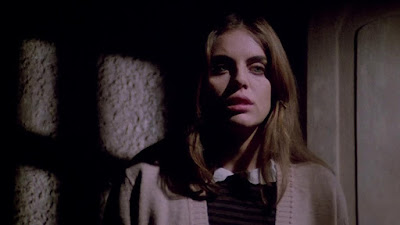 I normally wouldn't program two movies from the same director right in a row, but this one is in the same position as City of the Living Dead: I saw it overnight as part of a 24-hour horror marathon and just didn't get it at the time. I think I was looking to make sense of it rather than giving myself over to its nightmarish qualities and appreciating the brilliance of the set pieces, the score, the effects. It, too, has become of my favorite Fulci films, behind only The Beyond and the movie that immediately precedes it in this marathon.
6 am - Goodbye Lover (1999, dir. Roland Joffe) 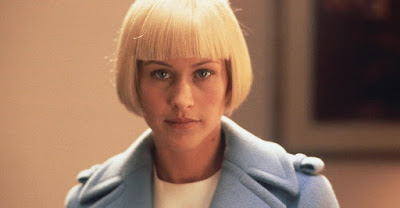 I saw this in theaters in 1999 and didn't think a ton of it. Of course, it wasn't helped by the fact that it was the sixth of a six-movie day. I'm not sure I would have loved anything I saw in that slot. Revisiting it during a recent neo-noir kick reveals a pretty good little dark comedy thriller, one which features Patricia Arquette giving great femme fatale and a weirdly-cast and poorly-wigged Ellen Degeneres as the cop trying to bring her down. Director Joffe goes overboard on the style in a good way, and the script (co-written by Joel Cohen, so it's a miracle Bill Murray didn't sign on) has enough twists to keep things consistently interesting. This is good 6 am viewing.
8 am - Jurassic World (2015, dir. Colin Trevorrow) 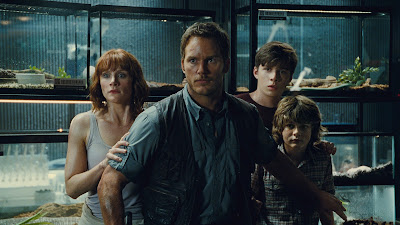 My most recent turnaround is on this movie, which I really didn't like in 2015 but then rewatched with my daughter on 4K UHD a few weeks back and had an unreasonably good time with. The characters are still pretty bad and the product placement is unforgivable, but at least it's the first movie since the original to do something different with the premise by actually delivering on the promise of what would happen if dinosaurs broke out at an open, packed amusement park. I can't account for the change of heart except to say the same thing I'm always saying, which is that I was able to see it for the movie it is instead of the movie I wanted it to be in 2015. That's the kind of perspective that only repeat viewings can provide.
Never give up on a movie.
Posted by Patrick Bromley at 5:00 AM