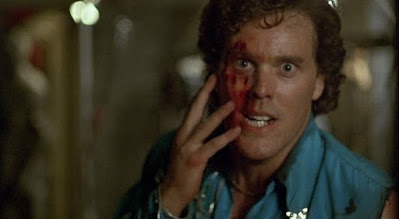 A whole marathon devoted to my favorite kind of filmmaker!
I've talked a lot on this site about my love for "That Guy" directors. I even recently did a guest spot on friend of the show Matt Bledsoe's Film Feast podcast about the very topic. When I was trying to think of a theme around which I could base one of these 24-hour marathons and my wonderful wife Erika suggested "That Guy," the idea was too good to pass up. Get ready for some cool movies. 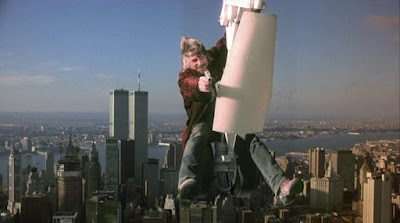 Let's start with a total banger. Peter Weller is a lawyer and Sam Elliott is a grizzled cop (because Sam Elliott) and they team up to take down police corruption. There are great characters, great performances, and some great set pieces all through this thing. I love that this is James Glickenhaus (Soldier, The Exterminator) shooting his shot at a major studio because it proves he should have gotten a bunch more chances. Instead he went back to independents and self-distribution. At least we'll always have Shakedown.
Noon - Rapid Fire (1992, dir. Dwight H. Little) 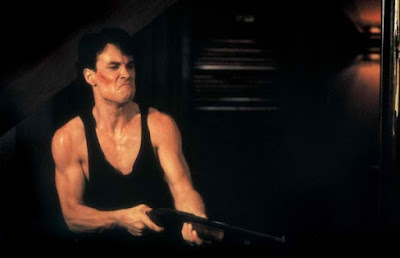 A lot of the movies in this marathon are going to be genre films -- mostly action and horror -- because it's where "That Guy" directors do most of their work. Like with all great mix tapes, I'm a big believer in kicking it up a notch for the second movie, so why not follow Shakedown with one of the best action movies of the '90s and one of my favorites of all time? Dwight H. Little is a quintessential "That Guy" director and this is his best film, as well as being the one that really shows what we lost when we lost Brandon Lee too young.
2 pm - Stay Tuned (1992, dir. Peter Hyams) 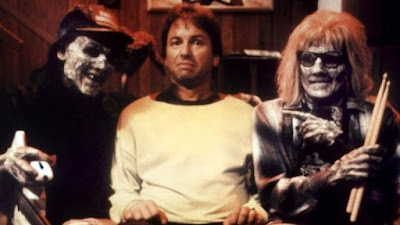 There are a lot of Peter Hyams movies I like better than this one, but I'm trying to mix it up and program a comedy instead of just action movie after action movie (not that there would be anything wrong with that). The premise is inspired -- Satan installs a satellite dish that sucks a family into their TV and its programming -- and John Ritter and Pam Dawber are inspired casting, but I'd be lying if I said the finished product was as funny as I'd like it to be. Still, I love Peter Hyams and want him represented in this marathon, and I like the placement of this movie. Plus that Three's Company gag is still pretty sick.
3:30 - Radioactive Dreams (1985, dir. Albert Pyun) 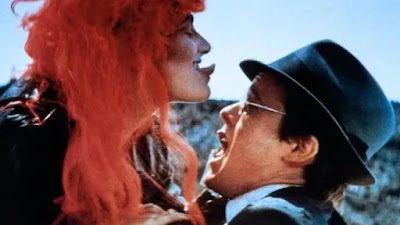 My beloved Albert Pyun isn't quite a "That Guy" director because he's such a singular stylist, but he was so prolific and made so many fucking movies that I think he fits under the category. One of my very favorite Pyun movies is this sci-fi comedy starring Michael Dudikoff and John Stockwell as detective-obsessed friends looking for their fathers in a post-apocalyptic wasteland. It's the kind of offbeat, futuristic comedy/musical that could only come from Pyun's fevered imagination. Too bad we'll have to stream it off YouTube because there's still no DVD or Blu-ray.
5:30 - Quigley Down Under (1990, dir. Simon Wincer) 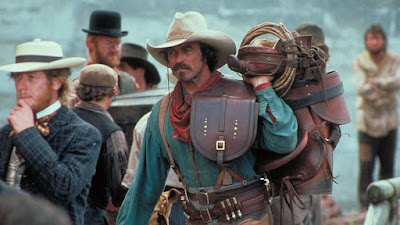 I love this movie. It's a western set in the Australian outback starring Tom Selleck at his most movie-star charismatic and Laura San Giacomo being in a movie, which is always cause for celebration. The photography is gorgeous, the score rules, and it's got Alan Rickman doing another terrific villain turn. Movies like Quigley Down Under are why we go to the movies. Plus, Adam Riske will be happy that two of my "That Guy" directors made Free Willy movies.
7:30 pm - The Hidden (1987, dir. Jack Sholder) 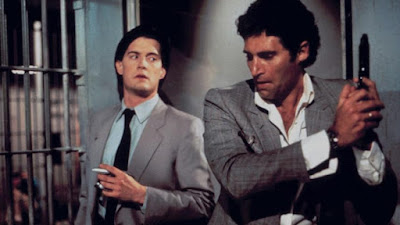 With so many movies in our marathon fulfilling the same B-grade status (which I mean as a compliment), it's hard to pick a headliner. I decided to go with Jack Sholder's great sci-fi actioner in which an alien life form jumps from body to body, with Kyle MacLachlan and Michael Nouri in pursuit. Sholder is a former editor (like some other "That Guy" directors including Mark Goldblatt and Stuart Baird) and it shows in his ability to put a propulsive movie together. The Hidden is sly and smart and kickass. Can't wait to watch it during pizza time.
9:30 Vice Squad (1982, dir. Gary Sherman) 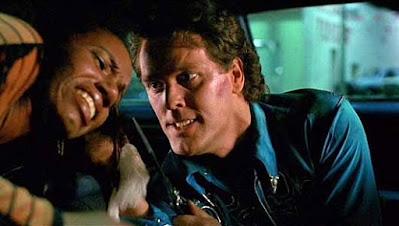 It was tough picking which Gary Sherman movie should transition us to the overnight section of our marathon, but I think going with Elric Kane fave Vice Squad is the right choice. Wings Hauser plays a killer pimp named Ramrod and you should have already stopped reading to order the Blu-ray but Season Hubley is also in the movie as the hooker helping to bring him down. I kind of like that we'll need to take a shower when this one is over but we can't because there's still half a marathon to go.
11:30 pm The Prowler (1981, dir. Joseph Zito) 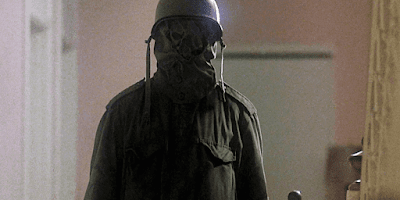 As is the case with almost every single movie I programmed in this marathon, it was very difficult to pick just one Joe Zito movie. I decided to go horror over action and play his great slasher The Prowler as we head into the overnight. A brutal and violent horror film (with gore effects courtesy the great Tom Savini), The Prowler is one of those movies that's beloved amongst diehard horror fans but not really known outside of that audience. It deserves to be more widely recognized.
1 am - Class of 1999 (1990, dir. Mark L. Lester) 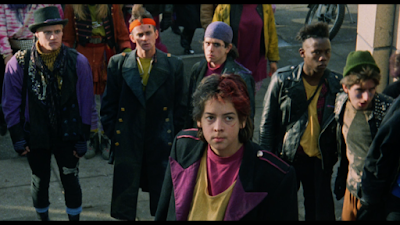 I came close to slotting Mark L. Lester's original Class of 1984 here but opted for the batshit sci-fi sequel instead if only because it doesn't have the same reputation for being a classic even though it totally should be. Lester simply flips the script for his sequel, pitting a bunch of punk teenagers against teachers (again), only this time the teachers are evil robots. Full of great practical effects and explosions and shit, Class of 1999 is further evidence that almost no one made better B movies than Mark Lester. This movie is a blast.
3 am - Friday the 13th Part 3 (1982, dir. Steve Miner) 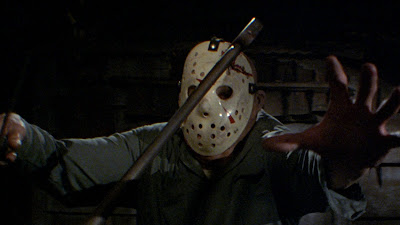 I just had the opportunity to see this in 35mm in actual 3D at the Music Box in Chicago and it actually transformed the way I look at a movie I already loved. I was blown away by not just the clever use of 3D, but the actual formal compositions going on in the movie -- it goes way beyond stuff poking out at the camera and obvious gags and stuff. I've always been a fan of Part 3, but I have a whole new appreciation for it on a technical level now because Steve Miner is a great filmmaker. Let's watch it in 3D during our marathon.
5 am - The Ghost and the Darkness (1996, dir. Stephen Hopkins) 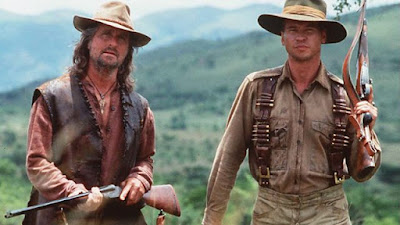 I wanted to be sure to program a Stephen Hopkins because he's the best, and for some reason this one seemed like the right one to watch early in the morning when we're still groggy and drunk on violent trash. It's an old-fashioned adventure film about a railroad engineer (Val Kilmer) and a hunter (Michael Douglas) trying to stop some maneating lions from a killing spree in Africa. Hopkins was on fire during the '90s, and this is one of his best movies. Shout! Factory just put this out on Blu-ray finally, so if somebody brings a copy we won't have to watch my shitty non-anamorphic DVD.
7 am - Stone Cold (1991, dir. Craig R. Baxley) 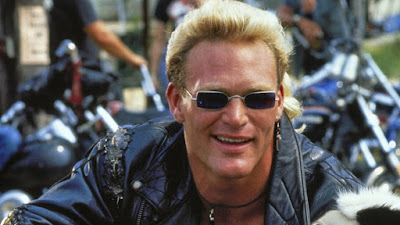 We have to have a Baxley in here, and if The Ghost and the Darkness doesn't wake us up, this one will. In fact, Stone Cold will kick our asses into high gear and make sure we're awake. Football star Brian Bosworth goes undercover to infiltrate a biker gang led by Lance Henriksen, with an out of control William Forsythe as his number two. I don't think I've ever met someone who watched this movie and didn't enjoy it, and that's because former stunt coordinator/2nd Unit director Craig R. Baxley goes so hard, from the over the top dialogue to the wild stunts and action. God forgives. The Brotherhood doesn't.
8:30 am - Predators (2010, dir. Nimrod Antal) 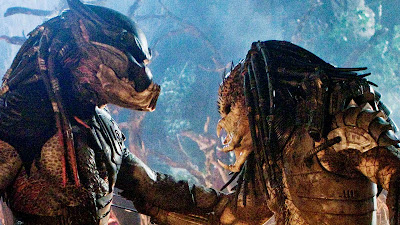 We'll end with a little bit of a cheat, because Nimrod Antal never quite reached "That Guy" status. He was well on his way, though, as movies like Vacancy, Armored, and Predators are exactly the kind of meat-and-potatoes genre films that define a "That Guy" director. He was going to be one of the greats of the modern era (era), but hasn't directed a Hollywood feature since Metallica: Through the Never in 2013. With Prey still fresh on everyone's mind, I'd like to end on what I consider to be the most underrated of the Predator franchise, one that builds the world out in interesting ways while still maintaining the tradition of excellent action established by the first two movies. It's a good way to close out a pretty cool marathon.
Posted by Patrick Bromley at 5:00 AM