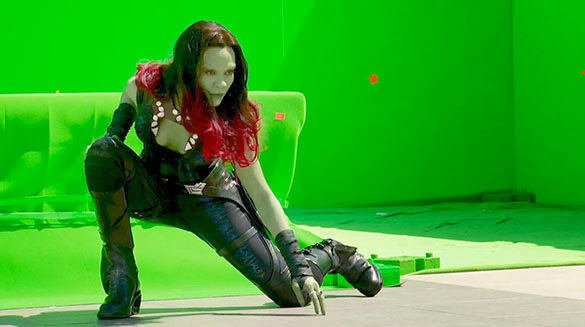 It's a slow week, so let's all just sit back and look at some pictures.

These 10 photos are from the 10 highest-grossing films of 2014. Unfortunately, this means that Michael Bay is included too. Also, this year's color theme is decidedly green, because SO MUCH CGI. I guess that's the case when the movies that make the most money are action-packed summer blockbusters. 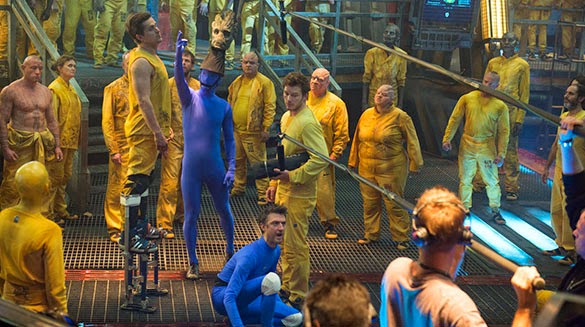 Between the main banner pic of real-life alien Zoe Saldana (playing make-believe alien Gamora) and Ms. Saldana's alien performance of alien Neytiri (Na'vi princess of the Omaticaya clan) in Avatar, Patrick has his fap calendar booked for 2015. But let's focus on this prison scene shot featuring stand-ins for Groot and Rocket. And, oh, who's that I see front and center? Why, it's Sean Gunn! Brother of director James and [more notably] quirky Kirk Gleason from Gilmore Girls! 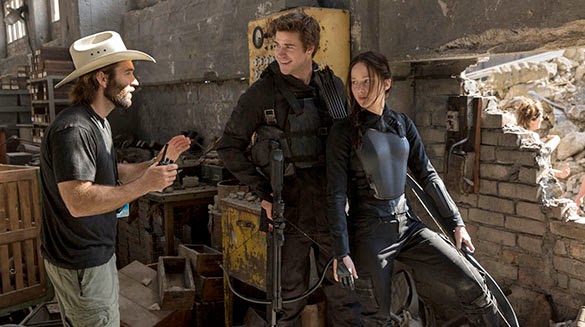 Don't let Liam Hemsworth's (Gale Hawthorne) dreamy, million-dollar smile confuse you -- this is a serious scene in a boring movie! And no, I have no idea who that meatball is on the left. I'm assuming ... Philip Seymour Hoffman's dealer? #toosoon 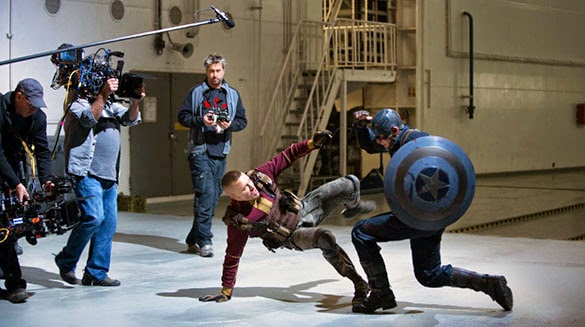 I chose this pic of Cap (Chris Evans) fighting a no-name villain (I know, I know ... he has a name -- Georges St-Pierre as mercenary Georges Batroc [HAPPY?]) over this pic of Anthony Mackie as Falcon because Falcon is a lame character. And I say this as a fan of the film! In fact, it's one of my top 10 movies of 2014. But I shoot from the hip. I'm a gunslinger, baby. So, yeah ... to summarize, Anthony Mackie is cool; Falcon sucks. 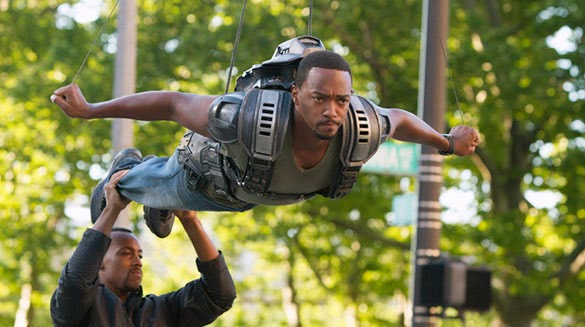 This one's a cheat because there aren't any real behind-the-scenes photos from this funny computer-generated film. Unless you count pictures of slack-jawed animators staring vacantly at giant computer screens surrounded by empty Chinese food takeout containers. And I don't. So enjoy this Warner Bros. Pictures-produced featurette on the making of the movie! I AM A SELLOUT. 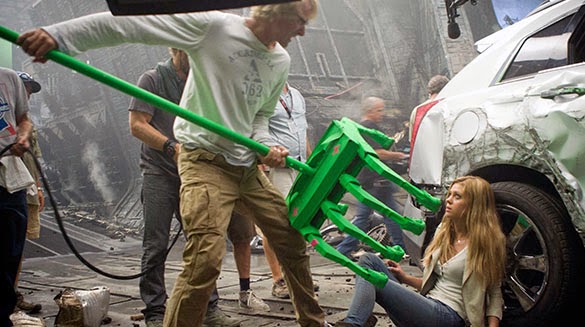 This picture is a perfect, literal representation of Michael Bay's despicable opinion of women. Fun fact: immediately after the assault, Bay regaled his victim (actress Nicola Peltz, playing Tessa Yeager) with historically inaccurate tales of the Aaron Burr and Alexander Hamilton duel from that one "Got Milk?" commercial he directed in 1993. 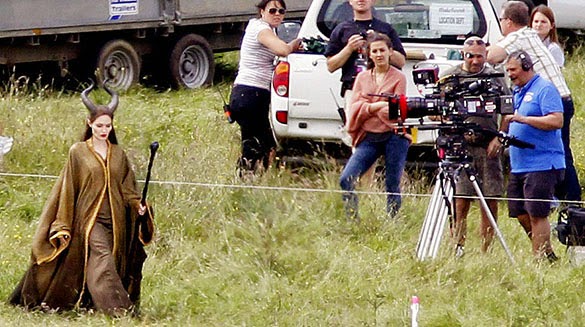 Not sure if this is a behind-the-scenes pic, or just Angelina Jolie out for a stroll on a normal Tuesday morning. 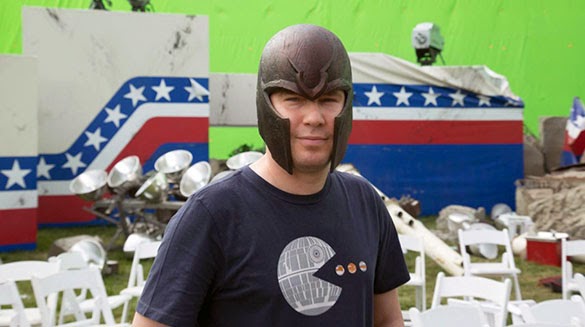 Here is director Bryan Singer wearing Magneto's helmet. I really don't have too much to add. Sure, I could make a superficial joke about his fat face filling in all the helmet's crevices. But I've gained a few pounds myself over the past few months. Or I could say something snarky about his Pac-Man-meets-Star Wars hipster T-shirt. But it's pretty awesome, and I kind of want one. Truth is, I'm jealous of Bryan Singer. For SO MANY reasons! Not the least of which is because he had a bit part in Star Trek: Nemesis. 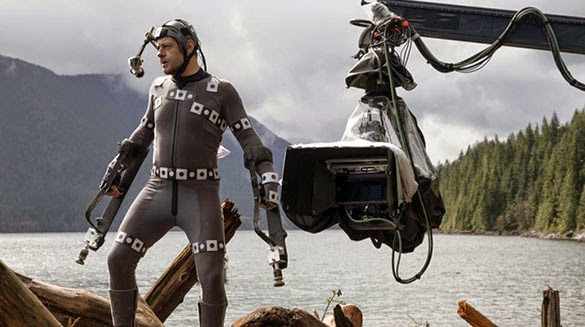 Andy Serkis up to some monkey business. #dodougsjobforhim 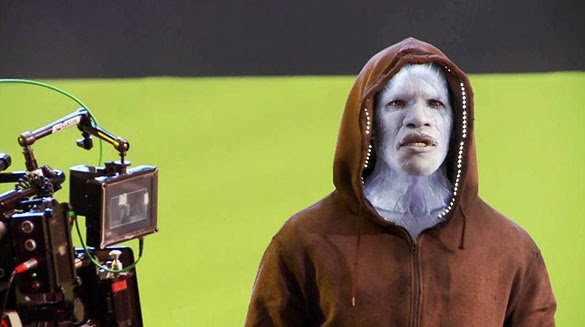 Yep. That's Jamie Foxx as Max Dillon/Electro. And, unlike my Bryan Singer realizations from two posts ago, I have no problem knocking this egomaniac down a peg or two. The only problem? He was SO GOOD in Django Unchained, I have a hard time ripping into him. But just look at this picture! It fills me with rage. And I can't quite figure out why. It's just ... look at him! 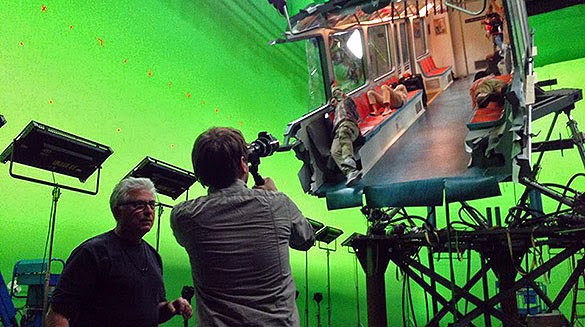 Two things: 1.) this photo is WAY TOO BRIGHT to be from this year's Gareth Edwards reboot. And, 2.) something is noticeably missing from the picture. What could it be? Hmmm. Finally, here's a bonus behind-the-scenes video on YouTube.

Happy New Year everyone!
Posted by Patrick Bromley at 12:00 PM

Email ThisBlogThis!Share to TwitterShare to FacebookShare to Pinterest
Labels: 2014 movies, amazing spider man 2, behind the scenes photos, best of 2014, dawn of the planet of the apes, flick bait, godzilla, guardians of the galaxy, maleficent