For Heath Holland, 2014 just doesn’t get any better than this.

2014 was a pretty good year for movies, and it definitely brought me more hits than misses this year. While there are still some consequences to living in the artistic anus of America (meaning I wasn’t able to see a couple of movies like Nightcrawler and The Homesman), I was able to catch up with nearly everything I wanted to see throughout the year. Let’s boogie.

I’ve put this at the bottom for a reason. I know, okay? I KNOW. You can listen to an entire podcast to hear me gush about the way this movie affected me, and yes, still does. The faults of the movie are more apparent to me than they were on that podcast, and I recognize it as a studio movie and a producer’s movie more than a director’s movie. Not all of it works very well, and some of it doesn’t work at all. Still, in spite of all that’s working against it, there’s a lot more that I like than that I don’t. It’s the little character beats, rather than the broad strokes, that really draw me in, and those little things make this interpretation of Spider-Man speak to me in ways that others haven’t, for some reason. I can’t explain WHY any better than that, but I can’t deny the truth, either. 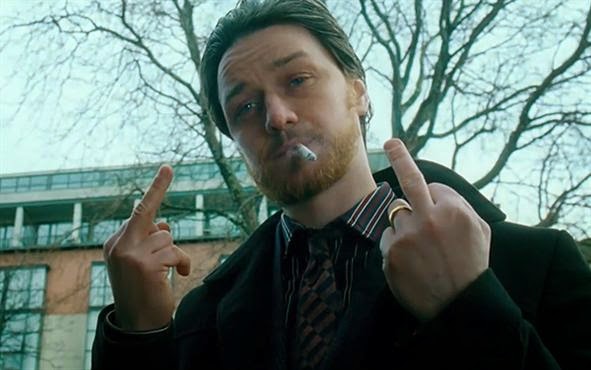 I’m not the kind of guy who usually recommends seeing a movie for one actor’s performance, so when I say that James McAvoy really impressed me in Filth, I mean he REALLY impressed me. I don’t think the overall movie works; I’m convinced that it thinks it’s darker than it actually is, and I think the detours it takes into surrealist comedy utterly fail. But McAvoy, man. MCAVOY! His crooked, substance-addicted cop who does horrible things while wearing his badge is really something to behold. I’ve started to hate showy, scene-chewing performances in the last couple of years, but McAvoy manages to balance his out with some quiet, subtle moments that blew me away. This 2013 British movie didn’t show up here until this summer, but I’m glad it finally did, if for no other reason than to show what McAvoy is capable of. If you enjoy his work but haven’t watched this movie, it’s a must-see.

Enemies Closer, starring Jean-Claude Van Damme and Tom Everett Scott, is a low-budget action film from director Peter Hyams, the man behind the earlier Van Damme films Timecop and Sudden Death. Tom Everett Scott plays a forest ranger with a military background who squares off against Van Damme’s villainous drug lord in the North American wilderness. I saw this early in the year and it made a big impression that’s stuck with me ever since. It’s not a GREAT action film, but it’s very good, and it delivers the things I want from this kind of movie. Of all the “old school” action movies that came out this year, this is the one that I think was most successful. It shouldn’t be that hard to make a solid, classic-style action film with a relatively low budget, and I think other movies could learn from Enemies Closer.

I wasn’t all that excited about this movie before I saw it; the comics that it’s based on are revered, so I was prepared for a pretty close adaptation with few surprises. Luckily, these Marvel movies only use those classic comics as a jumping-off point. The films have their own ideas and go to places that work best for a MOVIE. Comic books are awesome, and I’ve dedicated a lot of my life to them, but I don’t want to see a filmed version of a story I’ve already read. Comics and movies are completely different things, and if the movies are going to be any good then they’re going to have to tell their own stories and play to strengths of FILM. It’s not as simple as filming classic comic books scene for scene, and I now think that Marvel gets that more than any other studio currently making superhero fare. The printed comic book storyline Captain America: The Winter Soldier stands almost completely apart from the cinematic Captain America: The Winter Solider, which is the way it should be. Oh, and it’s an awesome movie.

Perhaps you’re wondering why Brett Ratner’s version of Hercules is on this list and The Hobbit: The Battle of the Five Armies is not. The answer is because Hercules tells an epic fantasy story filled with breathtaking landscapes, sweeping battles, fantastic beasts, and truly evil bad guys without ever feeling bloated or dull. I’ve struggled with the Hobbit franchise (I love the first film, have come to appreciate the second, and have no idea how I feel about the third) mostly because it’s all just too much of everything. Brett Ratner has essentially made a mid-budget heroic fantasy film that does a lot of the same things as The Hobbit in just 98 minutes. It also doesn’t take itself nearly as seriously as Jackson (or Tolkien’s book, for that matter). Most importantly, Hercules is a whole lot of fun.

My thoughts on this one are basically that I can’t believe Bryan Singer pulled it off. After 11 years away from the X-Universe, during which 20th Century Fox allowed the series to flounder all over the place without a clear direction, Singer returned and managed to somehow make everything fit together in a way that makes sense. What’s more, I care about pretty much every single character in the movie and understand why they’re here and what their motivation is. After Patrick and I podcasted about the movie, I watched all the films in the order that they were released. By the time X-Men: Days of Future Past was over, I had a new appreciation for what Singer and writer Simon Kinberg had accomplished. It’s a crowning achievement that captures the essence of the X-Men, and the budget, effects, and filmmaking leadership of Singer ensure that these mutants have never felt more relevant or human. I was crazy about the X-Men for a really long time, but had cooled on the team over the last few years. X-Men: Days of Future Past reminds me what makes them so amazing and relights the fire I used to have for them. Also, MCAVOY. 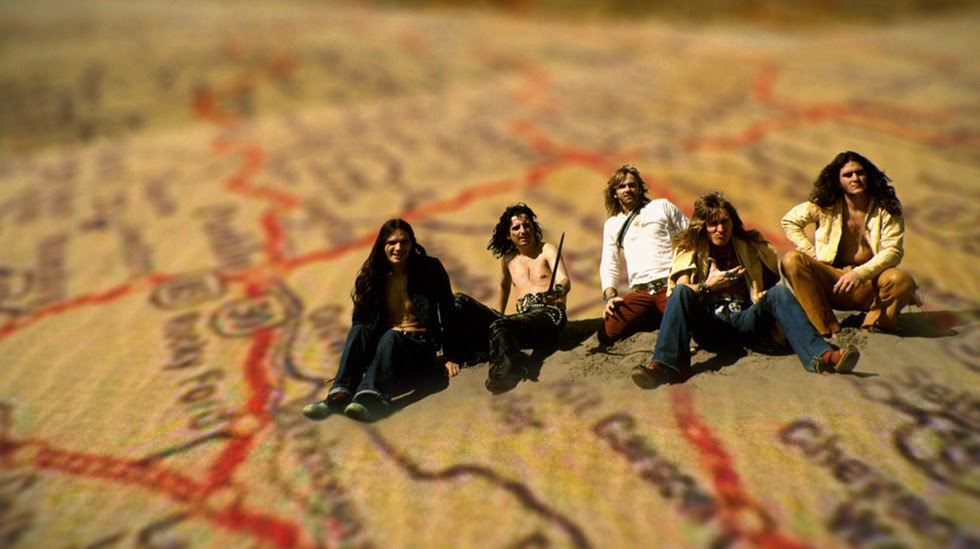 I love Rock Docs and I love Alice Cooper, so lucky for me that this year brought an excellent documentary about the shock rock legend. Debuting at this year’s Tribeca Film Festival, Super Duper Alice Cooper does what so few documentaries do, and that’s let the men who were there and who held the instruments tell the story. There are no friends of the family or assistant sound board technicians to be found. It’s not revisionist history, either, as can often be the case; Cooper is frank, open, and completely honest. No story is sugarcoated or gilded to gloss over missteps and mistakes. It’s a shame that most other rock musicians don’t have the same clarity or humility on hard lessons learned or we’d have more documentaries like this. As it stands, I consider this to be one of my favorites.

3. Dawn of the Planet of the Apes

About a half-hour into Dawn of the Planet of the Apes, I realized that I was more invested in the plight of these apes, which are almost entirely digital creations, than in the human characters I watch in most movies. One scene in particular was full of so much subtlety and subtext that I was convinced it was one of the best performances of the year. Mark Ahn commented recently that the level of digital manipulation that is now possible opens the door to a discussion on what constitutes as acting, and I agree with him. Yet, I can’t deny how impressed and engaged I was with this movie, or how uncomfortable and anxious it made me. Dawn of the Planet of the Apes completely wears me out, and I mean that in the best possible way. 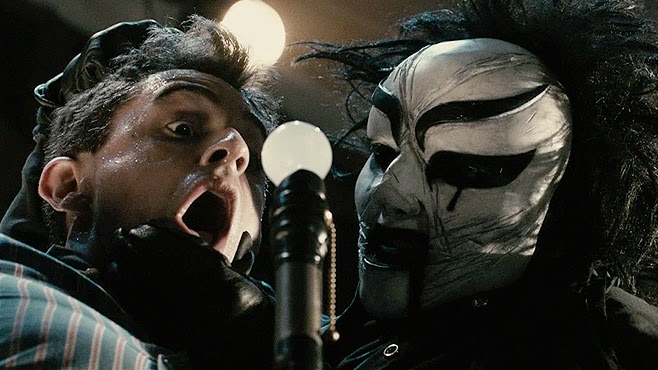 Canada’s best export of 2014, Stage Fright is a movie that not a lot of people seemed to champion (though Patrick certainly did earlier this year), and I just can’t understand the audience failing to connect with this movie. I think it’s delightful and clever and hilarious, and full of songs that I could listen to over and over again. I haven’t enjoyed a musical horror film this much since 2009’s Suck (another Canadian film), but I think I like Stage Fright even more. I read somewhere that some horror fans didn’t think it was scary enough; I think that misses the whole point. It’s not just a horror flick, it’s an entire experience, man! I can’t wrap my head around a movie full of this much passion, humor, and FUN not being accepted by the crowd it’s intended for. I absolutely love it. O, Canada, save a spot or me, I’m coming.

1. Guardians of the Galaxy

At the beginning of 2014, Adam Riske and I had a conversation about 2014’s upcoming movies. I predicted Guardians of the Galaxy would, and I quote, “bomb hard.” Clearly the man who wrote that was suffering from some sort of mental condition and has no business speculating about movies. Ugh. What a jackass. As it turns out, GOTG (that’s what the kids are calling it) is the biggest hit of the year and director James Gunn is now a name that movie audiences everywhere can’t ignore.

GOTG is a movie that I wish had existed when I was younger, because I guarantee you that it would have occupied every waking moment of my free time. I’d be writing fan fiction, doodling The Milano on all my school folders, and annoying all my friends by walking around constantly singing “ooga-chaka, ooga-ooga-ooga-chaka.” Okay, I do all of those things anyway. What amazes me about GOTG is how transcendent it is: it’s based on Marvel comics, but I read some of those comics and they didn’t capture me like the movie did. The movie has transcended the comics, thanks to the vision of James Gunn and the perfect casting. It’s also transcended genre, because it’s not just a sci-fi adventure or a space opera. It’s full of comedy and action and remains grounded and accessible throughout, thanks in large part to the soundtrack and the many touchstones Gunn gives us to latch onto. It’s not for one crowd or one age or one gender; Guardians of the Galaxy is for everyone. It’s tragic and uplifting, breezy but full of weight. GOTG is a fully realized world that I can escape to and forget all my real-life problems for a couple of hours, where the good guys win and the bad guys get what’s coming to them. As clichéd as what I’m about to say is, it’s also the absolute honest truth: this is WHY I go to the movies. I think I’m going to watch it again right now.
Posted by Patrick Bromley at 5:00 AM