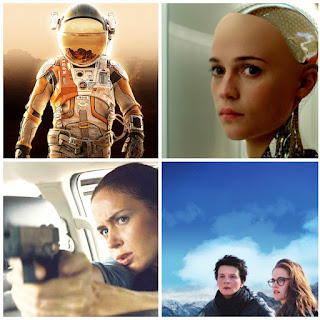 I wanted to do something different with my year end list.

As I was eyeballing my list of what I’d seen in 2015, I noticed that certain of my favorites shared something beyond just genre conventions or character types; it was more a common through-line of ideas or tone or structure. It ended up being fairly difficult to come up with a convenient name for these through-lines, and my list ends up being more than 10, but I liked thinking about these movies and how they might connect with each other, the relationships that I saw between the films of the past twelve months. So, this list won’t be a ranking, but more like small, arbitrary groups of my favorite films. That said, I do have a #1 favorite.

Like excellent furniture, these are polished, mostly well-crafted, and reliably enjoyable

I wish that every movie made could be as good as these, especially since they were aiming for mainstream audiences. Populist entertainment absolutely doesn’t have to mean poorer quality.

The Martian
More enjoyable than just watching smart people do smart things to try and solve an impossible problem was the overall tone of optimism. I wouldn’t say the story was ever lighthearted, but it’s positive and doesn’t wallow in discouragement, choosing instead to buckle down and get to work. I secretly want every science class from 5th grade onward to watch it. I want this movie to be the Top Gun of science, inspiring thousands to join up to be the best. Science! Yeah!

Mission Impossible: Rogue Nation
The best action franchise going right now (Star Wars pending, I suppose). Tom Cruise has become what Legolas was in the Lord of the Rings movies, which is the best special effect in the business. I look forward to his future exploits of shooting arrows at bad guys while surfing elephants on top of a plane. In space. With Dominic Toretto.

Spotlight
More smart people doing smart things well. I think the story of the priest scandal is slightly underrated in terms of its domestic importance in the last 15 years, so I sort of appreciate that this movie, although not strictly a documentary, is bringing that issue back to the forefront. Similar to The Martian, the movie’s strength lies in its driven, competent characters that don’t shy away from getting the work done, and believe that the work itself is good, despite its difficulty.

Star Wars: The Force Awakens
The flaws are obvious on repeat viewings, but the new characters are so great that those flaws aren’t what stick with me. What I’m left with more than anything is a giddy excitement about Star Wars stories that I didn’t think I would ever get back again.

There has a been wider spread in the conversation (this site included) about the disproportionate number of rich female roles; it’s good that more people are not just talking about it but caring about it too. The more voices and perspectives that are allowed in art, the better the art can be. With that said, these movies are not just notable for their female leads, but the quality of these very human stories.

Clouds of Sils Maria
Two women as strong, remote, and alluring as the Alps through which they travel pull and tease each other with the strings of love, hate, youth, age, and desire. Plus, it will probably make you stop disliking Kristen Stewart so much.

Ex Machina
I got duped. I didn’t realize until too late that I wanted this movie to be about something else, some grand statement about humanity. So, upon first viewing, I wanted to dismiss it, but I came back to it multiple times because I wanted to figure out how or why I got duped. I figured out what I missed, and the nature of the central relationship between Ava (Alicia Vikander) and Caleb (Domhnall Gleeson) became much clearer. I’m not sure about a “grand statement,” but the movie’s question about the quality that can define human beings still rattles around in my head.

Inside Out
Although I loved the premise, I was worried that a movie about the interior life of a child would swirl into sentimentality or trite pop psychology. I was delighted to see that it avoided both, instead giving a truthful explanation of the relationship between our emotions and our memory. I’m not sure if this as an explicit aim of the film, but it definitely provided a common language for children and adults to talk about something that is not always easy to talk about.

Phoenix
Heart sick and body broken in post-World War II Germany, a woman (Nina Hoss) tries to put her life back together, but can only get it back if she compromises who she is. Christian Petzold’s movie is a different spin on the subgenre of post-Holocaust stories, capped off by the year’s very best ending.

Trainwreck
What I loved most about Amy Schumer’s performance is that she’s funny in the way that actual people are funny; it’s never just jokes about weight or sex appeal or stereotypes. She’s a complete character: flawed, endearing, obnoxious, kind, and neurotic. What makes the character ring so true is that she is grounded in a romance, where all of the warts and beauty of her personality surface in the most awkward and hilarious ways.

The ones that got away

I tried my hardest, but I lost out on seeing these potentially interesting/critically acclaimed movies. Their absence probably makes my favorites list a little less credible, but based on good word of mouth I am hoping to chase them down soon.
Amy
Anomalisa
Bridge of Spies
Brooklyn
Creed
Kumiko, the Treasure Hunter
The Look of Silence
Room
Tangerine

The Hateful Eight
The detractors bring up the complaints that are familiar to Tarantino’s movies: unnecessary violence, a meandering narrative, overindulgence in nostalgia. But, that’s what I love about it! I love watching a bunch of villains (not real villains, Tarantino-style villains) bump into each other and have annoyance turn into indignation and then into retribution: messy, messy retribution. And although I understand the complaints about the story being aimless, I think the movie has something to say about how we deal with the smallest slights and snubs.

Sicario
Denis Villeneuve is on the shortlist of directors whose names are synonymous with quality and intriguing stories. He makes movies for adults, never shortchanging the audience on its ability to handle the discomfort of ambiguity or harshness of perspective. We follow our main character (Emily Blunt) as she descends into the hell of the drug war, and feel the dread that accompanies her discovery of the ultimate purpose of that war.

Mad Max: Fury Road
How can one movie contain so many parts that I love? Rich visual storytelling. A score worthy of the apocalypse. The practical effects. The meticulously considered additions and extensions to an already established world. A kickass, tough, but totally humane female character who doesn’t delight in violence but will use it to defend what she believes is right (and what name is more badass than Imperator Furiosa?). All of this in a dystopian science fiction package that still speaks into our own modern concerns. George Miller, you sweet Australian genius, thank you, for the most cinematic movie of the year.
Posted by Patrick Bromley at 5:00 AM