TERROR IN THE AISLES at 35 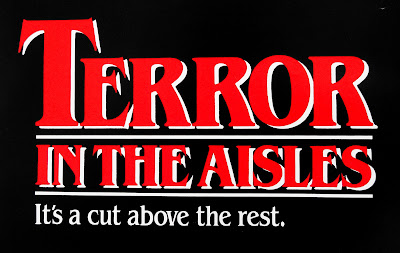 I can’t remember the name of it, but I can tell you exactly what it looked like, or I might be conflating it with other small-town Mom ‘n’ Pop video stores, they all looked the same then. A tiny little place, with just two aisles, not much in the way of foreign or “art” films, and a curtained off area in the back ominously marked “NO ONE UNDER 18 PERMITTED.”

Mine was in Ventnor, New Jersey, a few blocks from my grandparents’ house. My grandfather rarely rented movies--he was an inveterate recorder, to the point where he kept a pen and paper spreadsheet mapping out everything he planned to tape in a given week. His membership card for the local video store existed mostly so I could use it, renting some nonsense that no one else in the house would watch with me except my uncle on occasion, quality programming like Humanoids From the Deep or Tourist Trap.

Terror in the Aisles fell under my radar when it was released in theaters in October of 1984 (though, to be fair, it fell under most people’s radars, because it opened against The Terminator the same weekend). Its stark white and red against black box cover art immediately caught my eye when it was released to home video the following summer. I rented it, and then a couple weeks later I rented it again, and then I kept on renting it, several times over the entire year. I was thirteen, and proclaimed myself to be a horror fanatic, but Terror in the Aisles showed me that I had barely scratched the surface. It was released at a time when Hollywood was feeling particularly, uh, self-congratulatory, resulting in several clips-driven movies solely about how great movies are, including That’s Entertainment, That’s Entertainment Part II, and That’s Dancing. Terror in the Aisles was actually the third of three documentaries devoted to horror movies, after 1982’s Coming Soon and It Came From Hollywood. While the two earlier films focused largely on horror/sci-fi made during the 1950s and earlier, Terror in the Aisles was devoted mostly to contemporary (for the time at least) releases, a couple of which, including Videodrome and Firestarter, had barely left theaters before being included in it. 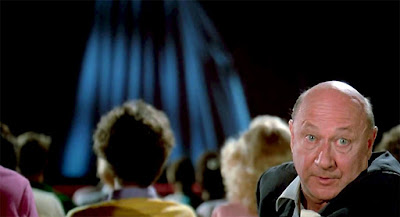 Hosted by Donald Pleasence and Nancy Allen, they have some fun with their assignment, watching and commenting on the films from inside a theater (“Get him!” Pleasance yells at one point, when Michael Myers pops up from behind the couch in Halloween). The theater has that cramped, seedy look of a lot of 80s one-screener movie theaters, where you could watch Halloween II, then stick around until midnight for a screening of Women’s Prison Massacre. None of their observations are particularly groundbreaking -- we enjoy horror movies because we like to be scared, you’re most vulnerable when you’re naked, etc. -- but, as with the recent crowdfunded documentary In Search of Darkness, both Pleasence and Allen at least feign having an appreciation for horror, rather than approaching it from a detached “it’s not for me but I guess some people enjoy this kind of thing” point of view.

Upon rewatching Terror in the Aisles as an adult, it becomes far more noticeable that, for dedicated horror aficionados, it barely rates as any sort of primer on essential films in the genre. There’s nothing at all mentioned about giallo, Hammer horror, or anything at all made outside of North America. At no point does it ever really explore the history of horror, and such genre icons as Vincent Price, Bela Lugosi, and Lon Chaney are barely seen, let alone acknowledged. What does get mentioned, curiously, are decidedly non-horror films such as Klute, Marathon Man, and, most puzzlingly, Nighthawks and Vice Squad. Of the two, Vice Squad has the tiniest bit of grounds to argue that it qualifies as a horror movie, thanks largely to its villain, a murderous pimp hilariously named Ramrod (Wings Hauser). Like Jason Voorhees and Michael Myers, Ramrod has to be killed a couple of times before he finally stays dead, but other than that, it’s a standard, albeit gruesome, crime thriller about life in the mean streets of Los Angeles. It’s unclear why he and Rutger Hauer’s international terrorist Wulfgar in Nighthawks were both offered up as the ultimate in horror movie villains, as opposed to, say, Reverend Harry Powell in Night of the Hunter, a film which far more qualifies as horror, and yet isn’t mentioned at all. 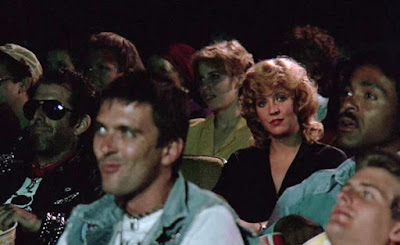 Nevertheless, as basic Beginning Horror 101, you could do worse. All the popular hits are there (Psycho, Friday the 13th, The Texas Chainsaw Massacre), balanced with stuff that had already been forgotten by 1984, let alone now (Nightwing, Saturday the 14th), and “sure, why the hell not” oddities like Midnight Express and Ms. 45, Abel Ferrara’s rape revenge thriller, and the only featured film that, even well into middle age, I still haven’t been able to bring myself to watch. You’re not going to win any high level trivia contests with what you see in Terror in the Aisles, but if you happen to find yourself making small talk with a stranger specifically about American horror movies released between 1970 and 1982, you’re in luck. 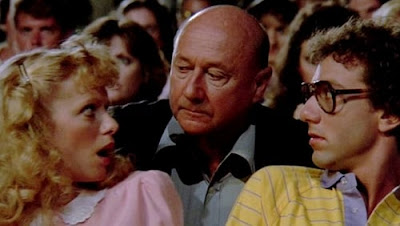 Mostly, it’s a nice little Capri Sun and Bugles flavored dose of nostalgia, both for the '80s and when you were a teenager and you wanted to feel in the know about things, especially things that other people might think were a little too weird for them. Between that and reading Fangoria, it was the first time I felt like an “expert” on something, even if, unbeknownst to me at the time, the holes in my knowledge were so large a xenomorph could have climbed through them. While Terror in the Aisles may feel a little slipshod and incomplete, it certainly sent its viewers scrambling back to their local video stores, or scanning the listings in TV Guide for any mention of the phrase “graphic violence.” It was a gateway drug, and the door to a whole new, occasionally bloody and slimy world, one that today is more active and vital than ever before. Terror in the Aisles walked so that horror podcasts could run.
Posted by Patrick Bromley at 5:00 AM