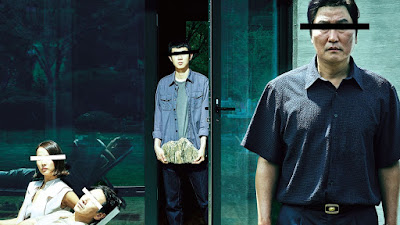 Nearly every film on my favorites list from last year related to or made me empathize with mental health struggles and those suffering through them, and nearly every film on my list for 2019 made me reflect about income inequality, social structures/traditions, and human connection. Does art reflect life? Absolutely. And we are all better humans for it.

Movies I haven’t seen/finished yet at the time of this writing: The Souvenir, The Last Black Man in San Francisco, A Hidden Life

Movies that probably were on the list or in some sort of three-way tie as recently as yesterday until I tried to really rein myself in: Horror Noire, Midsommar, Portrait of a Lady on Fire, Little Women, Dark Waters, Atlantics, Pain & Glory, The Farewell, Daniel Isn't Real, Doctor Sleep, John Wick 3, All That We Destroy, Hail Satan?, American Factory, Satanic Panic, Brittany Runs a Marathon, Booksmart 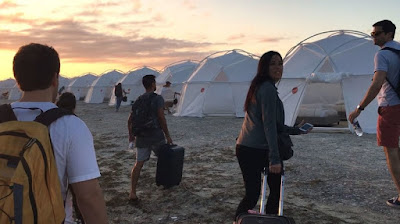 These are not necessarily the best documentaries of the year. I probably liked Hail Satan? more, appreciated Horror Noire more, was impacted by American Factory more… you get the picture. But with the exception of Hail Satan?, no documentary from 2019 had me talking to the screen (excitedly and rapidly!) or dropping my jaw in shock and awe as much as these. The news cycle moves SOOO quickly now; no one is talking about these anymore, and that’s a shame. Greed, lies, social media hype, the desire to feel “cool” or accepted, more greed... There are LESSONS here, people, and we need to learn them! 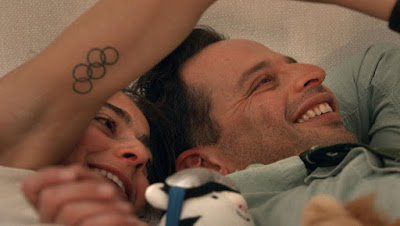 I really wanted to include Olympic Dreams here for the simple fact that I wish more people had seen this movie. It’s so small -- and I mean that in a good way. Maybe I should say focused: Alexi Pappas, an actual Olympic athlete, co-wrote and stars in the film that was completely shot during the 2018 Winter Olympics in Pyeongchang, South Korea. I love that this movie shows the viewers parts of the Olympics that are rarely seen outside of the athletes living and competing there. The setting alone was so interesting and compelling, but now add the allure of the Olympic Village the sweetness of a story that reminds us that loneliness is real, the importance of human connection cannot be denied, and sometimes it just takes one kindred spirit to remind us of who we are. 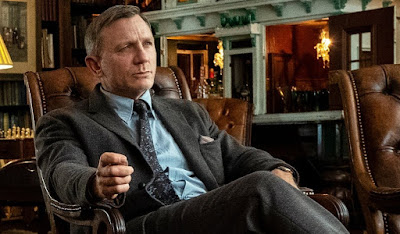 I’ve seen it three times so far, and it just gets more entertaining despite knowing how it all comes together. Rian Johnson made a Clue for our modern era (era), and I can’t get enough. The performances, the writing, the aesthetic -- all the pieces fit perfectly here. It’s been fun introducing this film to friends and neighbors; in fact, it might be the only film on this list that is getting my movie-liking (notice I did not use the word ‘loving’) friends out to the theaters! My students are seeing this film too (most haven’t even heard of half the other titles mentioned on this page), and it’s exciting to celebrate a film that’s reaching a wide, diverse audience. Also, Chris Evans’ sweater. 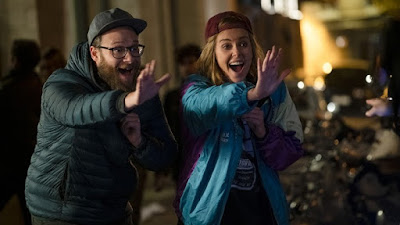 I was excited to see Long Shot back in May, but I certainly didn’t go into the screening thinking I’d leave with the start of my “best of” list for the year. This movie is clever and sharp and way more relatable than I expected it to be. It’s romantic, funny, smart, and endearing. It feels fresh. It uses Roxette’s “It Must Have Been Love” in the best way since Pretty Woman. What more can we ask for from a romantic comedy?

6. Dolemite is My Name 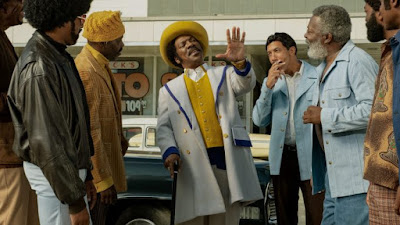 I’m a sucker for movies about making movies (see #4), and my affection for Eddie Murphy in a role like this, playing Rudy Ray Moore with effervescent joy and sincerity, makes me an easy mark. This is the only film on my list that I want to watch again RIGHT NOW in the same way you want to listen to your favorite song on repeat. It’s a film version of music to my ears. (I love what Adam and Rob say about it here, too.) 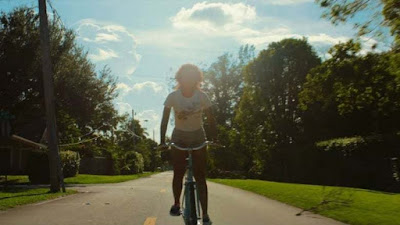 This film is beautiful in myriad ways, but certain parts are so difficult (coming-of-age issues, family issues, societal issues, other related things that would be spoilers) that I almost had to turn it off. We all have particular emotional responses based on our invisible genetics, where/how we were raised, life experiences, etc. As a person who is inherently empathetic (sometimes to a fault, so I’m not saying that to pat myself on the back), I put myself into any character’s shoes VERY easily, even if and when that character is fairly different from who I am (Patrick and I often say that I “feel it all”). As a person who has worked daily with teenagers for 20 years (more if we count, you know, being a teenager), I especially feel the struggles and triumphs of young people. All that said, Waves took me on an emotional roller coaster ride that made me feel each and every character’s pain and position while (spoiler here… very small but skip ahead if you want) eventually turning that introspection on life inward and had me reviewing and rethinking my own severed relationship with my dad, who passed away in 2008. The sweet, genuine romance and connection in the film also reminded me of how, despite our human desire to be independent (I often crave “alone time”), the old adage is true: no person is an island. We need each other to get through this life. We need each other to make all of the suffering worth it. Relationships -- of all kinds -- help bring the sun out even when the clouds seemed to have grown too dark. 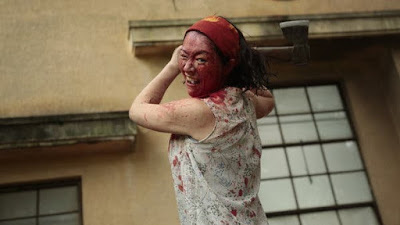 We saw this very, very early in 2019, and honestly, that often means my brain has been filled with a million other movies/songs/books/essays to grade/kids to parent or teach/appointments/life things since then, rendering my memory almost useless. THIS movie, however, stuck with me in a way that many didn’t. I think back to it for the sheer fun of it all -- how each twist and turn was a surprise that served the story and the filmmaking. This is the type of movie that pleases on a visceral level and on that simple entertainment level (that some people seem to only want), and I think I could watch it 100 times and get something new out of it each time. If you are a movie lover (and a lover of shock, gore, zombies), there’s no way this movie won’t charm the heck out of you. 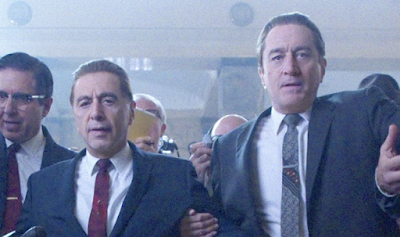 Listen. I tried. I really, really tried. I’m known for not being able to make movie decisions easily (or most decisions easily!), and I hate leaving anyone or anything out… OF ANYTHING. But this is NOT the case here. My top three favorite films are simply that: the three I couldn’t stop thinking about, couldn’t stop wanting to live in, couldn’t stop hearing on repeat in my head. They are the films that resonated the most, made me want to keep watching movies the most, and made me think about life and the human condition the most. (Side note: they also made me cry the most? That is not a defining factor when coming up with my favorites list, because as has been mentioned MANY times before by my sweet, adoring husband Patrick, I cried in the theater when we saw EIGHT CRAZY NIGHTS… and that movie didn’t come anywhere near my Top Ten or Favorites list for that year. But cry I did during my top three films: happy movie love and Tarantino nostalgia and wishing I had lived during the time period of Once Upon A Time In Hollywood; overjoyed filmmaking achievement and lamenting the many inequalities humans face (and the overall state of the world right now) for Parasite; emotional everything during, after, and repeatedly after for months now for The Irishman. Do you want me to cry in the middle of Christmas Eve dinner with 30 people at my house? Ask me about De Niro playing Frank “The Irishman” Sheeran and wanting to leave his door open at the end of the movie. [I just started crying again.])

Parasite, OUATIH, and The Irishman gave me a gift. They are slowly teaching me to deal with the immense grief I will have when my favorite director decides to stop making movies or worse, is no longer with us to make them. They encourage me to gratefully reflect on a lifetime of movies that have changed my life in so many positive ways (example: Goodfellas is one of my all-time favorite movies) and to re-discover some of the actors who have changed my life (example: Robert De Niro is one of my all-time favorite actors).

No one knows what’s next. Do we wake up tomorrow? Does tragedy strike? Do we make a terrible choice and fall off our paths? Do we do something unexpectedly wonderful and get back on track?

I was thinking about these things before, during, and after my viewing of Martin Scorsese’s sprawling epic, a movie that gutted me in so many ways. Life, death, and everything we experience in between -- man, what a gift. But it’s a gift that humans know how to screw up in countless ways, and when the mistakes are as grave as the ones that, for example, Frank Sheeran made (one could argue that he didn’t necessarily see them as mistakes), they cause the deepest, most permanent type of regret and pain in a conscious, feeling, thinking human. (Wouldn’t it be wonderful if we could rewrite the endings of tragedies and get rid of the bad guys with a flame-thrower?) We don’t have to empathize with Scorsese’s characters, for instance, as they are often awful, disreputable people. But -- and here is what Scorsese and so many of the best storytellers know -- we often can see past their horrid mistakes/behaviors to find some piece of humanity or emotion that we connect with in even the tiniest of ways… and we still do empathize with them. Or maybe that’s me trying to see some good in everyone. If one of my gifts as a human navigating this wild, unpredictable world is that I try to see the good in everyone, I can live with that. And movies, this year more than ever, have helped remind me that there’s something positive to take from everything, and second chances should not be taken for granted. The good, the bad, and the ugly: we are here for it all, together.
Posted by Patrick Bromley at 5:00 AM