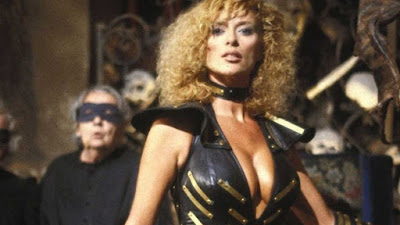 The review duo who howl at the moon.

Adam: This week, we’re not only chatting about a few werewolf movies each of us watched this week but also the subgenre in general, which I think has a strong track record. There are a lot of solid werewolf movies. Before we get into which ones we’ve been watching, do you have a favorite werewolf movie, Rob?

My favorite is John Landis’ An American Werewolf in London, which began as a movie I was afraid of as a kid (I didn’t understand why the sad final shot went right into a happy song over the end credits, decaying Griffin Dunne, etc.) but have grown to really love over the years. It’s a perfect blending of horror and comedy with the film being a terrific example of each. The key is that the central relationship between David Naughton and Jenny Agutter is sweet because you really care about the characters and don’t want their romance to be doomed for tragedy. It also has the best werewolf transformation sequence ever put on film.

Rob: Before I get to my answer, I need to give everyone a peek behind the curtain. Adam is obviously the brains behind Reserved Seating. That won’t surprise any of you reading this. All the best gimmicks and series ideas are his, and I’m just along for the ride. But any Reserved Seating fans out there really need to know that the elegance of his genius is sometimes in its simplicity. To wit: In the middle of last week’s Scary Movie Month column idea brainstorming session, Adam simply texted me, “Wanna just talk about werewolves?” Of course I do! 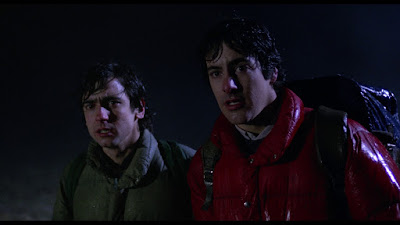 Anyway, I honestly don’t know that I have a favorite werewolf movie. An American Werewolf in London would certainly earn any list’s top spot. I love George Waggner’s original Universal classic, The Wolf Man. One new-to-me title that I’ll reveal in a minute numbers among my favorites, for sure. I definitely like cinematic werewolves. But for me, they’re kind of like The Incredible Hulk: They’re a character archetype I like in supporting roles or as part of ensembles, but less so in solo adventures. I certainly haven’t seen every werewolf movie (nor would I claim to be an expert on the subgenre even if I had), but I’ve always found that the central metaphor of “controlling hormonal/emotional” rage is best when it’s not stretched too thin. I love the way werewolves are used in What We Do In The Shadows, for example, or on Buffy The Vampire Slayer. Honestly, I think almost any monster archetype is stronger when it’s adding a layer to a larger story.

Adam: I love the tragedy element of werewolf movies. It’s usually a normal, decent person who has a terrible thing happen to them and they carry an undeserved burden as a result. It’s very relatable to anyone for any number of reasons in their own life. To me, if I’m using a comparison to sports movies, werewolf movies have a strong track record for solid entries similar to football or boxing movies in their respective subgenres.

Adam: For this week’s column, we each watched a few werewolf movies. I started with a rewatch of The Howling, which I hadn’t seen for a long time and my opinion is pretty much the same: it’s ok. I prefer most other Joe Dante movies to The Howling. It’s weird because I don’t think the movie does anything poorly exactly, but it doesn’t really connect with me either. Maybe I’m just not a Dee Wallace guy. Robert Picardo didn’t scare me as much as he did on the first viewing, so that’s progress. When I first watched The Howling, the whole opening sequence with the adult shops and Picardo lingering in the dark as a wolfman really freaked me out. It felt like Cruising.

Rob: It’s been a few years since I’ve seen The Howling, but my memory is that it reminded me of Patrick’s review The Omen: It’s exactly what I thought it would be. That’s not a knock on it, at all. Joe Dante rules! But the truth is that there are just some movies that we get to entirely too late in life, and that was my experience with The Howling. Creepshow was that for me, too. I liked it a lot when I watched it for the first time as an adult, but I can see how much more formative it would have been had I seen it as a kid. Still, I’d gladly watch The Howling (or Creepshow) any time. 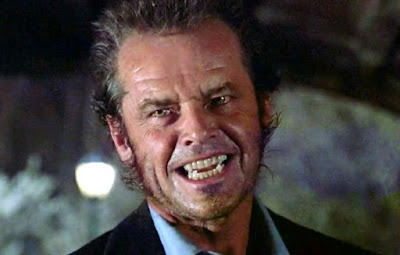 Adam: Next up was Mike Nichols’ 1994 werewolf drama Wolf with Jack Nicholson, Michelle Pfeiffer, and James Spader. This was my first viewing of the film since 1995 on VHS and I really didn’t like it back then as a middle schooler. As an adult, I enjoyed the movie quite a bit more. It’s an engaging workplace film set in the world of publishing first and foremost and the werewolf elements almost feel like an added bonus. The supporting cast is really stellar too, including Kate Nelligan, Christopher Plummer, Richard Jenkins, Ron Rifkin, and David Hyde Pierce. I’m noticing I’m a mark for the classy horror films of the early ‘90s (such as Bram Stoker’s Dracula, Mary Shelley’s Frankenstein, and Interview with the Vampire) that were almost made to appeal directly to grown ups who didn’t like horror movies. They’re all immaculately made from a production standpoint, which makes them fun to watch even when they have a weak pulse.

Rob: I really wanted to get to Wolf before we wrote this column, but I ran out of time. I’ll definitely be watching it this month, though. I didn’t even know it existed until you mentioned that you were watching it.

Adam: Lastly, I finally got around to seeing Ginger Snaps. I put this one off for a long time for no real reason and I’m glad I finally saw it. It’s very gooey and very Canadian. At times, Ginger Snaps reminded me of the movie May (one of my favorite horror movies of the 2000s) in that it takes a familiar premise and really pushes the envelope with it. Ginger Snaps really goes for the jugular with its premise. I was kept at a distance from the movie as a whole, unfortunately. I just didn’t connect with the characters all that much, but maybe I’ll get used to them more on a second viewing. It felt like there was a lot of meat still left on the bone with this one after one viewing. A movie like Ginger Snaps, even if for me not entirely successful, represents the spirit of independent horror at its best, which is a singular vision told with passion and care.

What werewolf movies did you watch this past week?

Rob: I also watched Ginger Snaps for the first time, which is a movie I’ve heard talked about with significant reverence for years. I think I enjoyed the characters a bit more than you did, actually. Maybe it’s because I work with adolescents? I like that it pitches the typically-male werewolf mythos toward the feminine with a nice drizzle of early 2000s goth angst. Aesthetically, the film is very, very much of its time, which would have been a distraction had the thematics and characterization not been so strong. I appreciated that Fawcett and Karen Walton’s screenplay leans right into the menstruation/female sexual awakening angle without any pretense; it’s not trying to mask its allegory in any way, and it’s not losing any ground trying to outsmart (or “out-Art”) the audience. I liked that it was a sibling story, as well, one about the hazards of outgrowing family dynamics and developing as individuals. I’ll definitely come back to this one in the future. 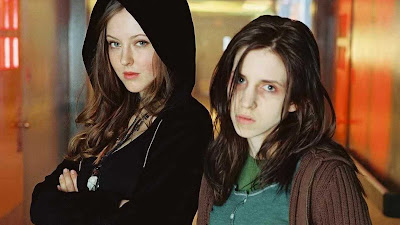 I also watched Howling II: Your Sister is A Werewolf for the first time. It’s...an adventure. When I saw “Based on the novel by Gary Brandner” in the credits, I became positive that my English degree would be worthless until I incorporated that book into my personal canon. What can I really say? There are plenty of horror scholars out there who can get into its genre quirks and joys with much greater authority than I (and extol with more professionalism on the merits of Sybil Danning’s wardrobe), but I’ll just say that it’s an insane movie with a trashy, punk rock vibe that I couldn’t help but appreciate in this post-Verotika age of ours. I also think Christopher Lee should have done an entire series of Paranormal Private Eye movies. We really missed out.

Adam: One of my favorite tidbits from the In Search of Darkness documentary was when Joe Dante said Christopher Lee personally apologized to him for appearing in Howling II. I saw the movie once late at night at a horror marathon and it played well under those circumstances. I’m due for a revisit.

Wolf Talk: Say you were bitten by a wolf and slowly turning into a werewolf, how do you think you would handle the situation?

My first impulse would be to move out of town to not put my loved ones at risk. I think I would have fun developing my wolf powers prior to going full-blown evil. I definitely wouldn’t tie myself up because I’m bad at tying more than a shoe. I’d be too embarrassed to ask for help. I’d probably just social distance and hope for the best.

Rob: If we’re assuming that the werewolf bite would invariably lead to me going full wolf and losing my humanity forever (as opposed to just going wolf during full moons, etc.), and assuming that I’m the only one bitten and have no co-victim to go out all “Riley-in-The-Last-of-Us-poetic” with (Sorry for the video game reference), then I envision myself saying goodbye to my loved ones, booking a hotel room, and locking myself down in front of the TV for a few final movies before drifting off into the great beyond. Maybe I’ll order a pizza, too? I’m not complicated. I’m not going to try to go scale Everest before I die, or anything. My sincere apologies to the hotel staff who have to deal with me after I turn. Then again, I’m sure you’ve all dealt with worse. Have fun taking me out.

Anything else on werewolves?

Adam: Just a shout-out for people to watch Bad Moon. I love that movie. It’s slowly becoming one of my all-time favorites of the genre.

Rob: We’ll be back next week with more Scary Movie Month goodness. Until next time…