Start off your Spring right with these double features!

Double Feature 1:
Adam: #1: Bad Company (2002)
Patrick: #2: Bad Company (1995)
Patrick: Trailers/Shorts: Gladiator (1992), Gladiator (2000), Twilight (1998), Twilight (2008), Crash (1997), Crash (2005)
Patrick: Theme: Homophones
Patrick: I’ll be honest: I don’t think this would be a great night at the movies for us. I don’t love the Joel Schumacher Bad Company, though I do kind of like the Laurence Fishburne one from 1995. Who are the Ellen Barkins of today? There are none.
Adam: This is a fun theme! I’ve managed to skip Bad Company (2002) until now, but it’s on my list of unseen movies from 2002 to catch up with this year since it’s celebrating a 20-year anniversary. I was selfishly looking for a movie to pair it with. Now I just want to do that Gladiator double instead. I remember seeing Bad Company (1995) on video but being too young to understand what was happening. Ellen Barkins of today??? Yeah…none come to mind. That’s a problem.

Double Feature 2:
Patrick: #1: My Man Godfrey (1936)
Adam: #2: Den of Thieves (2018)
Adam: Trailers/Shorts: Jimmy Butler Bulls career highlights, Lee Daniels’ The Butler, The Remains of the Day, Alfred scenes from Batman (1989), Olympus Has Fallen, London Has Fallen, Angel Has Fallen
Adam: Theme: Butlers!
Adam: I want to see a theater full of butlers taking a night off to come see this double feature. It’s admittedly silly, but mixing William Powell with Den of Thieves promises to be a fun night at the movies even if it’s tonally a catastrophe. Would you rather see Gerard Butler as the lead in My Man Godfrey or William Powell as Big Nick in Den of Thieves?
Patrick: This is pretty hilarious, and while I have no idea if these two movies will actually play together, I could totally see myself being in the mood to watch them. To answer your question, I’d much rather see William Powell in just about anything, including any of Gerard Butler’s movies. Except maybe 300. Or maybe 300 most of all? 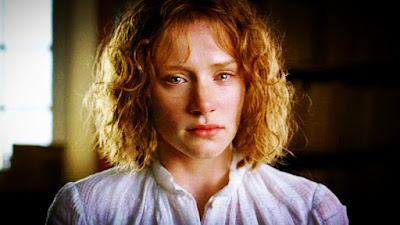 Adam: #1: The Village (2004)
Patrick: #2: Terminator Salvation (2009)
Patrick: Trailers/Shorts: Rocketman, Hereafter, Black Mirror episode “Nosedive,” Jurassic World Fallen Kingdom
Patrick: Theme: I Heart BDH
Patrick: I really, really like Bryce Dallas Howard. I’m glad she’s having so much success as a director in the Star Wars universe because it was actually kind of hard to find a second movie of hers that I would want to watch with The Village (which is my favorite of her performances). She’s a really good actor who’s in a lot of bad stuff. I want better for her.
Adam: I do too. I’ve been meaning to re-watch The Village for a while (...been awhile). I forgot she’s in Terminator Salvation. The trailer block is exciting. This would be my first Black Mirror episode!

Double Feature 4:
Patrick: #1: Masters of the Universe (1987)
Adam: #2: Superman IV: The Quest for Peace (1987)
Adam: Trailers/Shorts: Spaceballs, Harry and the Hendersons, Batteries Not Included, The Chipmunk Adventure, Adventures in Babysitting
Adam: Theme: Movies Adam Saw in Theaters in 1987
Adam: When I went back and looked at Box Office Mojo, I was surprised how many movies I remember seeing in theaters at age 5 (which I was in 1987). I’ll never forget how excited I was to see Batteries Not Included solely because it was my first sneak preview. I programmed Masters of the Universe with Superman IV because they’re both Cannon and feel of a piece. I don’t like Superman IV (why would I?) but love Masters of the Universe so maybe the Man of Steel would benefit from this placement??
Patrick: I saw all of these in theaters too, except for Adventures in Babysitting. It helps that ‘87 was the year that the second run theater near my house re-opened, allowing me to see some stuff I might not have otherwise. I don’t like Superman IV much either, but I suspect this would be a blast. 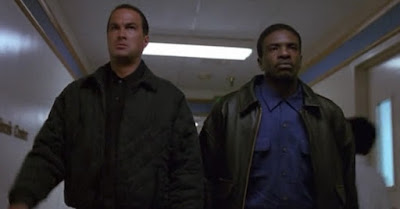 Adam: #1: Code of Silence (1985)
Patrick: #2: Marked for Death (1990)
Patrick: Trailers/Shorts: Rapid Fire, The Untouchables, Running Scared (1986)
Patrick: Theme: Windy City Heat
Patrick: I love this night at the movies. I love these movies, I love the trailers, love the whole thing. Code of Silence is inarguably the best Chuck Norris movie and Marked for Death is Top 5 Seagal.
Adam: This looks like a blast. I need to see Code of Silence and am always down for watching Marked for Death again. I might have an Andrew Davis day soon since I need to see The Package, Steal Big Steal Little (Two Andy Garcias!), and Collateral Damage as well. Bonus points for the Chicago theme. We need to find a way to get movies filmed here again. My Top 5 Seagal: Under Siege, Fire Down Below, Out for Justice, Exit Wounds, Marked for Death. You?
Patrick: Oh, that’s tough. Right now, I’m thinking Out for Justice, Marked for Death, Under Siege, Pistol Whipped, and probably Exit Wounds? Maybe Hard to Kill. Maybe Urban Justice. I can’t decide.

Double Feature 6:
Patrick: #1: Lake Placid (1999)
Adam: #2: The River Wild (1994)
Adam: Trailers/Shorts: Waterworld, Deep Blue Sea, Speed 2: Cruise Control, Hard Rain
Adam: Theme: Thrills on the Water
Adam: Thank you for giving me an excuse to program The River Wild, a movie I adore for some reason. Watching it with Lake Placid would be a lot of fun. Speaking of alottafun, I had to put in that Speed 2 trailer for my man Willem. You know how Alamo Drafthouse does screenings (like Jaws) in the water sometimes as events? We should do that and book Lake Placid/The River Wild in a wave pool!
Patrick: I’m down for that, but I would insist we swap out Lake Placid with Waterworld because we are the two biggest fans of that movie. I’ve never seen The River Wild! Please still be my friend. 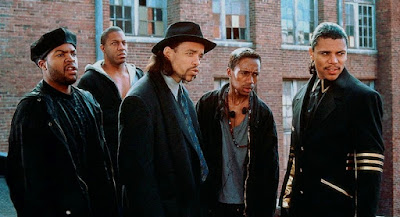 Adam: #1: Hard Boiled (1992)
Patrick: #2: Trespass (1992)
Patrick: Trailers/Shorts: Reservoir Dogs, Diggstown, Juice, Deep Cover
Patrick: Theme: Kick Ass ‘92
Patrick: I don’t know. 1992 kicked ass.
Adam: Here’s another one I selfishly put on here because I’m about to watch Hard Boiled for the first time and wanted something to pair it with. Man, 1992 really did kick ass when it came to cinema, didn’t it? I love Trespass. It has that good Art Evans.

Double Feature 8:
Patrick: #1: The Quick and the Dead (1995)
Adam: #2: Wild Bill (1995)
Adam: Trailers/Shorts: Tall Tale, Last of the Dogmen, Dead Man
Adam: Theme: Western ‘95
Adam: I have a lot of fondness for ‘90s Westerns since Dances with Wolves and Unforgiven (and An American Tail: Fievel Goes West) were how I was introduced to the genre. I’ve always been a defender of The Quick and the Dead, which is a movie that’s underrated and rules (podcast???). I’ve been meaning to see Wild Bill but never have gotten around to it. I know it’s not essential Walter Hill, but any Walter Hill is typically better than no Walter Hill.
Patrick: Your description of Wild Bill is pretty spot on. I like it but it’s in the lower half of my Walter Hill rankings. Maybe I’m due for a revisit? The Quick and the Dead does rule and we can podcast it anytime. 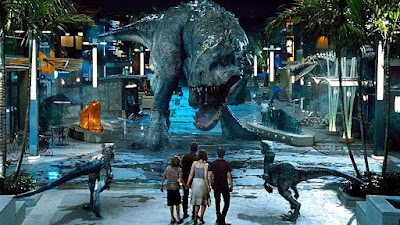 Adam: #1: Jurassic World (2015)
Patrick: #2: The Color of Money (1986)
Patrick: Trailers/Shorts: Star Wars: The Force Awakens (2015), Doctor Sleep (2019), Blade Runner 2049 (2017)
Patrick: Theme: LegaSequels
Patrick: This is a lazy idea, I know, but I wanted to see how Color of Money would play against a modern big-budget blockbuster. Also, this double stopped me from pairing JW with The Village, which would actually be a pretty good night at the movies.
Adam: I’m sorry about flick-blocking your double feature. Is now a good time to say I think The Color of Money might be my least favorite Martin Scorsese movie? And this is coming from a guy who loves that director, the film’s cast, and The Hustler. P.S. Your turnaround on Jurassic World might be one of my favorite stories of 2022. I’m looking forward to our probable Jurassic World: Dominion show this summer even more now.

Double Feature 10:
Patrick: #1: A Simple Plan (1998)
Adam: #2: One False Move (1992)
Adam: Trailers/Shorts: The Man Who Wasn't There, The Ice Harvest, Bad Santa, Bad News Bears
Adam: Theme: Big Bad Billy Bob
Adam: I’m not the biggest fan of Billy Bob Thornton in general (he’s fine) but I couldn’t resist pairing A Simple Plan with One False Move, which are two perfect movies. This double feature is enough to renew my faith in film.
Patrick: One please. If the New Bev doesn’t program this double, we are taking over.
Posted by Patrick Bromley at 5:00 AM