New double features to help you beat the heat!

Double Feature 1:
Adam: #1: Love Jones (1997)
Patrick: #2: High Fidelity (2000)
Patrick: Trailers/Shorts: Return to Me, My Best Friend’s Wedding, Drinking Buddies, About Last Night (1986)
Patrick: Theme: Love in Chicago
Patrick: I love romantic comedies and I love our city, so naturally I’m pretty happy with this double bill. Any of the movies programmed as trailers would slot in nicely as the second feature, too.
Adam: Great theme! I was lamenting on a recent Reserved Seating (where Rob and I covered Running Scared (1986)) about how much I miss movies being filmed in Chicago. It really was a renaissance in the 1980s through 2000. I would see this double feature in a heartbeat.

Double Feature 2:
Patrick: #1: Death Proof (2007)
Adam: #2: Dazed and Confused (1993)
Adam: Trailers/Shorts: “Dancing with Myself” Billy Idol music video directed by Tobe Hooper, Tobe Hooper episode of Perversions of Science, The Texas Chainsaw Massacre (1974), The Texas Chainsaw Massacre 2 (1986)
Adam: Theme: Austin, TX Connection
Adam: This theme was both easy and difficult. It was easy because I love Austin, TX and before I ever went to Austin, I wanted to because of how it was filmed in Death Proof. It was difficult because I wanted to do a Tobe Hooper tribute for you (Tobe Hooper was born in Austin, TX) and program The Texas Chainsaw Massacre after Death Proof but I thought that would be too jarring of a tone shift. Despite being a horror movie, Death Proof ends on a high-note and is such a hangout movie that I felt in my gut Dazed and Confused was the right call for a second feature. Instead, I dedicated the trailer block to Mr. Hooper.
Patrick: I appreciate the Tobe tribute! In a perfect world I feel like the features would be switched (it’s my fault for putting Death Proof first), but I’m really excited to see how they play in this order. As you say, the hangout vibe can carry over into Dazed and Confused. This is one of the double features I’m most excited to check out for that reason. 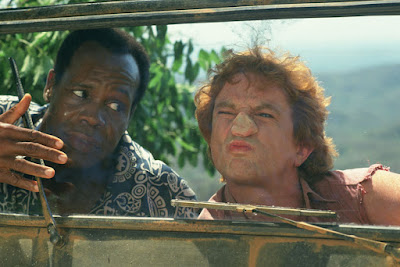 Adam: #1: Troop Beverly Hills (1989)
Patrick: #2: Pure Luck (1991)
Patrick: Trailers/Shorts: Outrageous Fortune, Three Amigos!, Cheers “Pilot,” an episode of The Completely Mental Misadventures of Ed Grimley
Patrick: Theme: The Long and Short of It
Patrick: It’s cheap, I know. I’ve never seen Pure Luck, but our own Rosalie Lewis has said it’s really funny. I spent too many years taking Martin Short for granted. He’s so, so funny.
Adam: I’ve never seen Pure Luck either but have wanted to since 1991! It might be a candidate for one of my “It’s Time” columns. Martin Short is the best. I’ll have Troop Beverly Hills forever in my brain because I had to see it at the dollar theater with my family at least twice, followed by multiple VHS rentals and cable watches.

Double Feature 4:
Patrick: #1: Speechless (1994)
Adam: #2: The American President (1995)
Adam: Trailers/Shorts: Chasing Liberty, First Daughter, Long Shot
Adam: Theme: Romance in Politics
Adam: I’ve wanted to see Speechless for a while but never got around to it. Is it good? It used to be on MGM HD a lot but then Comcast took that channel away because they hate me so much. Pairing Speechless with The American President felt like a no-brainer. The trickier part was finding enough “romance in politics” movies to make a trailer block (most deal with royalty, which wasn’t exactly the theme). I’m glad I remembered Long Shot in the nick of time.
Patrick: Is Speechless good? Probably not. Do I like it? Yes. Geena Davis and Michael Keaton in a romantic comedy about grownups is an easy sell for me. I really like this theme, too. Long Shot is so underappreciated. I wish it didn’t have that stupid masturbation subplot. 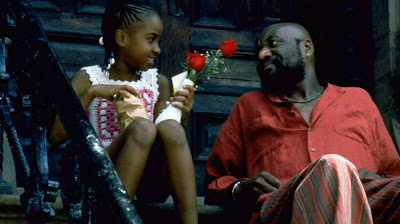 Adam: #1: Crooklyn (1994)
Patrick: #2: Go Fish (1994)
Patrick: Trailers/Shorts: Roger & Me, Clerks, Slacker
Patrick: Theme: Spike, Mike, Slackers, and Dykes
Patrick: I’ve read John Pierson’s book several times, so that’s what immediately came to mind when you programmed what I think is one of Spike Lee’s most underrated movies. Erika loves it and teaches it every year.
Adam: Oh cool. I haven’t read that book yet. I should probably get around to it. I adore Crooklyn too! It’s one of the most underseen/underrated Spike Lee movies and it came out the same day as The Crow! What a time to be alive. I’ve never heard of Go Fish, so I’m happy it’s now on my radar. That’s the perfect kind of second feature for double bills, imho. You hook the people with something familiar and then introduce them to something more obscure.

Double Feature 6:
Patrick: #1: Ghost Dog: Way of the Samurai (1999)
Adam: #2: Crouching Tiger, Hidden Dragon (2000)
Adam: Trailers/Shorts: Before Night Falls, George Washington, Requiem for a Dream
Adam: Theme: Best Feature Nominees at the 2001 Film Independent Spirit Awards
Adam: This is pure nostalgia for me. I was deep into independent film back around this time (I was in college and broadening my moviegoing horizons) and have a lot of fondness for the quirky movies I saw on campus like Ghost Dog. I was going to pair it with another movie I saw at the Fine Arts building (like The Man Who Wasn’t There, Mulholland Drive, etc.), but they weren’t good enough fits. This pairing seemed like the way to go since “elevated” samurai and martial arts movies should pair well together. One thing I always dug about seeing a movie at the Fine Arts building was they only had one projector so after a reel ended you had to wait a couple of minutes and everyone chatted with each other like it was an intermission. It was a unique experience.
Patrick: Is it weird that I haven’t revisited Crouching Tiger since seeing it in theaters in 2000? I really liked it at the time but have never gone back to it. This will give me an opportunity. I love the way both movies play with kung fu conventions, too. Great double. 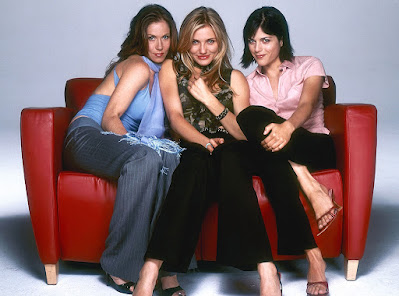 Adam: #1: Anchorman: The Legend of Ron Burgundy (2004)
Patrick: #2: The Sweetest Thing (2002)
Patrick: Trailers/Shorts: Going the Distance, The Big Hit, Friends episode “The One Where Rachel’s Sister Babysits”
Patrick: Theme: Christina Applegate, Scene-Stealer
Patrick: You and I were recently talking about how sneaky good Christina Applegate is even in bad movies, which inspired this double feature. It’s too bad she later became relegated to playing “wife” in movies like Hall Pass and Vacation. She still makes the most of her roles, but she deserves better.

Adam: I was surprised that I ended up liking The Sweetest Thing by the end of it (make no mistake, it’s a bad movie) and a large part of that was due to the super-game performance by Christina Applegate. I took her for granted for a long time because she always seemed to be stuck playing grouches as much as wives. She’s terrific. My last therapist vaguely looked like her which I’m sure is 10% the reason I kept going despite it not really helping me. Hopefully she’ll stop by the theater for a Q&A (Christina Applegate, not my therapist).

Double Feature 8:
Patrick: #1: Hell Up in Harlem (1973)
Adam: #2: Black Caesar (1973)
Adam: Trailers/Shorts: Coffy, Scream Blacula Scream, Slaughter’s Big Rip-Off
Adam: Theme: AIP Blaxploitation Yearbook - 1973
Adam: I love AIP and I love Blaxploitation movies so this might be the double feature I’d want to watch first. I chose Black Caesar because it was AIP’s first Blaxploitation movie release of 1973 and Hell Up in Harlem was the last. Bookends, baby! The trailer block for this should be really fun too. Have you seen all of these? Which do you recommend? I’ve only seen Coffy, which is awesome btw.

Patrick: I haven’t seen Slaughter’s Big Rip-Off (or its predecessor, Slaughter, for that matter), but everything else in this lineup is gold. We might have to switch the lineup because Hell Up in Harlem is a sequel to Black Caesar, but I would love to double both movies right in a row.
Adam: I’m dumb. Anyways, if we leave it as is, maybe it will play like The Godfather Part II??? 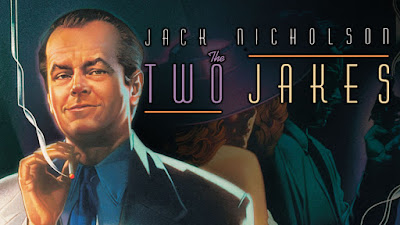 Adam: #1: Chinatown (1974)
Patrick: #2: The Two Jakes (1990)
Patrick: Trailers/Shorts: The Last Picture Show, Texasville, The Hustler, The Color of Money
Patrick: Theme: Legasequels
Patrick: I’ve only seen The Two Jakes once and it was fairly recently. I liked it but I feel like it would play even better in direct connection to Chinatown. I know this seems like a lazy theme and I’m sorry for that, but I couldn’t think of a movie I’d want to watch more after Chinatown than that one.

Adam: The Two Jakes is a movie I was fascinated by as a kid and bookmarked in my brain that I would need to watch one day (because it was a year after Batman and The Two Jakes has a cool poster). I’m on a Robert Evans movie kick because of The Offer on Paramount Plus. They name drop Chinatown a lot, which has made me want to revisit it. What better way to do that than by finally also seeing The Two Jakes! This is a really great theme too because you chose older, less obvious legacy sequels.

Adam: I’m so curious about Rob Zombie’s Munsters movie coming out later this year, which sort of inversely inspired this theme to celebrate the men who played Herman Munster: Jeff Daniel Phillips and Fred Gwynne. Luckily, it worked out with the double feature programming, too, because I think The Lords of Salem and Pet Sematary would play well together. It’ll be a real night of gloomy fun!

Patrick: I’m so excited for The Munsters that it’s going to be hard to watch the trailer without wishing that’s what we were playing instead, but this theme is inspired. You’re way better at this than I am.
Posted by Patrick Bromley at 5:00 AM