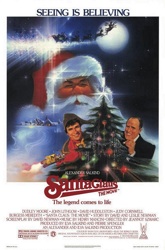 Like Katherine Heigl and Larry the Cable Guy, Santa Claus seems incapable of starring in a good movie.

Think about it: there's 1959's Mexican-produced Santa Claus, in which Santa fights the devil (and which was famously skewered on Mystery Science Theater 3000). There's Santa Claus Conquers the Martians from 1964. There's Fred Claus. It's saying something that the most respectable Santa Claus movie finds ol' St. Nick being played by TIM ALLEN.

(Yes, I know: Miracle on 34th Street. I'm still waiting for a legal ruling on the identity of Santa for that one. Plus, the joke works better with Tim Allen.)

In 1984, French producers Alexander and Ilya Salkind, the father-and-son team responsible for launching and then tanking the Superman franchise, tried to bring the definitive Santa epic to the screen with Santa Claus: The Movie (not to be confused with Santa Claus: The Santa). That they failed is not a surprise. That they failed is such spectacular and fascinating fashion kind of is.

JB Claus covered this movie briefly in his "Shitting on the Classics" column on bad Christmas movies last year, but I have somehow managed to go nearly 30 years without seeing it. Christmas is next week. It was in my Netflix Instant queue. It was time.

The main function of Santa Claus: The Movie appears to be to deconstruct the mythos of Santa and explain away ever story and fact we were told about him as children. How does he deliver so many presents in a single night? Because that night lasts an eternity for Santa. How do his reindeer fly? They eat a special kind of food. This whole movie is MIDICHLORIANS. What is the goal here? Presumably, it was to get kids into the theater to watch Santa Claus do his thing for two hours. Did the Salkinds think that kids wouldn't buy all that bullshit unless they were given a justification for every one of his magical powers? If kids aren't willing to accept the mythos of Santa Claus at face value, why would they go see a movie in which he is the star? Who is this movie for?

It begins by showing David Huddleston (the future Big Lebowski who, to the movie's credit, does a good job looking and sounding like how I think Santa looks and sounds) as a nice, elderly woodcutter who, along with his nice, elderly wife, travels around his unnamed snowy village delivering toys and gifts to local children. Then, a few minutes in, they go outside and freeze to death. Their two reindeer? Also freeze to death. In case you weren't sure, the camera pans back to show the nice elderly couple and the two adorable reindeer frozen to death. 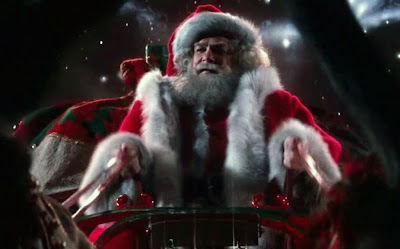 They are rescued by elves and transported to the North Pole (though I don't think it's mentioned by name, because when your movie deals totally in iconography, you'll want to be vague about some of the most famous aspects), where he meets a wise old elf (Oh -- elves are called "Vendequm") and another chipper elf named Patch, played by Dudley Moore collecting a paycheck to support a drinking habit. The elves dub him "Santa Claus" and tell him that he will deliver all of the toys in the shop; his response is to say "I won't live long enough to deliver all of these!" The elf corrects him and tells Claus and his wife that they will now live forever. Disregard the creepy vampiric overtones of this exchange (it reminded me of Keifer Sutherland talking to Jason Patric in The Lost Boys: "But you must FEED!"). Claus' FIRST reaction to meeting fantastical elves, being shown a magical workshop and told that it's now his to run is to CONSIDER HIS OWN MORTALITY. "Yes, this all seems magical and wonderful...but I'm going to be dead soon."

So the first half of the movie is all shots of Santa flying around and kids opening gifts and Christmas carols playing on the soundtrack -- it's some kind of Christmas porn. I wish I would have clocked the number of minutes the movie spends on showing Santa's sleigh flying over the cityscape, always trailing animated glitter and sparkles behind him (I can't imagine how many animators were responsible for drawing Santa's sparkle trail); it has to be a third of the film's running time. We get to see the invention of Santa's list, where Mrs. Claus determines that bad kids haven't earned presents and Santa tells an elf "Make up a list of who has been naughty and who has been nice." He then follow it up "Be careful -- I'll be checking it twice." BECAUSE THAT'S THE LINE FROM THE SONG. As JB is so fond of saying, it is a moron's idea of cleverness.

Once Santa has fully become Santa, the movie shifts gears to focus on Patch the Elf (Dudley Moore), who is one of a few elves who wants to be Santa's assistant. So will the movie be about the competition to see who will get the job? Nope, that's decided after one scene. Granted, it's a very long and tedious montage of toy building, at the end of which Dudley Moore is given the title of Santa's right hand man. But it's just a pointless detour, especially because Patch leaves the (not) North Pole shortly after that because he's feeling unappreciated. Motherfucker, Santa Claus just made you his Number Two. How should he show you that you're appreciated? Answer: Christmas H.J.

The movie shifts gears again, showing a young orphan on Earth (who is first shown staring longingly into the window of a prominently-placed McDonald's, followed by 60 seconds of close-ups of PEOPLE ENJOYING DELICIOUS McDONALD'S -- no surprise that the fast food company had a huge marketing tie-in with the move in the '80s) who encounters Santa and doesn't believe it's the real guy, what with him being an orphan with no reason to believe in anything good or magical or anything. So is the movie about Santa teaching a jaded orphan about the reality of his existence and the true meaning of Christmas? Nope, he does that in one scene. 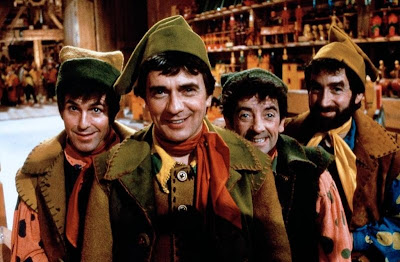 At the one hour mark, the film shifts gears COMPLETELY and follows Patch down to Earth, where he meets evil toymaker B.Z. (who sells teddy bears that are FILLED WITH BROKEN GLASS), who wants to take Christmas over from Santa. You know evil corporations -- always trying to reclaim the holidays over mythical beings. Patch, eager to demonstrate what a good helper he can be, invents the Puce Pop (named so for its color), a sucker that makes anyone who eats it fly. It quickly becomes the HOTTEST item for Christmas, as Americans can't get enough of floating seven feet off the ground for the duration of a lollipop. Santa continues to be bummed out and misses his friend. B.Z. continues to be horrible and evil (and played by John Lithgow at about the same pitch as Dr. Lizardo in Buckaroo Banzai, but at least in that movie the overacting made sense). Orphan Joe hooks up with B.Z.'s ginger-headed step-niece (the original red-headed stepchild?).

With Dudley Moore gone, Santa grows more despondent and sinks into a depression, lamenting the fact that he lost his friend and that kids seem to prefer Puce Pops to Santa's toys. Because kids want a Santa Claus that is wracked with self doubt. That is not Santa Claus. That is FUCKING HAMLET.

The screenplay for Santa Claus: The Movie is credited to David Newman, a writer of both Bonnie & Clyde and Michael Jackson's Moonwalker. Though there is only one writer credited (two for "Story by"), everything about the movie suggests that the Salkinds solicited ideas from every screenwriter in Hollywood, then combined every idea they received into a single script. One hour of the movie is a Santa Claus origin story; the second hour is the typical '80s and '90s Hollywood Christmas movie, where commercialization and corporatization threaten to ruin the purity and magic of the holiday. There are four or five detours even in that two-part structure. The movie's villain doesn't appear until halfway through. This is a script made up of many different colored pages.

Making any movie is an art, though artistry was clearly not on anyone's mind during Santa Claus: The Movie. Even the title smacks of a cynical cash grab. Making a childrens' film is a special kind of art -- one that cannot be faked. Everyone tries to fake it in Santa Claus: The Movie. There is a world of difference between creating something that is original and good and which COULD appeal to children and something that is engineered specifically to appeal to children. It reminds me of the way that one online critic describes Michael Bay's approach to filmmaking: whereas many directors fill their movies with things they hope audiences will respond to, Bay's movies take the position of "Here, you assholes will eat this up." It's very easy to sense when a movie has contempt for its audience. Santa Claus: The Movie has sugar-coated contempt for its audience, which is precisely the reason it never became a Christmas classic despite being made solely for that purpose. It's also a very bad movie. 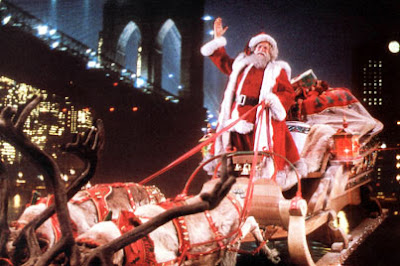 Supposedly, John Carpenter was originally going to direct the movie, but the Salkinds let him go because he want too much control over every aspect of the movie (including wanting to cast Brian Dennehy as Santa). Instead, they went with Supergirl director Jeannot Szwarc. CAN YOU IMAGINE THIS MOVIE DIRECTED BY JOHN CARPENTER?? All my life, I've been lamenting that we never got to see David Lynch's Return of the Jedi. Fuck all that. The Carpenter version of Santa Claus: The Movie is now the great lost gem of cinema.

Oh, right. The ending. The movie climaxes with a big chase where Santa and Dudley Moore and the orphan and the ginger are all reunited in Santa's sleigh. And what of the fate of John Lithgow? I'll let the plot description from Wikipedia explain (emphasis mine):


"The film's final images are of B.Z. floating away into space, doomed to die of asphyxiation in the upper atmosphere among the floating remains of the Patchmobile."