Double Feature 1:
Adam: #1: Suspiria (2018)
Patrick: #2: X (2022)
Patrick: Trailers/Shorts: Pearl, A Cure for Wellness, Maxxxine
Patrick: Theme: Goth Girl
Patrick: Mia Goth is having a real moment thanks to her collaborations with Ti West (two this year and one coming next year), so let’s dedicate a whole night to her excellence. I still haven’t seen Pearl as of this writing and barely remember her from Suspiria and A Cure for Wellness, so I’m looking forward to the refresher going into Maxxxine.
Adam: Yeah, Mia Goth is the best. She sort of came out of nowhere for me this year after X and has become an actor I’m excited to see now in every new movie she’s in. I hope her and Ti West keep collaborating after Maxxxine. You know what would be cool? A Nutty Professor type of movie, but with Mia Goth in different Pearl family makeups.

Double Feature 2:
Patrick: #1: Terrifier (2016)
Adam: #2: Tales of Halloween (2015)
Adam: Trailers/Shorts: V/H/S, Turbo Kid, Nina Forever, Terrifier 2, All Hallows Eve “Art the Clown” short
Adam: Theme: Epic Halloween
Adam: I wanted to pay tribute to Epic Pictures, who were a beacon of quality during those Bruce Campbell Horror Fests back in 2015 and 2016. I thought about pairing Terrifier (a franchise that has its hooks in me currently somewhat to my surprise) with V/H/S because they’re both similarly mean-spirited but that seemed potentially like a bummer night. Since both Terrifier and Tales of Halloween take place on Halloween, I couldn’t resist. Plus, I think Tales of Halloween would be a good breath of fresh air after something hardcore like Terrifier.
Patrick: You made the right call for sure, as this is a great double feature. I miss the old Epic Pictures. They haven’t put out much I’ve really liked in recent years, although I think they distributed Benny Loves You and that was pretty fun. Man, those Bruce Campbell fest days were the best, weren’t they? 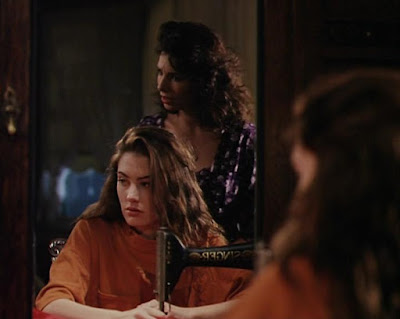 Double Feature 3:
Adam: #1: I’m Dangerous Tonight (1990)
Patrick: #2: Salem’s Lot (1979)
Patrick: Trailers/Shorts: The Apartment Complex, Amazing Stories “Miss Stardust” episode, Tales from the Crypt “Dead Wait”
Patrick: Theme: Tobe on TV
Patrick: I mean, it’s a no-brainer. Anytime we can celebrate My Guy I’m going to do it. I can’t wait to hear what you think of I’m Dangerous Tonight. It’s kooky but OMG. Plus, we get to watch a TftC AND an Amazing Stories!
Adam: This sounds incredible. I’ve been meaning to watch both movies for a while, so I would buy a ticket for this immediately.

Double Feature 4:
Patrick: #1: Old (2021)
Adam: #2: Abraham Lincoln: Vampire Hunter (2012)
Adam: Trailers/Shorts: Dark City, Bless the Child, The Devil’s Hand
Adam: Theme: Dark Sewells
Adam: I’m not exactly a fan of Rufus Sewell but I recognize that’s entirely because of the characters he is often cast to play and not his performances. A full-evening tribute to him is what I think I need to put me over the top in becoming a fan. Also, I can revisit Abraham Lincoln: Vampire Hunter, a movie I don’t like but now suddenly feel like watching. P.S. In my head, Old rules even though I know that is a lie I tell myself so I can sleep.
Patrick: Well at least this will be a chance to finally see Abraham Lincoln: Vampire Hunter! And it seems like a fun night of trash, especially with those trailers (minus Dark City, which rules). I’m probably in the same boat as you when it comes to Rufus Sewell, but I don’t think this night is going to turn the tide for me. 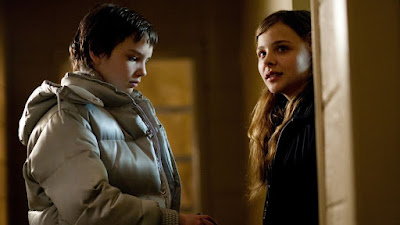 Double Feature 5:
Adam: #1: The Lost Boys (1987)
Patrick: #2: Let Me In (2010)
Patrick: Trailers/Shorts: Near Dark, Day Shift, Fright Night
Patrick: Theme: All the Damn Vampires
Patrick: It’s lazy, I know, but it’s Scary Movie Month and an all-vampire night seemed appealing. I think I’m at the point where I’d sooner watch Let Me In than Let the Right One In even though I know the latter is the superior movie. Am I the problem?
Adam: No, man; like what you like. I’m a bigger fan of Let the Right One In, but I only saw Let Me In when it came out so maybe I’ll like it more with some distance away.

Double Feature 6:
Patrick: #1: Paranormal Activity (2007)
Adam: #2: Cloverfield (2008)
Adam: Trailers/Shorts: Final Destination, Hatchet, House of 1000 Corpses, Saw, Underworld
Adam: Theme: 2000s Horror Franchise Kickoffs
Adam: I went with Cloverfield to pair with Paranormal Activity since they both similarly benefitted from online buzz to become hits. The trailer block should be fun! There were a lot of new horror franchises launched in the 2000s. I’ve only seen the original Paranormal Activity and Paranormal Activity: The Marked Ones. Should I go back and watch any of the others?
Patrick: I remember really liking 3, but I don’t remember much about the others despite having seen all but the most recent Paramount + one. This whole night would be a crazy blast. I always tell myself the early 2000s were kind of bad for horror, but this double proves me wrong. 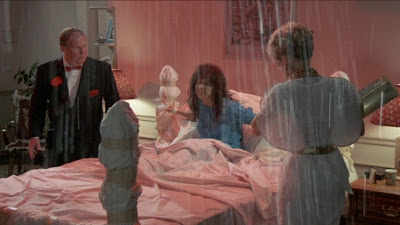 Double Feature 7:
Adam: #1: The Exorcist (1973)
Patrick: #2: Repossessed (1990)
Patrick: Trailers/Shorts: Scream, Scary Movie, Bram Stoker’s Dracula, Dracula: Dead and Loving It
Patrick: Theme: Spooky & Spoofy
Patrick: I thought it might be fun to pair some famous horror movies with the comedies poking fun at them. I suspect it’s a mistake.
Adam: I saw Repossessed on cable WAY BEFORE I ever saw The Exorcist and that is why I suspect The Exorcist has never been scary to me (it works for me more as a Drama). This sounds like a lot of fun! 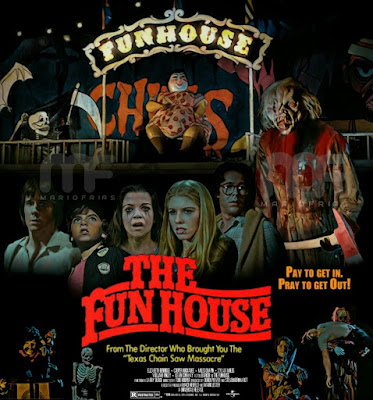 Double Feature 9:
Adam: #1: Final Destination 3 (2006)
Patrick: #2: The Funhouse (1981)
Patrick: Trailers/Shorts: House on Haunted Hill (1999) rollercoaster scene, Ghoulies 2, The Amusement Park
Patrick: Theme: Amusement Park Horror
Patrick: I had a really hard time with this one, so I just used the big rollercoaster set piece as a jumping off point to program one of my favorite horror movies. How crazy is that House on Haunted Hill rollercoaster? That’s a gag that works exactly once. Don’t they want people to ride it again?
Adam: Every time I re-watch House on Haunted Hill (1999), I think about how bad the lines must be for that ride between the track gag and the elevator gag. This seems like a fun double feature. We should get a street carnival going outside the theatre.

Double Feature 10:
Patrick: #1: The Wicker Man (1973)
Adam: #2: Jaws (1975) in RealD-3D
Adam: Trailers/Shorts: House of the Dead, The Island of Dr. Moreau (1996), Island of Lost Souls, Zombie, The Wicker Man (2006)
Adam: Theme: Island Terror
Adam: I was so glad to hear recently how much you liked The Wicker Man (1973)! Let’s pair that classic with another. I want to watch Jaws again though in 3D. It was incredible when I saw it in theaters that way last month.
Patrick: The Wicker Man is so good! I’m not saying anything people don’t already know. I missed Jaws in 3D back in September, so I appreciate the opportunity for the makeup. Plus, that trailer block is pretty rad! Can we buy our own island to host the screening?
Posted by Patrick Bromley at 12:00 PM