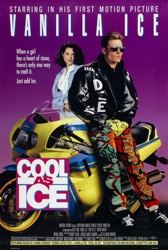 Back in February, we hosted the second annual F This Movie Fest, during which we celebrated the great movies of 1991. I guess we overlooked Cool as Ice.

There is a long tradition of pop stars getting their own movies, from Mariah Carey (Glitter) to Justin Guarini (From Justin to Kelly). Some, like Madonna or Cher, are able to make a transition from "singer trying to act" to "actor/actress who is taken seriously." Usually, though, it's more along the lines of Rick Springfield in Hard to Hold -- a quick, one-and-done cash-in. That's Cool as Ice.

Nowadays, rappers are almost always taken seriously in movies. That's because a lot of them are good: DMX has held the screen with both Steven Seagal and Jet Li, Common is a dependable and consistently strong character actor, RZA has iron fists. But back in '91, the screen had really only seen Run DMC in Tougher Than Leather (which I have wanted to see my whole life) and the Fat Boys in Disorderlies. By the time Cool as Ice was released in the fall of '91, Vanilla Ice himself had already appeared on screen performing "Ninja Rap" in Teenage Mutant Ninja Turtles II: The Secret of the Ooze, a film slightly better than Cool as Ice. 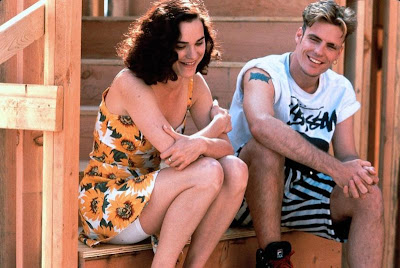 The movie is your basic love-across-the-tracks story. Vanilla Ice plays Johnny Van Owen (though I watched the whole movie and can't remember him being referred to by name once), who begins the movie by rapping in a warehouse while supermodel Naomi Campbell sings backup and throws phones at people. He's a bad boy with a heart of gold, who spends his days not working and riding motorcycles and hanging out with his crew and basically being as cool as ice. That's very cool!

His love interest is played by Kristin Minter, a very pretty girl cut from the same cloth as Elizabeth McGovern and the girl from Uncle Buck. She also played the oldest daughter in Home Alone -- the one who got the head count wrong and who ultimately was responsible for hilariously ruining lives. She's Kathy Winslow, honor student and all-around goody two-shoes from the RIGHT side of the tracks. She's college bound and in a relationship with Nick, the kind of frat boy asshole that every girl dates in movies until a novelty rapper rolls up and steals her away.

Which is exactly what happens! One night, after Vanilla and his boyeez bum rush a lame band performing at a club, take the mic and rock it like a vandal, Kathy is attacked and saved by Johnny. He suggests that she drop her boyfriend, who he sizes up as being a "zero" (meaning he is not worth anything and therefore is not a suitable mate) and enter into a relationship with him, identifying himself as a "hero" not so much because he did, in fact, demonstrate heroism in rescuing Kathy from the attack but rather because it rhymes with the word "zero." DO YOU GET IT?

But wait! Kathy's father (Michael Gross, seconds away from blowing his brains out) and mother (Candy Clark, whose career went from "Dream Girl" in American Graffiti to "Mom" in Cool as Ice) don't approve! But her little brother Tommy does, and even cuts his hair to look like Vanilla Ice! Don't worry, kid. A lot of people were doing that in 1991. Kathy and Vanilla begin a romance because he steals her journal (this movie is a filofax away from being Taking Care of Business). They chase each other around a partially constructed house, then they ride horses, then they go for a motorcycle ride on the beach. All in one afternoon! I am wasting my life.

Cool as Ice makes use of that classic '80s trope in which some sort of CRIME is introduced into the plot because the writer isn't sure what to do with a bunch of characters talking to one another (this is something that could use an F This Movie! Glossary entry). Two thirds of a movie will be about its own premise, but then no one knows how to end the thing and so they introduce a guy with a gun in the final act. Three Men and a Baby did it. Twins did it. Even Family Ties Vacation did it. Most recently, Seth MacFarlane did it in Ted. Instant drama! The work is done!

So Cool as Ice reveals about two-thirds of the way through that Michael Gross was once a cop who turned in some corrupt officers and is now in the Witness Protection Program. He's suspicious of Johnny because he doesn't trust any strangers. I guess it has nothing to do with Vanilla's haircut. Well, wouldn't you know that the dirty cops find the Winslow family and kidnaps little Tommy! Now it's up to Vanilla Ice and his rapper friends to go get him back, earning Dad's trust in the process! Crime DOES pay! 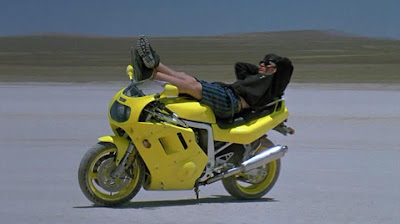 A lot of things in this movie are...how should I say?...misguided. For starters, just read the tagline on the poster:

"When a girl
has a heart of stone,
there's only one way
to melt it.

Read that again. Then read that SEVEN MORE TIMES. We're supposed to MELT STONE with ICE? WHAT IN THE WORLD DOES ICE MELT? The marketing department was so desperate to work the word "ice" into the advertising that they chose to IGNORE SCIENCE. It is but one example of this movie defying any and all logic in the interest of trying to be hip and appealing.

Take, for example, a scene early on where Ice and his friends go back to their weird Hypercolor house to sleep or practice dance moves or whatever it is they all do when they are home. One of the girls is preparing herself some sort of green food ("It's people!") and reaches for the salt shaker way in the foreground. At least, we THINK it's way in the foreground. It's actually AN ENORMOUS SALT SHAKER. It's a visual gag straight out of The Monkees, the stylization of which the movie seems to be going for in its first third. That may have been a miscalculation; while it's an attempt to inject some energy into the film, anyone going to see their beloved Vanilla Ice on the big screen back in 1991 probably wasn't interested in broad, absurdist comedy.

Ultimately, Cool as Ice is an exploitation movie. It's not the kind that's been championed by Quentin Tarantino or approximated in Grindhouse. It's not the kind that the cool kids like. But it's a cheap movie with a single exploitable element: Vanilla Ice himself. Even on that level, the movie doesn't really work, because it fails to really make "use" of Ice. He raps at the beginning, he raps at the end, he dances a little, but even in 1991, fans of Vanilla would have come away from the movie only appreciating that he was on screen for 90 minutes. It doesn't give them their money's worth, as far as what Vanilla had become famous for; there isn't much for the rest of us, either, since the movie also fails to provide compelling evidence that Vanilla Ice was a secretly charming or charismatic guy. It's not really his fault -- he's playing "Vanilla Ice" with a brand and a reputation to protect, so he never breaks the character -- but his every line delivery and facial expression is the same throughout.

I do appreciate that the movie doesn't spend too much time trying to set up Johnny/Vanilla as the COOLEST GUY EVER. Don't get me wrong -- he is VERY COOL, with his biker shorts and his very specific haircut and his motorcycle and his warehouse rapping and he is presented without a single flaw -- but he's basically gentle and nice, much more interested in romancing a girl than in crushing ass. The movie adopts the same approach as Rebel Without a Cause, setting up Vanilla as the bad boy and then revealing the softer sensitivity underneath. And, yes, this might be the first time that Cool as Ice has been compared to Rebel Without a Cause.

Cool as Ice is one of the most aggressively early-'90s things I have ever seen. It has the visual aesthetic and stylization of a Saturday morning Pop-Tart commercial. Because this is a movie starring a musician who was a sensation on MTV at the time (though I'm pretty sure his star was already falling by 1991), you would think that Cool as Ice would be shot just like an MTV video. And I guess it kind of is, but not in that Ridley Scott, lit-through-smoke way. It's shot just like a music video, as long as that video is "Parents Just Don't Understand."

The craziest thing about the insanely obnoxious visual aesthetic? The movie was shot by Academy Award-winning cinematographer Janusz Kaminski. Yes, Steven Spielberg's DP -- the man who shot Schindler's List and Saving Private Ryan and Lincoln -- was in charge of designing a lighting scheme and choosing the lenses for Cool as Ice. It is so aggressively unpleasant to look at sometimes that I would have guessed whoever shot it went right back to working in commercials afterwards, not that he would become one of the most successful and beloved cinematographers of the last 30 years.

The movie is directed by David Kellogg, a filmmaker known for work like Playboy: Farmers' Daughters and Playboy: Wet & Wild and Playboy Video Centerfold: Dutch Twins. Prior to Cool as Ice, Kellogg's entire body of work consisted of Playboy videos, which might help explain why Cool as Ice is so great to masturbate to. His only feature film after Cool as Ice is Inspector Gadget in 1999 -- a Disney production, meaning Disney was either willing to ignore a career's worth of Playboy videos or were so impressed by Cool as Ice that they could overlook all the other stuff. Or that Kellogg was willing to work for free.

It's unfortunate that Cool as Ice wasn't a hit (it made only $1 million on a budget of $6 million), because it could have led to a whole genre of movies starring white guy novelty rappers: Marky Mark and the Funky Bunch in Funky Love. Or Canadian rapper Snow in Snow: The Motion Picture ("This summer, the forecast calls for Snow!" or "This summer, one man will licky boom boom down."). 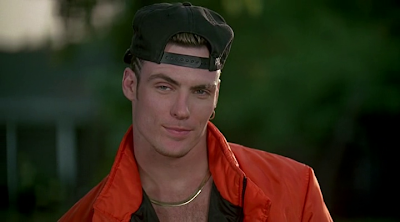 So of course I went into the movie with a cynicism. Try as I might to always open myself up to the possibility that I will like every movie I watch, there seemed to be little chance that Cool as Ice was going to work for me. At the same time, I found a lot to like in Breakin' 2: Electric Boogaloo, which was silly and cheap but also very sweet and energetic. Maybe I would be able to see past the ugly production design and overly busy photography and cartoonish early '90s fashion and see the good in the Vanilla Ice movie.

Nope! While it's not the worst movie I've ever seen -- it's not even the worst movie I've seen this year -- there is really nothing to like about Cool as Ice. Vanilla Ice doesn't embarrass himself any more as an actor than he does as Vanilla Ice, but he never drops the act long enough to reveal any kind of person underneath. Maybe he could have had some sort of acting career -- he was one of the better things in last summer's terrible Adam Sandler comedy That's My Boy -- but there's no indication of that here. The movie works overtime to be energetic and zany, but there's no sense of fun to any of it. The whole thing just comes across as garish and dumb. It's not good enough to recommend, but it's not bad enough to talk about, either.

Word to your mother.