It’s getting cold outside. Why not stay in and watch a double bill? 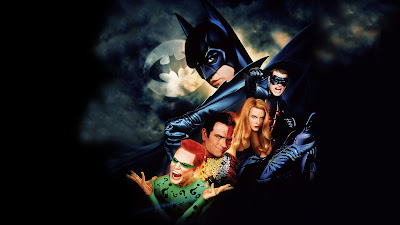 Patrick: I legit spent a few seconds considering programming this with The Cobbler so I could make the theme “Shoe-maker” but I don’t hate myself enough. Instead I went super basic and chose Summer ‘95 because I will find any excuse to rewatch Waterworld. I don’t think either of these are great movies but I think they would be SUPER fun to watch back to back. They’re blockbusters that are so much of their time in a really good way. Plus, adding in the trailers makes for a pretty excellent night of nostalgia.

Adam: Sometimes basic is better. I love this double feature. Even better because despite my Costner fandom, I think I’ve sat and watched Waterworld in its entirety only twice. I once named Summer of 1995 as the best movie summer ever, so you had me at hello. Batman Forever is so nostalgic to me that if we took the Mall Movie Time Machine to June 16, 1995 to see it and you said afterwards “Ok time to go home,” I would say “I am home” and then send you back alone. 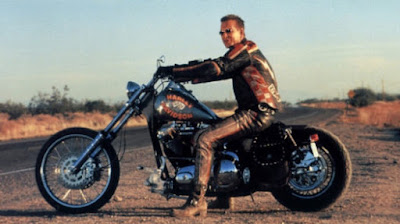 Adam: I’ve never seen Harley Davidson & the Marlboro Man. My two associations with that movie are it sometimes plays on MGM-HD and I was at a theater seeing Hot Shots! the night Harley opened. I knew I wanted to work that into the theme somehow. Of the movie ads listed on this page of the Trib, Double Impact seemed like the best pairing because it’s also a buddy action movie. I also wanted to go with this theme because recently I’ve started to really miss newspaper ads for movies in the weekend papers. I even went as far as buying a New York Times a couple of weeks ago (I remembered they still had them in their Friday paper), but even they’ve cut back and it’s just for the independent films opening in NY & LA that day. It sucks. Those ads were so crucial to my getting excited about a movie when I was young. Remember how cool it was when they would do a special holiday ad for a hit movie? Or if the studio sprung for a big full-page color ad?

Patrick: Those ads were a staple of my youth. I would pore over them and memorize them every Friday, sometimes even cutting them out and hanging them up in my locker in junior high. This entire bill -- especially the trailers -- remind me of how much I love 1991 for movies. Double Impact is the absolute right choice to pair with Harley & Marlboro, a movie I really enjoy and could never, ever defend. 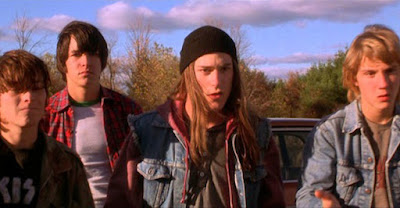 Patrick: Theme: I’m With the Band

Patrick: So many movies about bands end up being about drug use or dysfunction or bringing Jennifer Aniston to a swingers party. I only want to do a band-themed double feature if it’s fun, and while Detroit Rock City is brainless and bratty and stupid and obnoxious, it’s certainly trying for fun. I love Adam Rifkin and I love KISS and the movie fails to live up to my affection for either one, but it’s the right kind of movie for a night like this. Plus, That Thing You Do! is one of the best movies ever made and nothing can actually follow it, so it’s best to chase it with something that doesn’t even try to come close.

Adam: This is sublime and that’s all I have to say about it. I never saw Detroit Rock City, which is weird because I remember really wanting to see it when it came out and just never did. 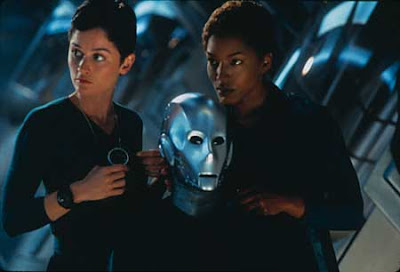 Adam: Supernova was one of the first movies released in the 21st century, so let’s celebrate that with some of MGM’s stable at the dawn of the century (i.e. 1999 or 2000 releases). For time capsule enhancement, I’ve included the music videos for the Billboard top five singles on the day of Supernova’s release - January 14, 2000. They’re kinda bad.

Patrick: This feels like some of the worst pop culture had to offer at the turn of the century, and I say that as someone who actually likes Supernova despite what a derivative mess it is. Those songs are all the musical equivalent of Stigmata. To be fair, though, I like most of the movies for which you’re programming the trailers. Not Autumn in New York, though, because I’ve never seen it. Trying to convince me to watch a movie in which I know Winona Ryder is going to get sick and die is like trying to get me to watch Marley & Me. 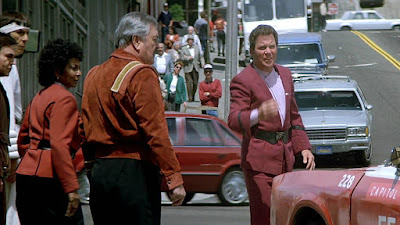 Patrick: There’s very famously a version of Star Trek IV that was supposed to star Eddie Murphy, who was a big star with Paramount at the time and a lifelong fan of Star Trek who expressed interest in joining the franchise. As anyone who has seen Superman III can attest, it’s for the best that it didn’t happen. It’s just one of several big roles which Murphy didn’t accept, and while Rush Hour isn’t the best movie on which he passed, it’s the one I feel like would be the most fun to watch as a double bill after Star Trek: The One With the Whales.

Adam: More than anything, I find it baffling that Eddie Murphy was almost in Malcolm X. I think these two movies will play well together because there’s a friendship thread running through both. Real talk: “Remember the Time” is the best Michael Jackson song of the 1990s. I take that back. It’s “Will You Be There.” 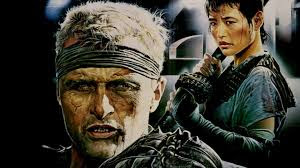 Adam: There was a lot of fighting content in 1989.

Patrick: The “competitive fight” movie is maybe my least favorite subgenre of action. Weird that it was so huge in ‘89. Maybe everyone was expecting the ‘90s to be a decade-long bare-knuckle brawl and wanted to be ready.

Adam: I’d apologize for ruining this pairing for you if I didn’t love competitive fight movies as much as you don’t love them. 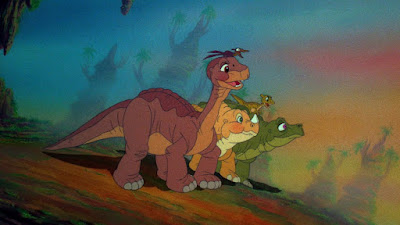 Patrick: We will have to pass out neck braces before this one. I know I saw the original LBT in theaters as a kid but I remember nothing about it, nor have I ever seen any of its two dozen DTV sequels. Short of programming another dinosaur movie, I was stuck for a theme and opted to go with Herschell Gordon Lewis’ pioneering classic of gore. Cartoon dinosaurs are almost as cute as people getting their tongues cut out, right?

Adam: I am speechless. Lucky for you (and me), I love both of these movies albeit in very different ways. The Land Before Time is emotionally draining, so following it with the goofy fun that’s Blood Feast feels right. Let’s do this! 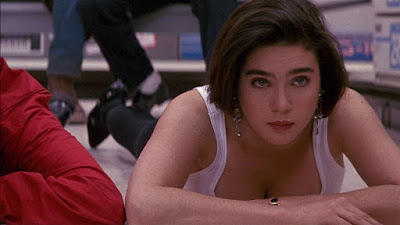 Adam: I look up Jewish actors regularly anyways, so this wasn’t a big deal (New: Tiffany Haddish - didn’t know that one). I remember seeing Career Opportunities at age 8, watching Jennifer Connelly and not knowing how to process it. All I knew was that it made sense to me and she was seriously slumming with Frank “he happened so often there’s actually a term for it” Whaley. I also will finally watch Welcome Home, Roxy Carmichael which I remember coming out the same night as a Fun Fair at my elementary school.

Patrick: I was a few years older when I saw Jennifer Connelly in Career Opportunities (released on my birthday; I saw it at the Randhurst Mall after buying some comics at Moondog’s and eating Sbarro’s, so it was maybe the perfect birthday at that age) and had the same reaction. Actually, I caught some of it on cable earlier this year and had the same reaction. I think it’s the only possible reaction to her in that movie. Also, thank you for teaching me so much about Jewish celebrities without making me listen to an Adam Sandler song. I’d much rather find out this way.

Adam: I miss the Randhurst Mall. The dining court had a merry-go-round. It was the perfect place to take Jennifer Connelly. 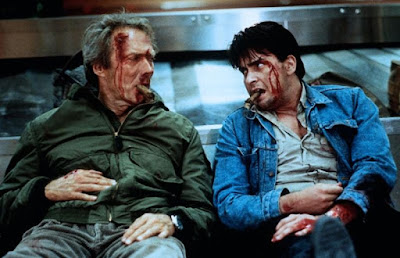 Patrick: My love of the buddy cop movie is well documented, and the old man/young man subset of this genre is one that’s too often unexplored. What happens when a handsome, cocky upstart is paired up with a craggy, miserable fuck? We’ll find the answers tonight.

Adam: Craggy, miserable fuck is such a great descriptor to call any person. I’ve only seen The Rookie (1990) once and didn’t like it much but it’s the type of movies that’s all balls and hard to dismiss. I will watch it until I like it is what I’m saying. 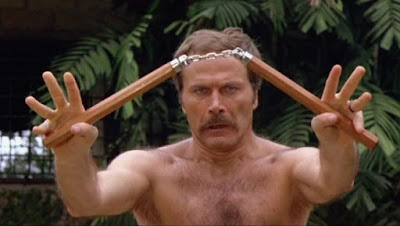 Adam: I knew this “Schoelen Tell” pun wouldn’t be a one and done! This works out even better because Enter the Ninja and Thunder Alley are both Cannon films. I know I’ve seen every movie in the Ninja trilogy but, outside of V8, cannot remember any of them. A revisit is due. The poster for Thunder Alley is pretty great btw. I’m not sure how these will play together. I’m guessing Sho-Schoe.

Patrick: Thunder Alley is good but very atypical of Cannon. It’s just a drama about about the rise of a band with some addiction stuff thrown in, though I like the songs and the movie is very sincere. It might play better first on the bill. The very idea of an entire night devoted to cinema’s two greatest Shos is cause to celebrate and makes me want to watch this double bill ASAP (As Sho As Possible).
Posted by Patrick Bromley at 5:00 AM