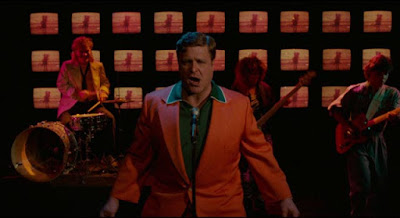 When Patrick first told me that 1986 was likely the year for 2019’s F This Movie Fest, 1985 popped in my head. Years ago, I put together a list of favorite songs from 1985 movies as we were celebrating ‘85 for the 2014 F This Movie Fest, and I had the most fun writing it (of course as soon as a submitted it to my beardy editor/boss, I realized I had forgotten some favorites, as I am SURE I will do right now).

I grew up in a family that always had music playing, and it was a pretty eclectic mix. I still appreciate that today: that I was exposed to so much and was given the opportunity to explore a variety of genres, styles, and decades. But what was REALLY important? That my family also liked movies, and music from movies ruled the '80s! I might have been single digits in 1986, but I remember the music like it was just last summer. (And don’t get me started with music videos that featured clips from the actual films.... THE BEST.) Here are some stand-outs!

Despite knowing the soundtrack very well, At Close Range is a 1986 film that escaped me until this winter. The film opens with Sean Penn driving late at night and noticing Mary Stuart Masterson in a parking lot (?) with her friends. It’s all mood and looks. When the first few instrumental notes of Madonna’s “Live to Tell” slowly played in the background, I knew I was hooked. I loved the movie, though it is an incredibly heartbreaking story (the film is based on sad, true events related to rural crime), and 33 years later, after probably tens of thousands of listens, “Live to Tell” feels modern and important still. This might be Madonna’s best song ever?

The world’s largest Prince fan is Adam Thas. After him, it’s me! Does “Kiss” count as being from Under the Cherry Moon? It is in there, albeit briefly. My very quick bit of research on its release doesn’t make it clear, but regardless, “Kiss” will ALWAYS be Julia Roberts in a hotel jacuzzi filled with bubbles. Still, if I can include Prince on any list, I’m going to do it.

I don’t think I’ve revisited Short Circuit since the '80s despite how much I loved it as a young kid. El DeBarge’s “Who’s Johnny” is, for me, early childhood and dancing around the house all day long. (My mom allowed VH1 to be on for hours, and we were the first house on the block with cable when it became available in our neighborhood! I watched A LOT of music videos is what I’m saying. Is that a humble brag? Sorry! But MOVIE music videos!) Look at DeBarge’s smile in the video. And Ally Sheedy. And the film clips. And the dancing courtroom characters. Gosh - I love it so much! Turn it up, give yourself a side pony, and pop your collar right now!

I don’t know where to begin with the Top Gun soundtrack. Was there even a movie (there was: just ask Doug), or was the audience just there for the music? Especially if they were a Kenny Loggins-loving audience. There’s that volleyball scene, and the men (and women!) in uniform, and the Goose and Carole romance (“Take me to bed or lose me forever,” a line I have quoted WAY too many times - since before I truly knew what it meant!), and the throwing of the dog tags (Adam Riske can speak to this scene), and the aerial photography of the fighter jets, and the Tony Scott classic sex scene… which brings us to “Take My Breath Away” by Berlin, a song that can’t be heard without picturing Tom Cruise and Kelly McGillis slowly moving in silhouettes to Scott’s sultry blue-lit backgrounds. Grade school me thought THIS IS WHAT LOVE LOOKS LIKE. Adult me knows it’s actually way better.

I once won a contest at a large wedding when the DJ played a clip of Peter Cetera’s “Glory of Love” and then asked the crowd what movie it was from. Nearly all in attendance screamed out, “THE KARATE KID! But the DJ heard me yelling, “KARATE KID PART II,” and I won the prize! Since that winning moment from the early 2000s, I’ve won nothing else with the exception of Oscar contests and free pizza. Not bad, actually. On brand.

I didn’t grow up planning a wedding, wanting to be a princess, or hoping to be “saved.” Still… I’ve been a romantic since as far back as I can remember, and my God did this song work for early grade school Erika. Once I had my own cassette player (thank you, Mom, for knowing I wanted that more than the toys most kids were playing with), I’d blast the tape and sing the lyrics loudly in my room. (I was so easily entertained as a kid! Admittedly, not much has changed on that front. On brand.) Just a sample but, what else needs to be said? So much romance:

“Tonight it's very clear, as we're both standing here,
there's so many things I want to say
I will always love you, I will never leave you alone.
Sometimes I just forget, say things I might regret,
it breaks my heart to see you crying.
I don't want to lose you,
I could never make it alone.
I am a man who would fight for your honor,
I'll be the hero you're dreaming of.
We'll live forever, knowing together
that we did it all for the glory of love.
You keep me standing tall, you help me through it all,
I'm always strong when you're beside me.
I have always needed you,
I could never make it alone…”

The ending of Pretty in Pink has so many problems and decades later seems to make no viewer happy. But John Hughes gave us what a test audience from the mid '80s wanted (#groan), so we have to deal with it. I will say at least Duckie ends up dancing with babe-and-a-half Kristy Swanson (circa '86) at the prom. Nothing I say about “If You Leave” by Orchestral Maneuvers in the Dark will do it justice. It’s the best, and I am sure it is responsible for many parking lot kisses. And maybe babies. Just listen.

“Love Touch” from Legal Eagles got soooo much airplay in my house in 1986. It feels like summer to me: bubbly, upbeat, sweet, and easy. “Just give me a chance to let me show you how much… I want to give you my love touch!” I hear you, Rod. (Note: this is the second 1986 movie music video to feature a courtroom scene and a dancing jury. If dancing juries are your thing, look no further than 1986.)

Take some time to read the Billy Joel’s lyrics from “Modern Woman” featured in Ruthless People. Joel knew what was up! A sample:

(I couldn’t find the actual video!!!)

Much like “Love Touch,” “Live to Tell,” and “If You Leave” (to name a few), “Sweet Freedom” from Running Scared is a song that both Patrick and I grew up LOVING and later had many conversations about as we were getting to know each other. We loved all these '80s movie songs like our lives depended on it, and we didn’t really know anyone else at the time who felt the same (#schmoopy). In this video, we again get those beloved movie clips, and we get the feeling that everybody is living their best lives. It’s bittersweet anytime I re-watch a Gregory Hines appearance, as I was a huge fan. He made it cool to tap dance. (I may be the only one in the FTM! community who repeatedly watched the 1989 film TAP…?) Running Scared made Billy Crystal an unlikely action hero, and “Sweet Freedom” made me the unlikely fan of ANOTHER Michael McDonald song. (“What a Fool Believes” is a guilty pleasure, though I feel no guilt. And have you seen McDonald’s beard? Am I coming out as a McDonald fangirl?) Let’s focus: this movie rocks, and “Sweet Freedom” can lift any dark cloud on any day.

David Byrne is an international, fascinating treasure, and “Wild Life” features in a favorite scene from True Stories, Byrne’s directorial debut. I wish I could ask him why he didn’t direct more feature films after this (one of JB’s favorites!). Watching this movie recently made me pull out my old Talking Heads CDs. So many favorites.

Oh, Something Wild. I’m really trying to avoid being schmoopy as I write, but it is soooo hard when movies and music play such a role in life and love for many of us. I’ll just say this: I love this Jonathan Demme movie, and “Loco De Amor” by David Byrne (second time on this list!) and Celia Cruz recently made Patrick text me schmoopy things from a book store. I love these crazy lyrics. “Like a pizza in the rain,” anyone? Yes, we’d still eat that pizza. It’s PIZZA.

It’s pretty well-established on this site that I LOVE Boogie Nights so much I could cry. But we are not talking about 1997 right now. And “You’ve Got the Touch” was from Transformers: The Movie originally.

An American Tail’s “Somewhere Out There” used to make me cry as a kid - one of the first songs to really do that to a young, overly empathetic, passionate, and intuitive Erika. It will always make me think of my younger brother and cousin, who loved the movie and sang this song with the cutest toddler voices. And it will always make me think of my beautiful and loving Italian grandmother, who once sang this song to me (to add to the FEELINGS, I think I stared at the moon all night that same evening).

A guy in high school gave me a cassette single of The Color of Money’s “It’s in the Way That You Use It” (despite CDs having been out for over a decade). I’m not sure why. I think he just wanted to have something to talk about. I gladly accepted! More Tom Cruise, because of course.

I’m going to take a break to watch that on repeat. But I know I’ve left out songs from 9 ½ Weeks, Labyrinth (my/everyone’s beloved Bowie, whom we’ll see on Saturday!), Nothing in Common, About Last Night (Sheena Easton!!)...

I’d love to hear about your favorites from 1986 in the comments! Happy 1986 week, and I look forward to #FThisMovieFest with you on Saturday!
Posted by Patrick Bromley at 12:00 PM