The double bills you need while you eagerly await Scary Movie Month!

Patrick: I was originally going to try to program a “What else opened at One Schaumburg Place in 1991” double feature but I couldn’t remember what else opened with it. Anyway, I know you’re on a big Tales from the Crypt kick so this was a good excuse to program one of the very best episodes of all time. And while I don’t love either of these movies on the bill, I think they’re both just good enough to make for a fun night at the movies if we watch them together.

Adam: I miss One Schaumburg Place. That theater felt magical to 9-year-old me. I appreciate you programming a Crypt episode. I’m a little over ⅓ done with my re-watch. It’s been (Dafoe voice) a lotta fun. I’m in the same boat as you with The Addams Family, although I’ve seen it so many times over the years, that I should probably just admit I like it (Addams Family Values is better). I watched Idle Hands for the first time last Scary Movie Month and didn’t like it but I’m ready to give it another chance at the Music Box of Horrors this October.

Double Feature 2:
Patrick: #1: Mulholland Drive (2001)
Adam: #2: Vanilla Sky (2001)
Adam: Trailers/Shorts: Alice in Wonderland, A Nightmare on Elm Street, Bad Dreams, Inception, Last Night in Soho
Adam: Theme: Bad Dreams
Adam: Dream movies always intrigue me because it gives filmmakers so much leeway with both psychological elements and visuals. It’s hard to find a movie to play after Mulholland Drive (it’s such a full experience), but it would be cool to watch Vanilla Sky afterwards since they’re both from the same year and achieving similar things in very different ways.
Patrick: That’s actually a great lineup. I didn’t realize I was kind of fucking you over by playing Mulholland Drive first, and for that I apologize. I happened to be watching it while working on this column.
Adam: There is no fucking over ever when it comes to suggesting a rewatch of Mulholland Drive. 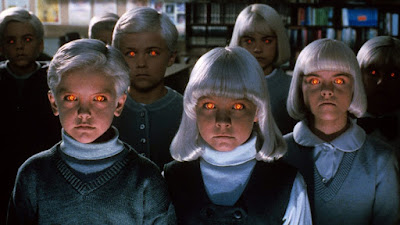 Adam: #1: Christine (1983)
Patrick: #2: Village of the Damned (1995)
Patrick: Trailers/Shorts: Prince of Darkness, Masters of Horror “Cigarette Burns,” “Night” music video
Patrick: Theme: Underrated Carpenter
Patrick: Calling Village of the Damned “underrated is a total stretch, but almost every one of his movies has been reevaluated and appreciated by now (including Prince of Darkness, which rules but I snuck it into the trailer block anyway). I know his heart wasn’t totally in VotD, but there’s so much good stuff in there still that it’s a real look at what we might have gotten if Carpenter had become a true journeyman “for hire” filmmaker. Well, Starman is probably a better example but that one is already beloved.
Adam: I’m a bit ashamed that I still haven’t seen Carpenter’s Village of the Damned -- or Starman for that matter. I have seen Ghost of Mars and The Ward, so yay!? I could totally see myself watching this double feature in October. I’m not too familiar with Christine. I’ve only seen it once. I just remember Kelly Preston because once I see Kelly Preston in a movie all I can think about is Kelly Preston.

Patrick: #1: Monster on the Campus (1958)
Adam: #2: Night of the Creeps (1986)
Adam: Trailers/Shorts: Final Exam, The Dorm That Dripped Blood, The House on Sorority Row, Fright Night Part II, Urban Legend
Adam: Theme: College Horror
Adam: I dig College Horror movies so I’m pretty excited about this double feature. The beginning of Night of the Creeps being set in the 1950s would make for a nice transition from Monster on the Campus (which I’ve never seen, but now want to). How is it? Do we have money in the budget to do a roadshow? We should play this at The Union!
Patrick:.This lineup rules. Monster on the Campus is really fun! I first saw it back at one of those Toy John shows at the Portage and now I have the Scream Factory Blu-ray. It’s kind of a Wolf Man riff. I didn’t realize I liked college horror so much until I saw the evening you had planned for us.
Adam: We didn’t know how good we had it with those Toy John marathons at The Portage. 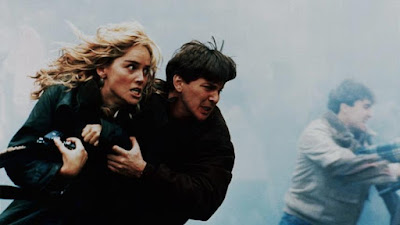 Adam: #1: Year of the Gun (1991)
Patrick: #2: Hook (1991)
Patrick: Trailers/Shorts: Batman V. Superman: Dawn of Justice, Dear Evan Hansen, Xanadu
Patrick: Theme: 29% on Rotten Tomatoes
Patrick: I have never seen Year of the Gun so this was a real reach. I know I’m not going to feel like watching Hook after it, either, but I figured I had to lean all the way into the theme and punish myself.
Adam: I haven’t seen Year of the Gun either, but I remember wanting to see it when I was a kid for some reason (probably because I liked Andrew McCarthy). Your punishment is my pleasure, apparently, because the last time I watched Hook was the best time I’ve watched Hook. It worked for me more as an adult than it did when I was a kid. I’m broken apparently. Just like Peter Banning.

Patrick: #1: Showgirls (1995)
Adam: #2: Sudden Death (1995)
Adam: Trailers/Shorts: Vampire in Brooklyn, It Takes Two, Johnny Mnemonic, The Quick and the Dead
Adam: Theme: Ranked #80-#85 at the Box Office in 1995
Adam: Your “29% on Rotten Tomatoes” theme inspired this one. I like using numbers to come up with random pairings that would’ve never happened otherwise. I knew 1995 was stacked but maybe I didn’t know the extent of the stacked-ness if this was the #80-#85 top grossing films of the year. I don’t love Showgirls but, in this setting, (and knowing Sudden Death is on the way) it would definitely be a fun night at the movies.
Patrick:.See, this is how you do it. This seems like such a blast and would ABSOLUTELY sell out in real life. I don’t think I realized how stacked ‘95 was until I looked at your trailer block and saw that even some good movies ended up near the bottom. This might be the one I really want to do. 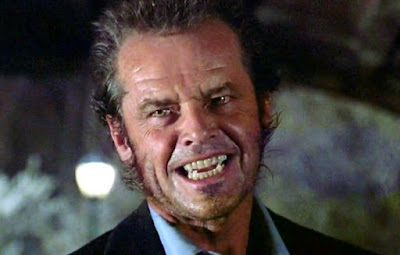 Adam: #1: Mary Shelley’s Frankenstein (1994)
Patrick: #2: Wolf (1994)
Patrick: Trailers/Shorts: Bram Stoker’s Dracula, Mary Reilly, The Mummy (1999)
Patrick: Theme: ‘90s Remakes of Universal Monsters
Patrick: I mean, it’s so obvious but I couldn’t resist. What a weird and special time it was for horror. Is Mary Shelly’s Frankenstein good? It’s been at least 20 years since I last watched it. I know Dracula is probably the best movie out of the bunch but Wolf is the one I can watch pretty much anytime. I’m broken.

Adam: I’m a big fan of this fad in Horror during the ‘90s. Most of those movies hold up really well on re-watch (Mary Shelley’s Frankenstein included, which I’ve always liked). We still need to do that Wolf episode.

Double Feature 8:
Patrick: #1: Tank Girl (1995)
Adam: #2: Barb Wire (1996)
Adam: Trailers/Shorts: 300, Alien vs. Predator, The Mask, Mystery Men, R.I.P.D., Sin City, Timecop
Adam: Theme: Movies Based on Dark Horse Comics
Adam: This is my kind of comic book double feature. I need something more mall-ish/Hot Topic than superheroes. I’ve never seen Tank Girl, should I? Maybe this could be next year’s February Sci Fi/Fantasy F**kup selection?
Patrick:.I would totally be down for a Tank Girl show. I like that movie. It’s peppy. It’s got Ice-T playing a kangaroo. There was a time where no bad movie had an Ice-T performance, wasn’t there? I love this double. It’s maybe the malliest mall movie double that ever malled. 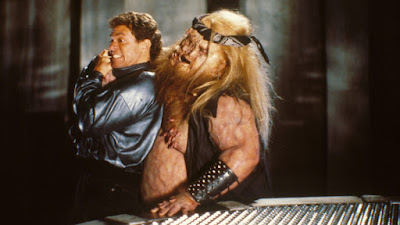 Adam: #1: Dead Heat (1988)
Patrick: #2: Bordello of Blood (1996)
Patrick: Trailers/Shorts: Zombieland, Phantom of the Mall: Eric’s Revenge, Spiral: From the Book of Saw
Patrick: Theme: Comedians in Horror Movies
Patrick: When I was writing for About.com I had a whole master list of comedians in horror movies that I would put on the front page every October. Now I’ve forgotten most of it, which is how Zombieland gets into the trailer block. Joe Piscopo is easily the worst part of Dead Heat because he’s so unfunny in the role, but I love his casting if that makes sense. I would for sure go see this double if it was playing near us.
Adam: Dead Heat is at the top of my stack of movies to watch in October. I can’t wait! This is a really fun theme. I think I’ve seen Bordello of Blood more times than anyone else in Illinois. Or at least tied for the lead.

Patrick: #1: Body Parts (1991)
Adam: #2: The Lawnmower Man (1992)
Adam: Trailers/Shorts: The Last of the Finest, White Hunter Black Heart, Wyatt Earp, Darkman III: Die Darkman Die
Adam: Theme: ‘90s Jeff Fahey
Adam: I’m pretty sure Body Parts is the most programmed movie of all-time at our theater. I say this as a compliment. I love Jeff Fahey, so having an evening in his honor sounds good to me. He seems like such a guy you’d meet in real life who just happens to be a movie star. Plus, both movies are underrated! Especially The Lawnmower Man, which is exquisite. Have you ever seen The Last of the Finest? I’ve almost watched it several times.
Patrick: I have seen Last of the Finest! It’s a decent cop programmer with an amazing cast. I can never remember what has been programmed in the past, so I didn’t even realize we’ve played Body Parts before. I’m the worst. I think it’s funny how much horror we programmed this month. You can tell we’re both ready for October to get here.
Adam: You’re not the worst. I just want to keep programming Body Parts now that I know it’s becoming a thing. It’s the era (era) of Friday Night Double Features. And yes, it’s late August. I only want to watch Horror right now.
Posted by Patrick Bromley at 5:00 AM