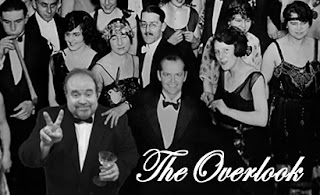 Our time together is short, and this Ghost of Christmas Past has loose ends to tie up, babies.

This is the 52nd and final “Overlook” column. Dry your eyes and stop your sniffling—all good things must come to an end. I hope you, gentle babies, have enjoyed these columns as much as I have enjoyed finding genuine rarities, ripping them open with my oversized canine teeth, devouring them with fava beans and a nice Chianti, and reporting back about the quality of my meal. It has been my privilege to share these good, grim, and goofy films with you in 2015.

I present below the final “tally” of our year together—a list of the more than 50 films I have written about in this column, subdivided into three easy categories: films to seek out, films to maybe watch on a rainy day, and films from which to flee at top speed. If any of you wish to read or re-read the original columns, you can look them up on the “Movies A-Z” tab; also, the handy search box up top there on the left is fully functional (because we here at FTM are all about service to you, the reader.) Anyhoo, here’s the breakdown:

BOTH THUMBS WAY UP
The Missouri Breaks
Dave
My Winnipeg
The Swimmer
The Prowler
Day of Anger (I have since read an interview with the restoration team at Arrow Video about the particular challenges involved in restoring this title. It makes me love this disc even more.)
Showboat
Thank Your Lucky Stars
1776
Man in the Dark
Kiss Me, Kate in 3-D
The Hole in 3-D
Pennies From Heaven
Cemetery Without Crosses
1941
Let It Be
The In-Laws
Nightmare Castle
Three Strangers
Horrible Horror w/Zacherle, the “Cool Ghoul”
Monsters Crash the Pajama Party
Dr. Shocker’s House of Horror
Star Wars De-Specialized Version
Deep in My Heart
Romance and Cigarettes
Voodoo Man
Remember the Night
BFI Film Monographs
The Devil’s Advocates Horror Film Book Series
The Movie Kid’s Graduation from AFI

MEH
Stuart Saves His Family
Annual Oscar Telecast
Four of the Apocalypse
So Fine
The Devil is a Sissy
The Osterman Weekend
Who’s Minding the Mint?
3-D Rarities
Harry in Your Pocket
The Big Picture

NEVER NEVER NEVER NEVER EVER
Wicked, Wicked
Swedish Love Girls, aka The Psychic, aka Copenhagen Psychic Love
The Fortune
Liszt-O-Mania
Whiffs
Jonathan Livingston Seagull
Jess Franco Double Feature: Vampyros Lesbos and She Killed in Ecstasy
Dynamite Chicken
Cracking Up
Color Correct My Cock (Do I need to apologize again for this one? I am apologizing again for this one.)
The Mask in 3-D

If anything, the above tally proves beyond a shadow of a doubt that I discussed more worthwhile movies this year than stinkers. Yet the stinkers are so much fun to write about, rant about, and decry, that those are the columns that seem to cleave to everyone’s subconscious.

TANGENT: At the beginning of the year I took some time to map out the films that I was planning to discuss. When I look back on my notes, I am amazed and surprised by all the things I did NOT get around to writing about because they either did not strike my fancy (I’m a fickle, fickle S.O.B.) or because something new and obscure had just been released by our friends at Scream/Shout Factory, Warner Archives, Olive Films, or Arrow Video. I kept to my original list until the end of April, and then, apparently, all hell broke loose!

The films I never quite got around to discussing include Dragonfly Squadron, Inferno, and The Bubble (all in 3-D!); Union Station, Dark City, Appointment with Danger, and Rope of Sand (all film noir, though I felt I had returned to that deep well perhaps once too often); The Great Gatsby (the rare 1949 version with Allan Ladd, which is presented as a murder mystery!); plus Mishima, Choke, Bigger Than Life, Brain Damage, Bye, Bye, Braverman, Yogi and the Space Bears, Slapstick (of Another Kind), and Doctor, You’ve Got To Be Kidding. These are all real films. If you really miss this column, why not check out some of the ones I missed and report back to everyone in the Weekend Weigh-In? Be there for each other, babies, and you’ll get through this together.

My biggest regret is that I was never able to finish my epic Wheeler and Woolsey column. Wheeler and Woolsey were a reasonably popular comedy team from 1930 to 1937, now largely forgotten (many of the writers on Marx Brothers’ films also wrote for Wheeler and Woolsey.) I assembled a collection of twelve of their films. I only made it through three and half: Peach O’Reno, Diplomaniacs, and Hips, Hips, Hooray! Again, these are all real films. They are also the worst: smutty, obvious, unfunny, and indeed, a little creepy.

I am oh-so, so-so, so, so glad that writing these columns gave me a chance to screen, ponder, and talk about all of these amazing films. I am glad that my wife is patient with me and an excellent copy editor. I am glad that, even when he doesn’t like a particular column, Patrick Bromley seldom withholds my weekly payment of a ten-buck “maintenance” chunk of low-grade, black tar heroin. I am glad that some of you enjoyed the ride. I am glad for all the people I have met and the experiences I have had because of my association with F This Movie!.

So now, babies, gather around the imaginary bar that Stephen King created in The Shining, full of ghosts, in the haunted Overlook Hotel that lent this column its name, as Ol’ Blue Eyes himself, Frank Sinatra, comes back from the dead and grabs the microphone in his skeletal hand, just to play me out…

Pardon me but I got to run
The fact is uncommonly clear
I got to find who's now the number one […]
Excuse me while I disappear.”
Posted by Patrick Bromley at 5:00 AM